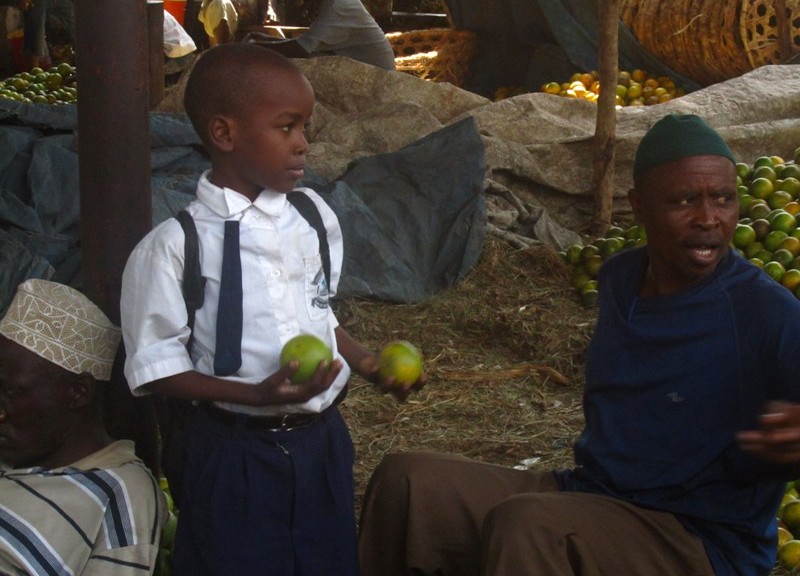 I am nine days into my current international assignment: this time in the east African country of Tanzania.  I spent the entire first week in the country’s commercial capital, Dar es Salaam, which means House of Peace.  And since I have been neither mugged nor molested I believe the name rings true.

There are 120 tribes in Tanzania and I guess nearly that many languages.  However one can get by in the cities with English – – thank you British colonialists.  In the countryside Swahili is spoken by most people as either their first or second language.  Consequently I have been pouring over my Speak Basic Swahili book.  I think I will do quite well: computer is kompyuta , television is televisheni .  Dining room and bedroom are nearly as simple:  sehemu ya kulia and chumba cha kulala respectively.  I should be fluent in no time.  Except that the grammar is tough for me.  And just in case my Swahili doesn’t improve quickly enough, I have been assigned a Swahili interpreter to accompany me to my meetings.

On this assignment I am again working with CNFA, the NGO that sent me to Malawi and Mozambique previously.   I have been tasked to evaluate and help improve the operation of Tandale, the country’s largest wholesale grain market, based in Dar es Salaam – – Dar for short.  Discovering shortcomings in the market has been simple.  I merely visited Tandale and walked around.  The roof has holes in it allowing rain to pour through onto the bags of rice, corn, and legumes.  Soggy grain loses value quite quickly.   The dirt floors are not conducive to keeping food clean for human consumption, especially when the dirt turns to mud.  Interior aisles are narrow, crowded, and labyrinthine, making navigation difficult for the porters carrying 220 pound grain sacks on their backs.  Surprisingly there are few reported injuries among porters, but there is high incidence of tuberculosis in that group.  On the bright side, Tandale Market management has set up several pool tables for the porters to enjoy between hoisting very heavy loads.

So I figure my essential task is to prioritize the needed improvements.  Someone else will have to figure out where the funding will come from.  And this is always the biggest challenge in poor countries.

I have met with officials high and low: senior staff in the Ministry of Agriculture, Ministry of Trade, the mayor’s office, leadership of the market, trade association leaders, produce vendors at the market, even the market’s two custodians, as well as the ladies who cook lunch for the vendors.  These ladies are referred to as the “Nutrition Mamas.”  All agree on the changes to be made.  However, none of them is quite sure where the money will come from.  Leaving this intractable problem aside for a while, I have headed into the Tanzanian countryside to meet with farmers and crop traders who supply the market and also with management of other markets to see if I can glean some beneficial ideas to transfer back to Tandale.  This stage of my journey will appear in later postings.

Just so you don’t go away ignorant of Tanzania, I offer the following:  To find Tanzania, locate the equator, follow it to Africa’s east coast (Indian Ocean coast) then look slightly south.  It is a big place, about 1.5 times the size of Texas; and at 43 million people, its population is comparable to Texas and New York combined.  But it is poor, GDP/capita rank is 202nd of the 228 countries in the CIA World Factbook.  (It seems I haven’t been invited to work in a wealthy country yet.)

As you know, Tanzania is famous for its herds of wildlife.  While I will not be going on a safari during my stay, in my next report I may tell you about the giraffes and zebras I saw beside the highway.  You’ll just have to stay tuned.

One thought on “Grit in the Grain”