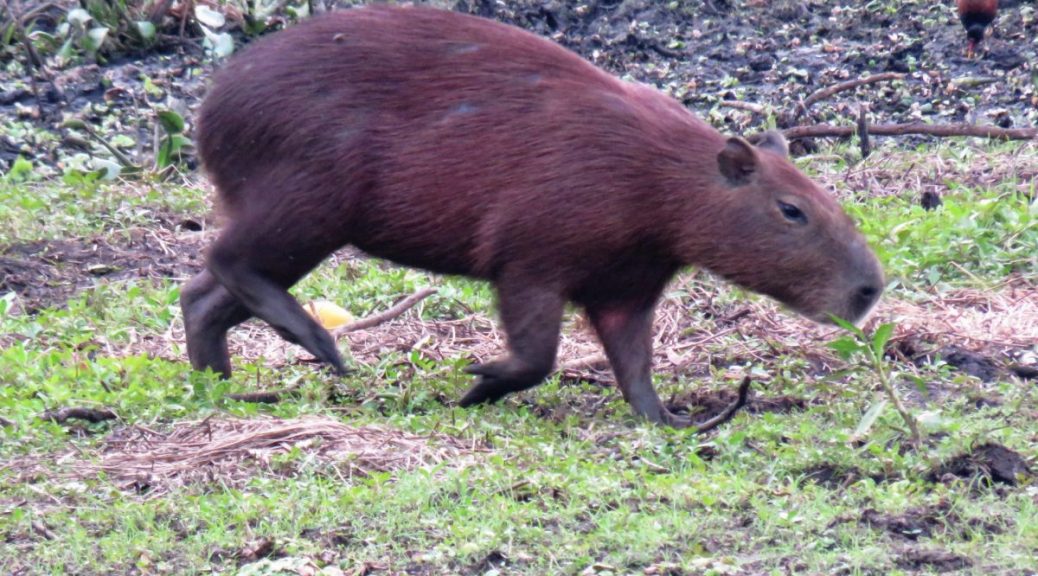 My first assignment in Colombia was six years ago.  I have now completed my second.  This time I am working in Arauca, a town of nearly 100,000 just across the Arauca River from Venezuela. Due to unrest in Venezuela and poor relations between Colombia and its neighbor, the border is officially closed. Occasionally, one can get special permission to cross a military-controlled bridge near the center of town. But for the most part, the border is closed. However, standing on the Colombian side of the river, I could watch dozens of canoes taking locals back and forth across the river.  The canoes carry traders and smugglers across the liquid border. A small bribe to officials on both sides will allow for these illicit crossings.

Illegal trading aside, about two million Venezuelans have fled to Colombia from their petro-klepto state since quasi-dictator Maduro came to power. Many of these two million have entered Colombia via Arauca.  And an influx of refugees and displaced people has led to security concerns in Arauca. Consequently, I see well-armed soldiers and policemen patrolling the town.  That said, I feel safe and comfortable here. Night and day I can walk around town needing only to be aware of speeding motorcycles…they are everywhere.

My assignment has nothing to do with refugees or speeding motorcycles. I am working with a non-profit team from Microfinanzas El Alcaravan. Our team consists of the director of communications, the customer service coordinator, and two loan officers. We are writing a marketing plan for their micro-finance institution.  Such micro-finance companies make loans to small businesses, farmers, and ranchers in town and in the surrounding rural areas.  In the very poor countries of Africa such loans may be around $200.  However, Colombia is a middle-income country and a micro loan from my client will range upwards to $5,000. The purpose of small loans to pocket-sized businesses is to increase opportunities for poor people to achieve financial inclusion.

Microfinanzas El Alcaravan has made micro-loans to around 4,000 customers. So that I could better understand the type of customers they serve and to learn their loan process, I visited three local customers: A dressmaker, a mini-market, and a poultry feed business. The latter was on his first loan, money needed to purchase more stock for his store. The dressmaker had borrowed twice to increase the selection of fabric she used to make her clothes. And the mini-market owner was a star customer.  Over several years she had borrowed from my client eight times and repaid every loan on time. Each business appeared to be thriving during my brief visit. All three raved about the service they had received from my client. I prompted them to make marketing suggestions for my client. Primarily, they said, “Lend us more money so we can grow our businesses even faster.”

After our team completed the marketing plan we were asked to assist an affiliated company, a startup chocolate factory, craft their own plan. This was truly a startup business: just two employees. They were seeking to launch their own brand, Alcaravan Chocolate, and to secure orders for private label manufacturing. We were able to tweak our original outline for the micro finance plan and apply it to the chocolate business. One substantial difference in my work with the two plans was that I got free chocolate from the latter client but did not get free microcredit from the former.

Four work colleagues and I took our lunch break at an open air restaurant serving local dishes. I ate capybara.  Capybara is the world’s largest rodent . Roughly the size of a pig (see photo) . The good news is that with a rodent that size, the five of us had plenty of lunch.  For those of you who want to try capybara, come to Colombia.  However, if you live in New York you can easily sample a large rat and save on the airfare to South America.

Another day they convinced me to try grilled armadillo.  It was quite tasty, but separating the meat from the armor was like working on an oversized lobster tail.  Later that day I had second thoughts about what I had eaten so I visited Mr. Google and learned the following: There are five species of armadillo in eastern Colombia.  Two of the species are threatened.  I just hope I was served one of the unthreatened species.  Nevertheless, I have vowed to never eat armadillo again just to be certain I am a good steward of the earth.

And if meals of capybara and armadillo weren’t a sufficient cultural immersion, I had one additional experience: Chimo. This is a tobacco derivative made from the best hand-selected tobacco leaves, boiled and mixed with wood ash from the tiger beard tree. The consistency is toothpaste.  The taste is not. A local guy will purchase chimo in a paper tube, squeeze a toothpaste sized dollop onto his tongue, and work this stimulant around his mouth for an hour or so. From time to time he will spit out a disgusting stream of deep red spit.  His teeth and gums will be colored crimson as well.  I touched the tip of my tongue to a micro-dot of chimo and vowed – – just as I had pledged previously with the armadillo – – never again.  This time the reason was taste not a threat to nature.