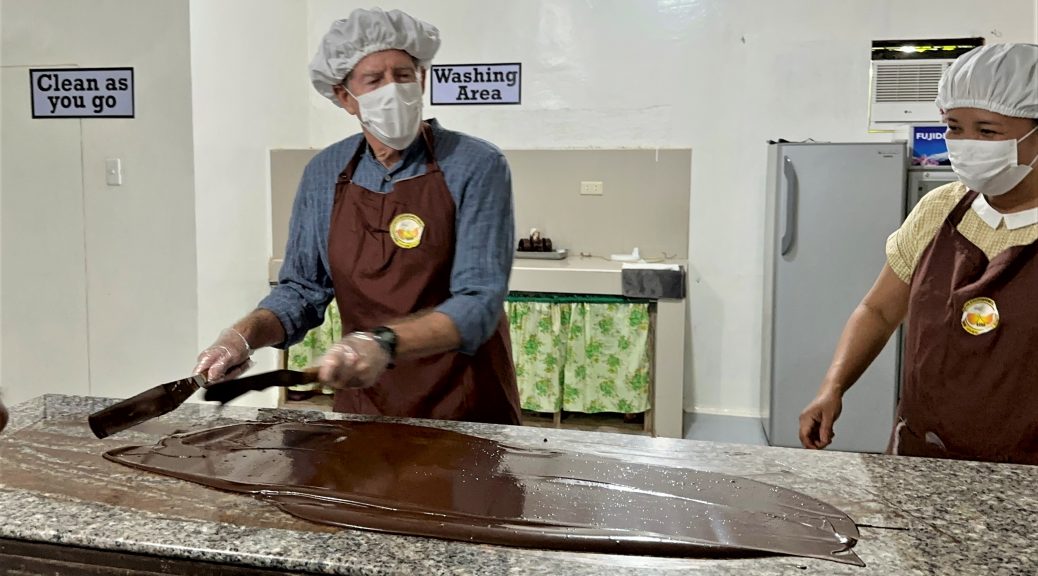 And it’s safe where I am, over 400 miles and an expanse of water from the heart of the unrest.  I even checked with a college classmate who was in the Filipino Army about the safety here.  He said good to come, so I came.

I have passed several highway billboards displaying the photographs of 15-20 wanted terrorists.  One giant poster read, “Wanted, Dead or Alive.” It felt like the wild west.  But once again, I am in an entirely safe part of Mindanao.  And Mindanao is that large island in the far south of the Philippines. The second largest of the country’s 7,600 islands.

My assignment this time is with a cacao farmers’ co-op.  Cacao is the raw crop that, after several processing steps, ends up as a chocolate candy bar…or as other chocolate products including, and I’m not making this up, vinegar, breakfast porridge, tea, wine, cosmetics. I got to try the vinegar, tea, and porridge.  I still like chocolate bars best.

Six months before I arrived, the co-op had engaged another volunteer to help them with product line expansion.  The flavors currently on offer are dark chocolate, milk chocolate, mint, hot spicy, nutty cashew, caramel, choco-espresso and choco-latte. I felt no need to add more.  In fact, I was brought here by my NGO, Grameen International, not to review the product line, but to analyze the co-op’s business initiatives and recommend improvements.

One situation cried out for solution.  A government bank issued loans to over 700 of the co-op members; the money was used to expand cacao production.  All but four loan recipients have either defaulted on their loans or are years past due.  When nearly 100% of the loan recipients cannot repay, there is something wrong with the program design, not with the loan recipients. The farmers are not making enough money from their farming activities to repay their loans. Working with management we developed a roadmap to use to approach the lending bank to request a freeze in the farmers’ repayments. A freeze would allow the farmers to make a living from their crops without the threat of onerous payments hanging over their heads.  I will find out later how the bank responded to our roadmap.

So that I could better understand their business, the CEO took me to one of their farms. I observed how to prune the cacao trees to allow sunlight to reach the ripening pods. How to graft a young shoot onto an existing trunk to extend the productivity of the cacao tree.  Also, how to slip a biodegradable plastic bag over each pod to protect from pests.

I interviewed the farm owner, a woman in her mid-60s.  When it came time for photos, I tongue-in-cheek suggested she climb into the cacao tree.  Sometimes my humor is a bit too literal for use in other countries.  She began to climb.  I quickly stopped her, not wishing responsibility for OSHA-required injury paperwork.  However, she was the best mid-60s female tree climber I have ever met.

Later at the chocolate processing facility they had me remove my shoes and don a cook’s toque, apron, face mask, and sanitary plastic gloves so that I could temper the chocolate. (See photo) Before molding into bars, one must continuously smooth the chocolate on a granite-topped table. This action removes tiny air bubbles in the chocolate. And tempering is only one of a dozen or so processing steps, cacao pod to candy bar, necessary to satisfy the public’s collective chocolate addiction. Worth noting, I never did get the hang of tempering, the production staff had to repeat my efforts. Chocolate making is not easy.

The Filipinos love karaoke. One night they took me to a karaoke studio where I attempted to sing a song in Visaya – – one of 120 distinct languages spoken here.  Since Visaya is a relatively phonetic tongue I was able to more or less read the lyrics.  Still couldn’t carry a tune though.  Singing is not easy.

Some restaurants have armed door guards. I went to one such eatery in Kidapawan, my assignment city.  The guard seemed thrilled to see a westerner – – I saw no other westerners in Kidapawan – – so thrilled in fact that he left his post at the door to seat me, then bring me water, and later a menu.  Normally wait staff would perform these duties.  And normally a guard would spend his time guarding the door or chatting up the waitress.  But for a brief while the door went unguarded and the waitress un-hit-upon.

Each day the office cook would bring me sikwate (hot chocolate) and putomaya (sticky rice sweetened with coconut milk) as a mid-morning snack. This was only one of many rice offerings throughout the day. The Filipinos eat rice three times daily, or occasionally four.  I’m not a big white rice fan so I would mix it up by occasionally ordering rice noodles, rice crackers, or rice cakes.  It’s pretty hard to avoid a rice-centric diet here.

I did eat one non-rice dish.  Balut.  This unusual fare (unusual to Americans, not to Filipinos) is merely a boiled duck egg.  With a partially formed duck embryo inside.  I tried it, didn’t much like it, and have since eliminated it from my list of good things to eat. I will not be bringing any balut home with me.

One thought on “Chocolate, Rice, and Balut”