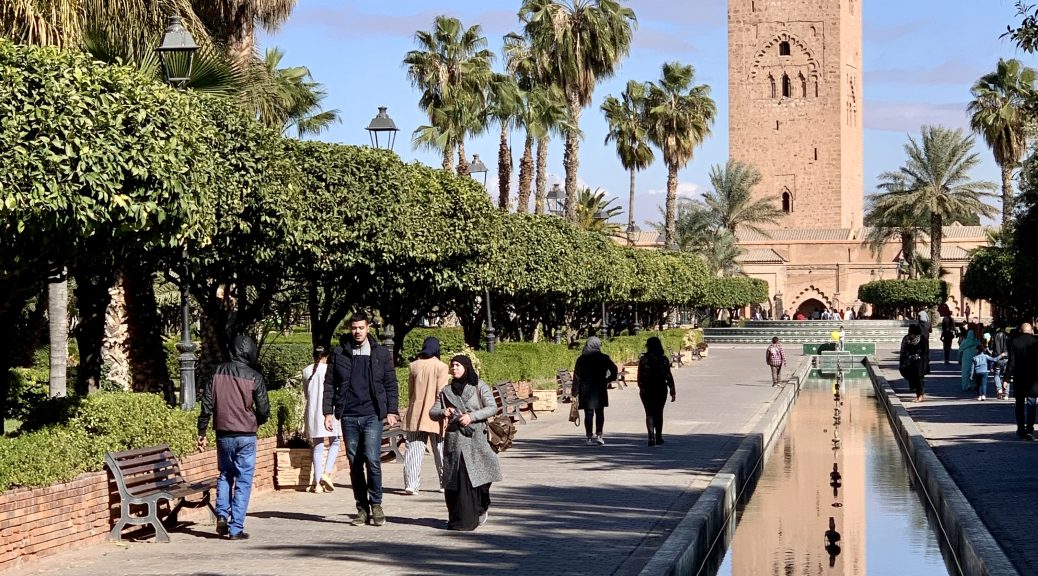 I am just now completing a 15 day volunteer business assignment in Marrakech, Morocco.  Two years ago I conducted just such a gig in Marrakech as well. My client this time is again, the High Atlas Foundation (HAF), a United States and Moroccan NGO. HAF’s core mission is the operation of 11 tree nurseries in Morocco. These nurseries provide fruit and nut trees at no- or low-cost to communities, schools, hospitals, and small farmers. Recipients of the trees earn revenue from the resultant fruits and nuts, use the trees as windbreaks, and, at schools, provide lessons in agriculture for students.

My specific assignment has been to evaluate four of HAF’s tree nurseries, determine their needs – – especially impediments to their growth – – and propose follow on activity to address their needs.  Each nursery had its own special set of needs. Some are beyond my expertise so I am developing recommendations to HAF to bring in expert volunteers to support areas where I am deficient.  For example, HAF will need a cost accountant to establish tracking of financial results and to calculate payback of greenhouse construction. Other needs include soil analysis, nursery operations, and cooperative leadership and management.

One of the nurseries I evaluated, Tassa Ouigane, is run by a women’s cooperative. This female co-op was granted the franchise to manage the nursery about one month ago without any prior training.  To ensure that this group is not being set up to fail, HAF has already conducted lessons in cooperative management for the women as well as introductory nursery operations classes.  I did my small part by delivering marketing and sales instruction.

The Moroccan Ministry of Agriculture has established a goal of planting one billion trees in the country.  I suspect no one thought to run the numbers to determine that planting so many trees would actually take close to 1000 years.  But on the positive side, it does provide an attention grabbing aspiration. And HAF is doing its part to chip away at that one billion tree goal.

After viewing four existing nurseries for HAF, I was asked to conduct a site visit to evaluate land for a prospective new nursery.  But there was a special twist to this land.  It is currently occupied by a 300 year old Jewish Cemetery.  The Jewish population of Morocco has dwindled from 250,000 after World War II to about 900 today.  The small but active remnant community has discovered that offering old cemeteries to HAF as tree nurseries actually helps to preserve the cemeteries as historical and memorial sites for diasporic Jews to return to and visit. As long as no gravesites are damaged by nursery activity, the disused cemeteries actually receive refurbishment and ongoing care from a caretaker who oversees both the nursery and the cemetery.

HAF does more that grow and distribute trees.  It provides community services to poor villages.  For example, one rural hamlet in the High Atlas Mountains has no nearby source of clean drinking water. Consequently, the village girls (but not the boys) spend 16% of their time fetching water from a distant source. Of course such a time consuming daily task cuts into their education.  In fact, not a single girl in the village attends school beyond the sixth grade. HAF has offered to pay for and install a clean water source in the village.  Just one caveat: every household in the village must sign a binding contract that they will send their daughters to class beyond primary school.  All families must sign on before HAF will pay for the water. As of my writing, HAF is expecting their collective response any day now. Positive we hope.

One morning on the road to visit a tree nursery we stopped for breakfast at a roadside café. And this wasn’t just any roadside café. Their standard breakfast is famous in these parts. One doesn’t order, you just sit down and they bring you mint tea, chick peas, lentils, fried eggs, olives. Also no utensils, but bread to sop up the breakfast offerings. Quite delicious. Oh, and one more item: boiled cows’ feet.

Now I’m not a big consumer of beef but I figured this was mostly just fat and keratin. Anyway, my hosts were digging in so I followed suit.  What starts as a cow’s hard hoof, once boiled, is soft and mushy.  It is gelatin, mostly used in pet food but sometimes served in Moroccan roadside eateries. It is also an ingredient in marshmallows.  Look it up, I did. I do not plan to repeat this gastronomic experience, but at least I tried it once.

I suspect some readers of this space carry a degree of alarm about (my) personal safety while working in a Muslim country.  I will even admit to a minor pang of worry as an American prior to accepting this assignment.  But now it is time to put everyone’s minds at ease.  It is time to put safety in perspective. The US has the 39th highest murder rate in the world out of roughly 190 countries.  Morocco has the 144th highest.  Conclusion: safer in Morocco.  The US suffered 65 terrorist events on its soil in 2019, with 95 deaths.  Morocco experienced 0 such events and 0 deaths.  Conclusion: safer in Morocco.

The only thing is that I felt socially pressured into eating gelatinous cows’ hooves in Morocco. Conclusion: less pressure in the US.

4 thoughts on “Tree Nurseries Have Needs Too”