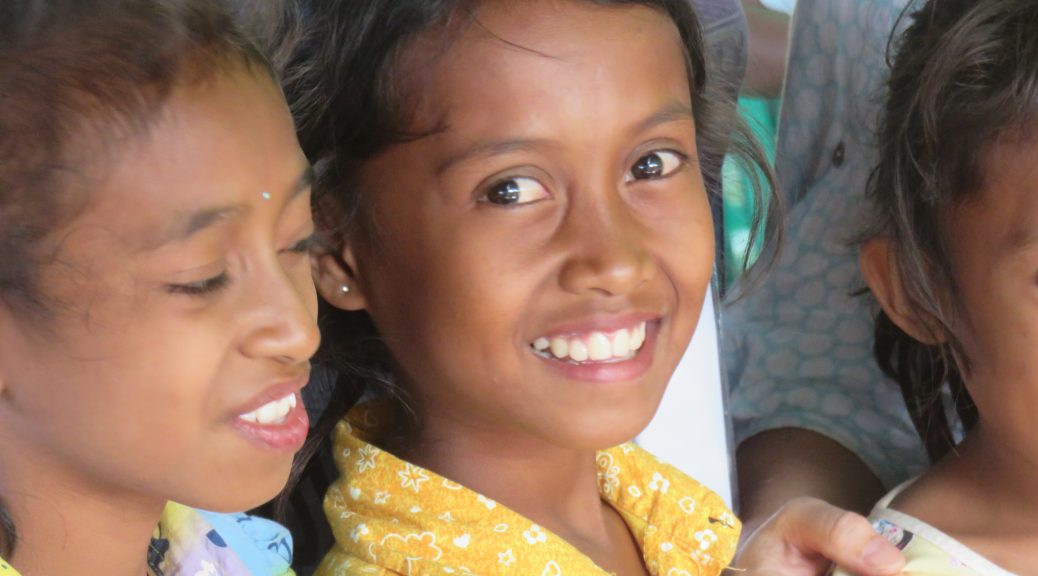 On my flight into Timor Leste I sat next to an Australian dentist.  She comes two times each year to provide pro bono dental care to Timor Leste’s 1.2 million inhabitants.  I doubt she gets around to them all.  Nor do the seven resident dentists, six of whom reside in the capital Dili.  That means outside of the capital of 200,000 there is one dentist to serve the remaining one million people in a country the size of Connecticut. It is safe to assume that most people will never see a dentist in their lifetime. Some people brush with a tooth brush.  Some with the blunt end of a soft and fibrous stick. Some do not brush at all.  There is not a lot of dental hygiene taking place in this very poor Asian country.

When I arrived in country several people greeted me, “hello maun.”   I suspected they meant to say, “hello man,” but mispronounced it.  However, I soon learned that maun is a local Tetun word literally meaning brother but is used as an honorific.  Not as strong as the British, “lord,” but stronger than “sir.”  The female equivalent is mana. The people I work with call me Maun Bill or Mister Bill.  I am honored.

My client, ACELDA company, runs a factory that produces rice, soap, and candlenut oil. For businesstripstotheedge.com bonus points, what is a candlenut?  Such nuts were unfamiliar to me until I took on this assignment.  The candlenut tree grows in tropical climates, which explains why I am not familiar with them in Boston.  When pressed the nut yields about 50% of the its weight in oil.  In the old days the oil was burned in lanterns, hence the name, candlenut.  Today it is an ingredient in lotions and soaps.

The factory gets its nuts from 750 candlenut farmers who receive $0.40 per pound.  This translates into less than one penny per nut. Coincidently that is what I used to pay my kids to pick up fallen chestnuts in our backyard.  Farmers do not really cultivate and harvest the nuts.  The trees grow semi-wild.  Candlenuts fall from the trees when they ripen in November.  Usually women and children collect them from the ground, crack the outer shell – – soft, a bit like a chestnut – – by placing the nut on a rock and striking it with another rock. They extract the inner nut, then bag their collection for delivery to ACELDA’s oil pressing facility.

The founder, Mr. Higino, started his business in the late 1970s.  At that time Timor Leste was in the throes of a war of liberation to free themselves from Indonesian occupation.  Higino used his candlenut transportation activity to disguise the movement of freedom fighters and materiel from the notice of the occupying Indonesians.  He was never caught.  Timor Leste broke free from Indonesia in 1999. Now his business has expanded from being an aid to the resistance into a bona fide producer of candlenut oil which he sells to cosmetics makers in Hawaii and China.  Higino asked me to help ACELDA develop market outreach skills to find additional customers.  He also asked to improve marketing knowledge among his staff.

I have worked with a Timorese translator to allow me to communicate the finer points of marketing. Like the need for a big ACELDA sign in front of their shop.  Several hundred people pass by the store daily and nothing tells them that ACELDA is here. The passersby just see a large building. I recall a sign maker in my childhood hometown who had a logo posted in front of his shop, “A business with no sign is a sign of no business.”  I am trying to help ACELDA find more business.

Finding more business requires me to teach in a language that the staff understands. It is not Portuguese despite 450 years of colonial rule by Portugal.  Portugal terminated its colonial control in 1975 but that language is still taught in school.  While most Timorese receive many years of Portuguese language schooling, few speak it well. At home and with friends they speak one of Timor’s 32 indigenous languages. If they need to speak with someone from another language group they will not use Portuguese.  They will turn to Tetun – the lingua franca of the country.  Tetun contains many basic Portuguese words: Thank you, yes, no, good morning. And also some Indonesian words, but it is mainly a Timorese-based language.  So, my 20 words of Portuguese and 0 words of Indonesian don’t get me too far here since I don’t understand Tetum. Good thing Agapito, my translator is fluent in Tetum and English. And not bad in Portuguese.

One day after work Higino offered to drive me 30 minutes to my hotel in town. Partway there he suggested we stop by his retail shop along the road.  He pulled over and we both exited the vehicle.  But then he apparently changed his mind, got back into the car, and drove off.  I was left standing by the side of the road. After a 20 minute wait I saw him hightailing it back.  He apologized profusely for deserting me.  He explained that he was sure I was seated next to him carrying on a conversation.  He claims he talked to me – – or so he thought – – for the next 20 minutes until he realized I was not with him in the car.  He later concluded that he had been speaking with my spirit.  I was not aware that I had physically exited the vehicle but left my spirit behind.  Next time I will be careful to take all of me.

Speaking with my spirit for 20 minutes is an example of other worldly beliefs by the Timorese that we in the west don’t always understand.  Another example: Talking to my work colleagues I learned that even though there are plenty of crocodiles in the sea around Timor Leste and the meat is pretty good, most people will not eat these reptiles. They believe crocodiles are their ancestors.  If someone were to eat the meat, he would afterwards perform a purification ceremony to cleanse his guilt.  I did not have the courage to tell my colleagues that I have eaten alligator in Florida. And I don’t feel particularly guilty about it.  But I do apologize if it was your ancestor.