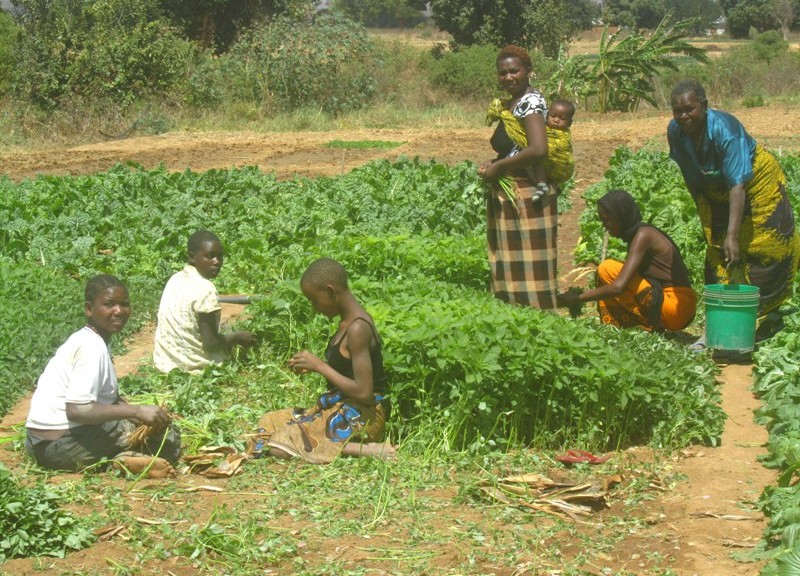 I reported in my last post that my assignment is to help improve the operation of Tandale (wholesale grain) Market in Dar es Salaam. After one week in Dar, I moved to the Tanzanian countryside to meet with farmers and crop traders who supply the market and also to speak with management of other markets.

I did not book sufficient time on this trip to take advantage of Tanzania’s spectacular wildlife parks.  However, Tanzanians naturally want to show off their country.  So, on the way from one business meeting to another, my Tanzanian colleague suggested we take a 90 minute detour through a nearby national park.  While not a full-fledged safari experience, in this short time we were able to see giraffes, zebras, gazelle, wildebeest, elephants, baboons, savanna buffalo, hippos, and crocodile.  Sort of reminded me of the time on a business trip in the US when I saw cows, horses, and a farm dog all on the same day.

The land here is rich even if the people are not:  green fields of crops and trees laden with fruit.  The villages are vibrant and colorful, but there is no electricity or running water. The bicycle is the favored mode of transportation in the countryside and also serves as the beast of burden.  One would expect the poor country folk to dress in rather worn clothing, but the opposite is the case.  The rural poor men dress in business casual even though they spend their days walking and working along very dusty roads.  Slacks, neat collared shirts, and (dusty) dress shoes are the norm. Most were dressed more up-market than I, and that was embarrassing.  They generally look sharp even if they own only three sets of clothing. I saw very few ragamuffins about, even in the poor countryside.

A rural woman wears the iconic colorful (and loud) African print textile wrapped around her torso.  Those with babies, use a second textile to hold the baby close to her back, papoose style.

Near the country’s capital, Dodoma, are a cluster of farms that raise a rainbow of fruits and vegetables: eggplant, Chinese cabbage, tomatoes, peppers, mangos, papaya, spinach, and many, many others (quite a few of which I have never encountered in the U.S.)   The fields require irrigation in this relatively arid region of Tanzania.  And since there are few wells here (expensive to drill and maintain), the farmers have bunched their fields along 10 miles of river bank.  The river itself is seasonal, and in August when I visited, the dry season had turned the river bed into a long stretch of very dry sand.

But the crops still need water.  So the farmers dig wells by shovel and hoe in the soft sand in the river bottom.  A typical well is perhaps 10 feet deep and 20 feet in diameter.  Water seeps through the sand and collects in the bottom of the well.  To reach the water, the farmer will dig a sloping trench so that he or she – – there are many female farmers here – – can walk down the slope with buckets to fill and carry to nearby fields.  (To picture a well, imagine looking down on an uppercase Q ) Over the course of the months-long dry season, the farmer will have to enlarge his well, wider and deeper, multiple times; and of course, re-cut his ramp to reach the receding water.

The farmers seem to manage this bucket irrigation scheme relatively well.  Weak pun intended.  But they would benefit from mechanically drilled deep wells, pumps, and piping to increase their productivity.  However the greatest challenge they face is transporting their crops to market.  The largest market for their produce is Dar, 250 miles away.  The farmers own no trucks, so they send bags of produce in the baggage hold of large cross country busses that ply the highway between Dodoma and Dar.  These busses are notoriously unreliable.

Using Chinese cabbage as an example here is the drill: the farmer harvests and bags the cabbage on Day One, then carries it to his home by bicycle where he sprinkles water on it overnight.  (Dried, wilted cabbage commands no premium in the marketplace.)  On Day Two he or she re-bags the cabbage, surrounding it with protective and moisture trapping ferns, then bikes the re-bagged produce to the highway to wait for the bus.  If a bus arrives with space in the underside compartment the farmer will pay a fee to have the cabbage carried to Dar where it will be picked up by a broker and delivered to a local market.   By Day Three the cabbage will be displayed for sale in an open-air market.

However, busses don’t always stop along the highway where the farmer waits with his cabbage.  Some stop, but do not have sufficient cargo space to accept the cabbage.  If the farmer cannot send his cabbage to market the day he waits by the road, it will wilt, become unsalable and must be tossed out.  Estimates are that 40% of the cabbage is wasted before it can be put on the bus.  And of the 60% that makes it on the bus, 25% of this will be unsalable: too wilted from the hot cargo hold or perhaps crushed by the suitcases packed alongside.  Thus, over half of all cabbage harvested is wasted, it never reaches market.

So, the next time you are in Whole Foods buying Tanzanian crops, please appreciate what it took to get those crops to you.

One thought on “From Field to Table”