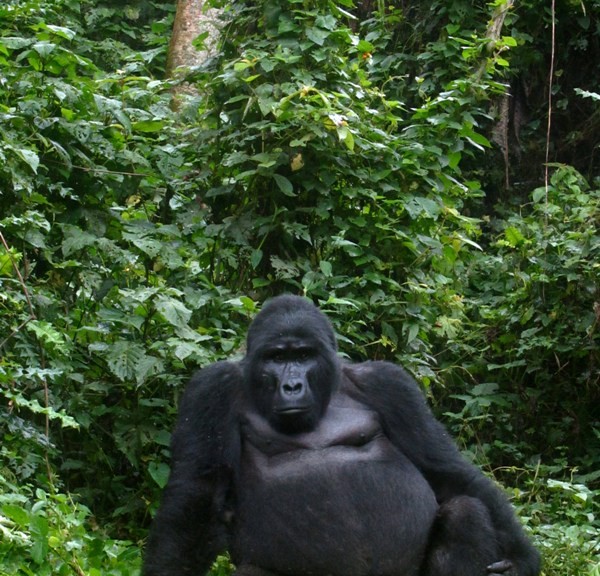 I woke at sunrise to begin preparation for my rainforest trek to encounter my (and your) distant cousins, the mountain gorillas, a critically endangered species with only 700 or so left on earth.  They are found only in a small region of Uganda, Rwanda, and the Democratic Republic of the Congo.  But I am getting way ahead of myself.  Before going in search of gorillas I had to finish my assignment with Tandale (wholesale grain) Market in Dar es Salaam.  I spent nearly three weeks in Tanzania evaluating the market, visiting suppliers of crops in the countryside, and formulating a set of recommendations designed to improve the operations and business of the market.

The recommendations that my colleagues and I put together seemed to be sound.  Our various stakeholders – – market leadership, related trade association members, municipal government, and officials at the Ministry of Industry and Trade – – tended to agree with us that Tandale needed fulltime paid professionals to run the market.  At present an elected committee of six unpaid volunteers oversees market operations.   We also suggested that the market be run by private owners instead of by the local municipal government.  Private business generally operates more efficiently than a government-owned business does.  We also weighed in with a list of physical improvements that would benefit the market…such things as laying a concrete floor over the existing dirt floor, patching the holes in the roof, providing water in the very unsanitary toilets.

So, the business counsel we gave was embraced.  The only real snag was political: the local municipal owner did not want to give up control because the municipality was keeping 85% of all market revenues.  Think of this as an 85% tax rate.  Not even Sweden has that rate any longer.  I am decent at making the business analyses and recommendations.  I am substantially weaker at resolving entrenched political positions in a country and culture where I am an outsider.  Consequently, I made a wise move.  I delivered the business ideas then skipped town and left my Tanzanian colleague, Bahati, to fight the political battle.  Results to be announce someday.

And when I skipped town I flew to Kampala, the capital of Uganda.  There I linked up with a driver/guide to drive me ten hours west to Uganda’s very accurately named, Bwindi Impenetrable Forest.  But, I was feeling rather macho so I anticipated no difficulty in achieving penetration.   Oh, how wrong I was.

On the long drive there we passed papyrus swamps – probably known to you as the source of paper in ancient Egypt, but used today to weave baskets and to make thatched roofs, flooring pads, and even walls for rural homes.  We crossed the Equator near Jandira where I briefly stood with one foot in the northern hemisphere and one in the southern.  Wahoo.

We passed along the edge of a game park where encroaching farmers’ cattle were grazing alongside zebras.  The two were relatively easy to distinguish.  Zebras have no horns and cows have no stripes.  We arrived at our eco-lodge (solar lighting, solar heated water, and local materials used in construction) at sunset.  After dinner, I was given a short pamphlet, Gorilla Rules, and sent to bed.  My favorite was rule #5:

“Sometimes the gorillas charge.  Follow the guide’s example – – crouch down slowly, DO NOT look the gorilla in the eye, wait for the animals to pass.  DO NOT attempt to run away.  Running away will increase the risk of attack.”  Early the next morning our lead trekker reemphasized this.  He said an angry gorilla would jump up and down, tear branches off trees, charge, and pound the ground near us.  That is the sign that we should employ rule #5.

Our group of eight curious tourists (five Czechs, one German, one French, and I) began the trek.  A local lead trekker led us out of base camp into the Bwindi Impenetrable Forest.  His mission was to find the Nshongi group of 23 gorillas who were somewhere in the forest.   The search itself was a major challenge.  We hiked up and down incredibly steep mountains; it felt as if we walked up one side of the Washington Monument only to walk down the other side, then we scaled another.  In all we ascended and descended six steep monuments on our search.  The rainforest smelled particularly fecund and fertile with all stages of plant decomposition evident – – certainly enough decomposition to sustain the 15 inch earthworm that squirmed across our path.  At first I thought it was a baby snake.

Attached to our trekking party was a soldier with a semi-automatic AK-47 and a 30 round ammo clip. They never told us the purpose of an armed escort.  I am pretty sure he was not there to shoot gorillas, after all, they are endangered; and we already knew the defensive measures to take if we angered one.  I suspect that the soldier served as a deterrent to crazy militia crossing the border from turbulent and lawless eastern Congo, just 10 miles away.  In the end he shot no gorillas and the deterrent worked.

After nearly four hours of really challenging hiking – – this was no Sunday stroll around the block – – we struck gold: the Nshongi group of gorillas dining on leaves that they were stripping from the jungle trees.  We were required to keep 20 feet from them to reduce the likelihood of agitation and of human-to-gorilla disease transmission.  But in actually we were sometimes closer.  Like the time we were single filing down the trail and a 300 pound silverback overtook us.  Our guide immediately said, “Quickly sit off the side of the trail in the bushes, do not make eye contact.  Our big relative knuckle-walked right past us, so close we could have touched him.  In fact, I reached out and whacked him on the butt.  When he wheeled around to confront his tormentor, I shrugged my shoulders, gave an innocent smile, and then pointed at the tourist next to me.

By the way, most of this report is true.  Disregard the butt slapping vignette.

Especially true is the emotional rush I got by seeing, watching, listening to these beautiful and massive animals.  They grow quite hefty, some over 400 pounds and all from eating leaves.  Don’t ever let anyone tell you that a vegetarian diet fights obesity.  Actually it does, but just not in gorillas. Several looked like NFL interior linemen.  In all we spent an hour of rapture watching and photographing the group, then we were required to leave so that the gorillas could get back to uninterrupted leaf dining.

Our hike out was nearly as long as our hike in, but felt much easier because we were all on an emotional high.  And even if we had not been able to see the gorillas the rainforest trek would have still been rewarding: we had penetrated the impenetrable forest and we saw a giant earthworm.

I will post photos in a few days. Probably of the gorillas, not the earthworm.