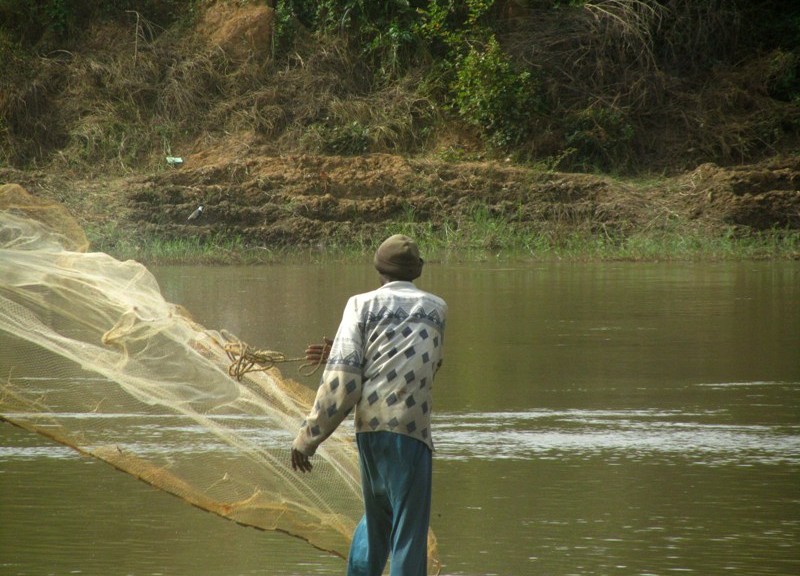 Do not confuse Mali with Malawi in east Africa. (I reported on that country earlier this year.) But you can remove the aw from Malawi and get Mali. Like the other countries I have chronicled, Mali is poor: its GDP per capita ranks 205 of 227 countries tracked – – $1,200 per person vs. $47,000 in the U.S. It is a large country, almost twice as big in size as Texas…but less populated: 14.2 million people live here, 25.1 million live in Texas.

To find Mali, put your finger on Burkina Faso and go north one country. If this is confusing, try moving one country east from Mauritania. Alternatively, head due south from the southern tip of Spain into the bulge of West Africa until you reach landlocked Mali – – shaped a bit like a butterfly in flight. So, you can think of Mali as a big, poverty stricken butterfly. But a beautiful one.

I will be working here for 2.5 weeks, helping a fish farmers’ cooperative. They are attempting to raise tilapia and catfish in hand dug ponds. I think I was asked to participate in this assignment due to my reputation as a talented aqua-culturist. Actually, the aqua-culture talent is Joe Sullivan, like me an American volunteer. His role is to teach the aspiring fish farmers how to build effective ponds and how to raise fish. My job is to help the fish farmers develop their sales, marketing and production plans.

From Joe I learned that tilapia are mouth brooders. After the female lays her eggs, the male will fertilize them. The female will then scoop up the eggs in her mouth, where they will incubate until hatching. She will not eat – – cannot eat – – until they hatch and swim out of her mouth. While still tiny, if they spot a threat, say a wading heron or a hungry catfish, the little tilapia will swim back into mommy’s mouth. This flight to mouth-safety will continue until they can no longer fit there. Fascinating.

The Malians are extremely hospitable. Several times each day, they will interrupt our work to offer strong, hot, sweet tea in a jigger-sized glass. One holds the scalding glass by the slightly less scalding jigger rim and quickly downs the tea. Speed is important because, in this poor country, there are only two or three glasses available to serve five to ten people at a meeting. As guests, Joe and I are usually served first. Once we have finished, the glasses are refilled (no washing) and offered to the remaining people at the meeting. At least I get to drink first. Except that typically a second and even third round is offered. And I feel obliged to partake at each offering, otherwise I would be rude. So far I have not gotten sick.

And I have not gotten sick from the spicy meat brochette they have served us as a daily snack. Thin strips of grilled beef are skewered on a wooden stick, then we rub the beef-on-a-stick in a dry mixture of ground peanuts, millet, chili and other spices. And also, dried, ground goat testicles. They say that final ingredient improves virility. I have taken a second helping every day.

For those of you interested in improving your backyard tilapia ponds, get ready for my intervention when I return to the U.S. And be advised, I have been eating a lot of that goat gonad spice.

One thought on “Enhanced Virility in Bougouni”