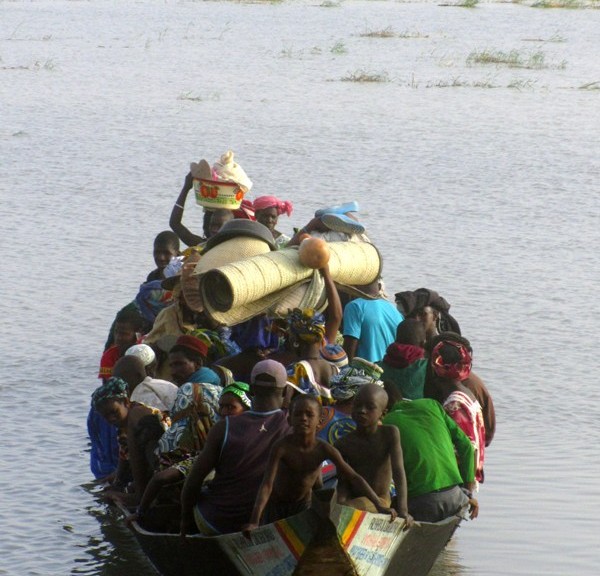 My work in Mali continues. On this assignment I am working with an American NGO: Winrock International, headquartered in Little Rock. I am based in Bougouni, a town of 25,000, in a mainly cotton growing region of southern Mali. I am assisting a newly formed fish farming cooperative with business training.

Bougouni is a regional center of sorts. But despite its importance and its size, there are just three proper restaurants in town. I am excluding the countless roadside stalls – – ten feet off the road – – that have a vat of hot oil to deep fry almost anything, including fly-encrusted raw meat awaiting cooking. The passing trucks and buses on the highway, stir up a fine coat of dust that settles over the food along with an essence of diesel fumes. My Malian colleague and interpreter, Bourama, won’t eat at these restaurants, so I don’t either.

We stick to the three proper restaurants. None of the three has a menu for its patrons to review. The waiter tells us what is available: meat with rice, chicken with rice, fish with rice. Pretty much day in and day out, lunch and dinner. So we are applying a restaurant and meal rotation plan: never the same restaurant nor the same dish two meals in a row. Variety is the spice of life.

Many days I spend in Toula, a small village just ten miles outside of Bougouni. The members of the fish farmers coop gather under a large shade tree next to their mud walled compound to listen to my morning business lesson. In the afternoons we usually visit their prototype fish pond to ensure that the fish are still alive. Since my lessons are given outdoors there are many interruptions to deal with. One day during my lesson a hunter from the village walked through our alfresco classroom carrying a shotgun and a recently bagged rabbit – – poor Peter Cottontail. My class erupted with congratulations and praise for the successful hunter.

That day the villagers ask me to stay for lunch. The village ladies cooked up enough food to feed the entire business class. As a visitor I was invited to dine in a nearby mud and thatch hut with senior members of the cooperative. Six of us sat on low stools around a large dishpan full of rice (I think it really was a dishpan shortly before it was filled with rice.) All six of us ate with our hands out of this communal vessel. And we ate the same meal found in restaurants: chicken and fish with rice. But that day, the chicken and fish were augmented by the ill fated Mr. Cottontail. That culinary change of pace was quite welcome. Variety is the spice of life.

A fair number of the villagers who attend my training classes are illiterate, so I use symbols as much as possible when I draw on the flip chart. For example: A fish silhouette with a sun above it to represent dried fish. A small fish with an arrow toward a larger fish to indicate size growth over several weeks of feeding. A fish with whiskers for a catfish. But just how do you represent such business terms as a board of directors with these signs? It is kind of fun trying to think creatively in symbols. Not to brag, but I could have done quite well as the court hieroglyph-ographer during the reign of Ramses II in ancient Egypt. (I kind of slipped that history lesson in without you noticing, didn’t I?)

One of the legacies of French colonialism in Mali is that French is the official language. However, outside of cities and towns (like Bougouni) where the educated speak French, numerous local languages are the means of communication. About 80% of Malians speak Bambara as their first or second language. Consequently, Bourama, my interpreter turns my English into occasional French and more frequent Bambara.

Through all of this I have learned that when working with an interpreter it takes twice as long as normal to share an idea with the audience. And twice as long to learn what their response is. I usually make up for this delay by talking twice as fast…and thinking double time as well. But it really wears me out.

Through all of this, I have trained about 30 people in fish production planning, marketing and sales of fish, how to organize a cooperative, and basics in business planning. And also in symbol drawing.

One thought on “Hieroglyphics Brought to Life”