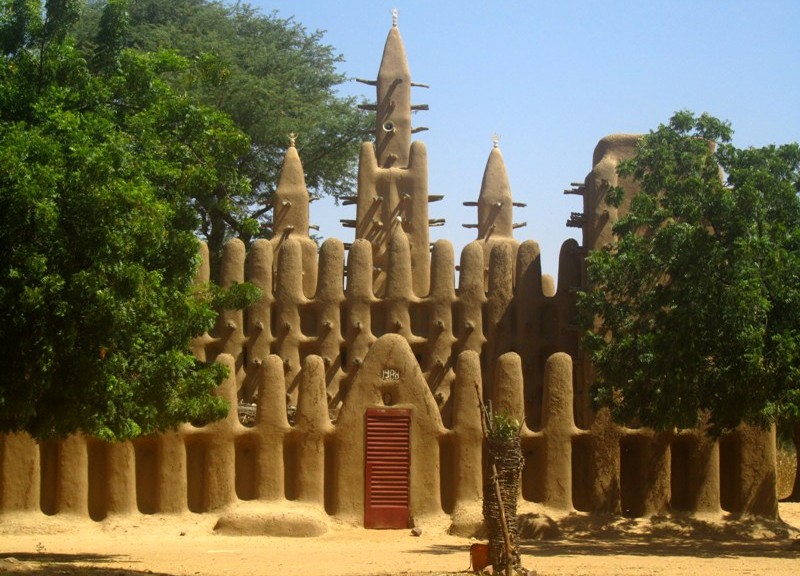 I have finished my work with the rural (aspiring) fish farmers in Toula village, near the town of Bougouni. The farmers’ hope is that their fish ponds will provide additional food for their families, plus some extra to sell at the market in Bougouni. Much of my work entailed teaching basic business topics to these farmers. And much of my teaching entailed dealing with disruptions that one does not typically encounter in an American classroom. I have previously reported on the hunter who passed through our alfresco classroom with his shotgun and just bagged rabbit. This was not the only disruption. I pretty much got used to the crowing rooster, chickens, and guinea fowl scratching in the dirt in front of my flipchart.

As a teaching point I asked the class the age old business question: What is the difference between marketing and sales? One hand shot up, then another and another, soon over half the class had a hand in the air. I thought, wow, these farmers are really business-sharp. But it turned out they were not answering my question. Instead, they were waving at a friend bicycling along the road that ran past our outdoor classroom…and shouting greetings too. As well, they inquired about the health of his second wife and new baby and about the price of corn in the market. I just about had regained their attention when a young man herding thirty cows down the road lost control of his cattle. The herd veered off toward the village cotton field. Most of my students jumped up to divert the cows from their precious cash crop.

These sorts of interruptions tended to throw me off my patter. However, in the end, I suspect they learned something. After all, they had a teacher who very much enjoyed his work.

By the way, the difference between marketing and sales: Marketing is having what you can get rid of. Sales is getting rid of what you have.

After I finished my work, I could not leave Mali without viewing several of its most interesting sights:

• Djenne – with the largest mud building in the world, a six story mosque
• Timbuktu – at the end of the world, the legendary caravan town on the southern edge of the Sahara
• Mopti – the country’s major river port in the heart of the Niger River inland delta
• Dogon Country– Mali’s famous trekking destination and an area of incredibly rich culture

Let me tell you about my experience in the latter two locations.

Mopti lies at the confluence of the Bani and Niger Rivers. I hired a boat captain to take me through the waterways at this river junction in the inland delta. My captain – – a highly inflated title for someone who commanded no sailors, just a 25 foot long pinasse (canoe), a pole, an oar, and I guess, me as well – – spoke little French. I too know only a little. His little and my little didn’t correspond. Consequently, I was pretty much sailing blind, going wherever he poled and paddled me.

When we arrived in Kuakolodaga there was blood in the streets. Also blood in the dirt courtyards, in the dirt alleyways, pretty much all over. At the risk of sounding bloodthirsty, it was quite colorful: red on tan. By the time we got to this island, the sheep had been slaughtered. All over predominantly Muslim Mali, every family that can afford a sheep – – almost all – – purchase and slaughter one on the important Muslim feast day, Tabaski, the celebration of Abraham’s willingness to sacrifice his own son. If you want to get a relaxed view of Islam untainted by the media, by al Qaeda, by the Taliban, by radical Pakistani madrassas, then come to Mali. Some 90% of the population are Muslim. And most live a rather chill version of Islam. Veils are essentially unknown. In some villages the women go topless. (Try doing that in Saudi Arabia.)

On this special feast day the villagers were dressed in their finest: especially bright clothes, women with perfectly corn-rowed hair, a sort of yellowish mud makeup on the face. Even some with plucked and redrawn eyebrows. From that alone I could have been at a Manhattan charity event – – except for the blood in the streets.

By the time we poled downriver to the next village, Masaya, there the sheep had been quartered and were slow cooking over a low wood fire in a mud brick oven. I sat down to talk with some young men in an extended family. After a few minutes one of the guys stepped away, then shortly reappeared with several unrequested pieces of mutton on a bed of rice covered with green slime. Okra and baobab pods I think, but I can’t be sure. The rice was likely boiled in muddy Niger River water with the requisite dash of sand. I wasn’t keen on dining just then, especially this meal, but they were so hospitable to share their Muslim feast day mutton, that I felt obligated. The score: somewhat tasty, but highly chewy.

On to Dogon Country: The Dogon are an ethnic group of half a million, living in 700 villages scattered along a 150 mile long escarpment. Some villages perch on the plateau atop the escarpment, others lie on the plain at the base of the cliff. And in between are a series of abandoned cliff dwellings strewn along the length of the escarpment, sort of like a never ending Mesa Verde.

We trekked for four days and three nights through Dogon Country, about nine miles each day – – a healthy but not an inordinate distance to hike. However this was no cakewalk either. We both ascended and descended the 1600 foot high escarpment each day. So, many hours of our daily hike were essentially on nature’s stairmaster.

My guide, Batrou, spoke English fractured enough to be quaint, but clear enough to be occasionally understood. We were climbing up the 1600 foot high escarpment to a village that promised to have chicken and rice for lunch. (All villages promise to have chicken and rice for lunch.) Batrou was about 10 yards ahead when he suddenly wheeled around and sprang back towards me, closing the gap between us in about 3 milliseconds. His eyes were saucers; he said in perfectly clear English, ¨Big cobra.¨ I didn’t get to see the snake, it had slithered off into the bushes before I had the opportunity to talk it down from its agitated state. The last half of our ascent, post-cobra, was not as relaxing as the pre-cobra first half had been.

Maybe Dogon Country is the end of the world. I spent my first night in the aptly named village of Ende, in rather rustic conditions: I slept on the roof of my lodging – – too hot inside – – under a mosquito net and under the stars. I lost count in the high trillions. Neither Ende, nor the rest of the dozen villages I visited, had electricity or running water. I showered with a bucket and ladle. But what the Dogon country lacked in infrastructure, it more than made up in richness of culture.

The elderly Dogon lady sat us down in the shade of an alleyway and from a leather pouch she emptied out 20 small seashells onto a woven grass placemat. Next she scooped up the shells in her hand, brought them to her mouth, blew on them, talked to them, then tossed them back down onto the placemat. I have seen guys at the craps table in Vegas behave similarly.

She repeated this process several times until the shells landed in an auspicious configuration: perfectly side by side or one on top of another or one hanging off the edge of the mat. For each auspicious configuration she told Batrou the meaning and the ramification on his search for lost money. For twenty minutes she kept up this shell tossing, shell blowing, shell talking, and shell interpretation. This woman, like all Dogon soothsayers, was untrained. She had learned her trade, Batrou said, “From the spirits.”

Apparently so pleased with her advice to him (“you must sacrifice to recover your lost money”), Batrou asked her to evaluate my future. Good news: She said I – – and my family – – would have good luck. Consequently, any of you wishing to join my family, kindly email me. And also wire $100 to my bank account. She said I would have good fortune, too.

Before we left she gave me a good luck potion to rub on my face three times a day. The bottle she found for me to carry it in was previously filled with what looked like greenish curdled cream. She sort of washed it out. Not entirely certain that I wanted an unknown potion mixed with curdled cream on my face, I discarded the bottle when no Dogon were looking. I still feel guilty about this.

I will be leaving Mali tomorrow. Shortly after my arrival home I will post a final report in pictures on Flickr. Standby. And standby for a post from my next assignment: whenever and wherever that may be, but certainly from the edge.

3 thoughts on “Blood in the Streets”