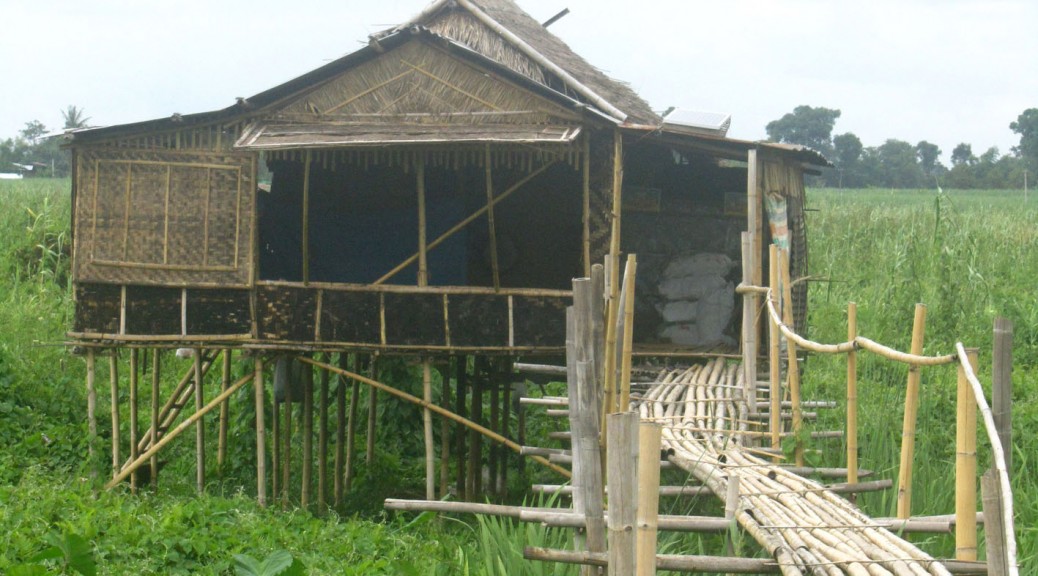 Over the past six years I have conducted thirty volunteer business assignments in nearly as many countries.  None of the one score and some previous assignments quite prepared me for Myanmar.  The former Burma is as different as any place I have ever visited, and as fascinating.  About the only thing similar to previous assignments was the work assignment itself.

My work: Assist two different cooperatives, one of farmers and one of fishermen. My mission was to improve the effectiveness of their organizations.  I taught both groups, about 30 participants each, three days of related topics: business, leadership, and organization.  My curriculum consisted of some lecture (including the story of the tortoise and the hare – – slow and steady wins the race), some full audience participation, and some small group exercises.  One of their favorites was a brainstorming session to come up with as many new product ideas as possible within five minutes.  Next each group selected their favorite new idea and created a brand name, pricing, slogan, and a 10 second product pitch.  If any of you needs some ground sesame, I can connect you with a team of farmers that has a creative product pitch to give you.  Likewise for fish paste.

I was impressed with the range of activities offered by the co-ops.  Most farmers’ coops provide help to farmers focusing on agricultural assistance.  However, the Burmese coops offered a range of social services well beyond agricultural assistance.  One co-op found seasonal construction jobs for the farmers after the harvest was in, thereby providing extra income to the poor farmers.  In a similar vein, another co-op purchased rope making materials so the farmers could make money by hand crafting and selling rope.  Yet another arranged for community assistance to the elderly in their farming village.  All laudable activities.

The dress in Myanmar is a bit different than in the western world.  Men wear a LONGYI, an ankle length skirt-like affair.  Picture a very wide bag, open at both the top and bottom. One steps into it, takes the wide sides, and folds the sides in front, tying with a knot. This knot is every bit an art form as a man’s Windsor knot in the west.  Every man in my training class wore a longyi; and every woman, an ankle length wrap around skirt.  I wore the pants in class – – the only person who wore pants in class.

Women, especially rural women, but even many of my business colleagues in the capital, wear THANAKHA paste on their face.  This is a yellow-hued paste made from the powdered bark and wood of the thanakha citrus tree.  Thanakha protects from the harsh tropical sun and nourishes the skin. The Burmese women do have quite beautiful smooth skin when the paste has been removed.  Only thing is, many women wear a thick layer of paste out in public all day long.  Sort of a yellow tinted coating of Clearasil or perhaps an exceptionally thick application of (yellow) rouge all over the checks.

My first night I ate at a restaurant in the capital, Yangon.  Apparently a Caucasian face was a novelty in this restaurant.  There was a polite intramural scramble to see who got to seat me and take my order.  Several wait-staff got in on the act: bringing food, changing table ware, rearranging items, standing by to help.  At one point five of them were lined up in a row just an arm’s length from my table watching me eat.  I now know how Lady Gaga feels when passing through a crowd of teenage fans.

Between my work stints with the two cooperatives I visited Bagan, Myanmar’s historical Buddhist jewel.  For two hundred years, starting in the 11th century, the devout Buddhists built 4000 pagodas on a flat plain alongside the Irrawaddy River. As far as the eye can see, one views red, white, and golden pagodas crowded together on this plain.  And all have names.

A quite new name is the memorable, “Nuclear Catastrophe Overcome Pagoda.”  If the deal with Iran doesn’t eventually work out, I may convert to Buddhism and request this pagoda as my duty station.  Nearby was an equally unforgettable name, “Be Kind to Animals the Moon Restaurant.”  You have probably already deduced that they specialize in lunar vegan fusion.

In Magwe, one of my training sites, there was a perpetual haze from the hot dusty weather supplemented by the burning of field stubble following this, the harvest season. I hate to think what a lifetime of post-harvest breathing would do to one’s lungs.  But the upside is daily blood red spectacular sunrises and sunsets.  And speaking of blood red….

Betel, the nut from the areca palm, is a stimulant.  It is commonly chewed by rural men as a pick-me-up and as a social lubricant. In the horn of Africa one chooses qat, it’s kola nut in West Africa, coca leaves in the Andean highlands, and caffeine in the developed world.  Every culture has its mild stimulant of choice.  But betel is not so mild: six time the impact of a cup of coffee, with damaging physical effects.  It permanently stains the teeth and gums red.  Most of the betel chewers display obvious tooth decay.  (It is not clear to me whether betel is the cause or if betel chewers just don’t get dental care.)  The people are so friendly, so there is always a big smile – – with red on the gums and teeth, at least on the teeth that are still there. And then there is the blood red spit. Yucky. But fascinating.

4 thoughts on “Myanmar: A World of Difference”