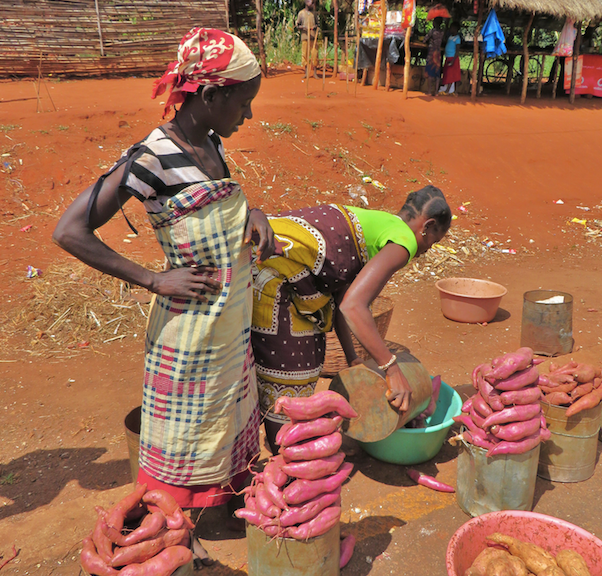 Early in the morning is when I like to take my occasional jog. Here in Chimoio the air is cooler…but, not necessarily fresher. Before 7 AM moms have fired up charcoal stoves to prepare breakfast for their families. Vendors are sweeping the dirty streets and sidewalks in front of their shops, stirring dust back into the air. Delivery trucks and swarms of minibuses have begun their daily runs, contributing diesel fumes to the dust and charcoal compote. Running is healthy; just don’t breathe here while you do it.

Chimoio is the capital of Manica province in western Mozambique – – itself lying in southeast Africa along the Indian Ocean. I have worked in this former Portuguese colony twice before, each time in or near Chimoio. I like it here, so when offered another assignment by CNFA, one of my NGO partners, I gladly accepted.

My client this time, Zebra Farms, grows soybeans and sweet potatoes on a 30 acre farm – – quite large by local standards. The owner, Lucas Mjuju, sells the crops to his own vertically integrated food production company. The production company intends to process the soybeans into soy milk and onward into drinkable soy yogurt. This is a rare beverage in Mozambique. They also plan to press the sweet potatoes to create sweet potato juice. This is unusual and unknown here…perhaps unknown anywhere. We’ll see how that goes.

My task: Help Lucas develop a business plan that will allow him to secure funding for irrigation equipment. With this equipment he can expand his growing fields and improve the quality of his crop. If Lucas is successful in securing funding – – and more challengingly, successful in making a go of selling drinkable soy yogurt and sweet potato juice – – not only will he and his family benefit, but so will the suppliers of inputs to his farm, as will nearby farmers who will have an outlet for their soybeans and sweet potatoes. And consumers will have additional healthy beverage choices. A lot of parties stand to gain if we get it right.

Besides the proposed beverages Lucas plans to make snack crackers from the pressed soy and sweet potato residue. So consumers could as well benefit from a high protein, high fiber, low fat snack choice. I sampled one: still needs some tweaking to the recipe. However the yogurt drink was perfectly fine. And now I am waiting to test the sweet potato juice. I did see cartons of maize (corn) drink on sale in Chimoio’s largest supermarket. So, curious plant-based beverages are not unprecedented here.

I met my client briefly the evening I arrived in Chimoio. He left town the next morning for unannounced meetings over the following five days. My laptop went on the blink so I took it in for a tune up. The local computer repair shop said they would have it “going good” within two hours. Four days later I was still waiting for the good going. Then, Francisco, my Portuguese and Shona interpreter contracted malaria. So there have been a few glitches in the initiation of my assignment. But they have a saying here: TIA. “This is Africa”. We roll with the punches. And I love the work here. However, it is difficult to make progress without access to the company owner, a laptop, and an interpreter.

Francisco has been my (talented) interpreter twice previously on assignments in Mozambique. And he has contracted malaria several times before. The strain of malaria here is illness inducing, a temporary misery, and an inconvenience, but is not lethal. So, while I am concerned about Francisco, I am not worried that he is facing a serious health threat. Without him however, I am facing a serious translation threat.

In poor countries the informal economy is a way for people with no other source of income to survive. The informal economy is widespread here in poor Chimoio. Vendors lay products out on the sidewalk – – directly on the dusty sidewalk. On offer: previously worn trousers, shirts, shoes, oranges, peanuts. For clarification, the oranges and peanuts have not been previously worn. Sometimes so dense are the displays that pedestrians must walk single file along an entire city block just to pass through the informal vendors.

Then there are the hordes of young girls with babies. It is difficult to determine if I am looking at a big-sis babysitter or a too-young-mother. In either case continuing with education is a challenge. And without education one’s career arc ends on the sidewalk in the informal economy. My hotel chambermaid told me she had her first baby at 18…at least after her schooling was completed. Hence she secured a regular, albeit low paying, job.

But enough about the informal economy, now I must get back to the task at hand: rounding up my client, collecting my computer, and wishing Francisco a speedy recovery. And by the way, let me know if I can bring you a glass of freshly pressed sweet potato juice.