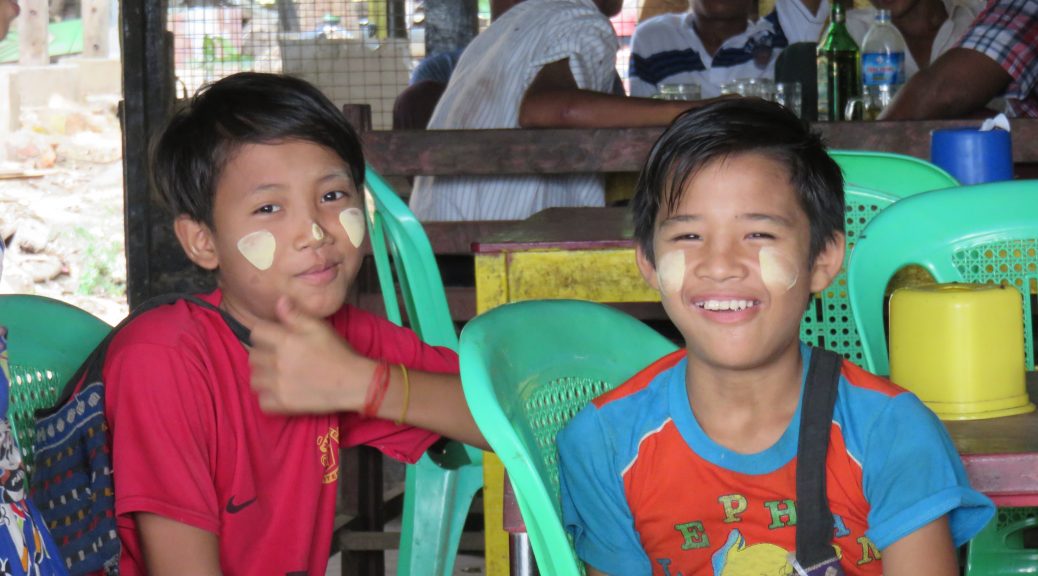 Back in Myanmar for my fourth volunteer visit I figure it is time to tell you about which side of the road they drive on here: the right side – – just like in America.  Pretty mundane?  Not really, because the steering wheel is on the right side of the car.  This means that the driver is seated curbside as he drives.  In every other country in the world the motorist will be seated next to the center median allowing him vision of the road ahead. Sitting curbside does not allow such an essential perspective. Burma (as it was then named) was once a British colony (1824 -1948) and the Brits naturally introduced their driving system: drive on the left using a right handed steering wheel.

In 1970 the military dictator of Burma, General Ne Win, wanted to make a clean break from all things British.  He consulted his soothsayer.  The fortune teller advised Ne Win to switch the drive side of the road…but not the steering wheel configuration. So, now the driver is seated at the far right hand edge, the curbside of road.  When he attempts to pass a slower vehicle, he must pull out completely into oncoming traffic before he can determine if the road is clear to pass.

If not clear, in this country of narrow roads and heavy traffic, he must very quickly duck back into his correct lane…and sit along the curb again. It appears that General Ne Win knew more about military matters that about highway planning.

Now, as a passenger, I am seated next to the central median, and I am the first person exposed to a head-on collision as the driver attempts his essentially blind passing maneuver. I thought about wearing a bicycle helmet while in the passenger seat, but rejected that idea because I would rather risk a head-on than mess up my hair.  Instead I usually elect to close my eyes and sleep under the theory that if I don’t see bad things coming they won’t happen.

The challenge with sleeping in a car on the Myanmar road system is that all drivers toot the horn when starting their unseeing passing attempt.  And they honk a thank you to the vehicle once they have passed it.  They toot a heads-up-I-am-here to pedestrians, bicyclists, and motorcycles – – especially to the motorcycles carrying a family of four.  All the other vehicles on the road are, as well, beeping out a cacophony of warnings and thanks.  Consequently, I am at elevated risk for a head-on and I can’t get to sleep.

I survived the unique highway system and arrived at my work site, Ayadaw, in central Myanmar where I assisted the Ayadaw Township Thanakha Association (ATTA).  Ayadaw has the ideal climate for growing thanakha. This is a species of citrus tree found only in Myanmar.  The powdered bark of the tree is used as a uniquely Myanmar cosmetic and skin restorer.  An estimated 90% of Myanmar women and 30% of men apply thanakha to their cheeks as a beauty aid.

The farmers in the association plant a thanakha tree farm, wait five years for the trees to grow a three-inch diameter trunk, just the right size to harvest, and then sell in six inch lengths to the consumer.  We don’t grow thanakha trees in the US, but perhaps you could envision Christmas tree farming: plant, grow for a few years, harvest, sell to consumers.  Pretty much the same for thanakha farming.

Thanakha is deeply entwined in Myanmar culture, there are 1000-year-old references to its benefits in the country’s literature.  My interpreter told me his grandmother applied the cream to his face daily when he was a kid; then she had him open his mouth for a dab on the tongue as a general health tonic.  He said it tasted terrible.  He has very nice skin today and he was seldom sick as a child.

All families have a grindstone the size of a large dinner plate.  They purchase a six inch length of tree trunk, place some water on the grindstone, and grind the bark into a yellow creamy paste.  Then they apply it to at least their cheeks, but often to their entire face. It is quite thick and most noticeable, almost as pronounced as face painting.  It is common to see women, especially in rural areas, wearing the yellow paste throughout the day.  One lady told me she applied it every day except on her wedding day when she went thanakha-free.

Following are unedited passages from the ATTA marketing brochure:

You may note that marketing communication, at least in English, is not yet their forte. You may also note that they claim more benefits than one could rationally believe.

They even hope to market the seeds as a holistic medicine to cure heart problems.  I suggested they stay away from this application until they had third party research that showed it to be safe and effective.  Personally, I figure it is safe and ineffective – – but I have not seen third party research to support my belief either.

Despite the over-hyped benefits of the product, there is little doubt that when pulverized on a grindstone with a bit of water, it produces a cream that is cool and soothing to the skin, probably repels mosquitoes, and clears the complexion.  So, all in all, a fairly beneficial product…heart claims not withstanding.

I helped ATTA improve their management techniques and provided business training.  They quite enjoyed the lesson on negotiating and the advantage of not just listening to the other party’s words, but also reading his body language.  Arms folded across the chest and leaning away likely means the other party is not interested in your thanakha offer.

But the good news here is two-fold: they are learning a new negotiating skill and they sure do have beautiful skin.