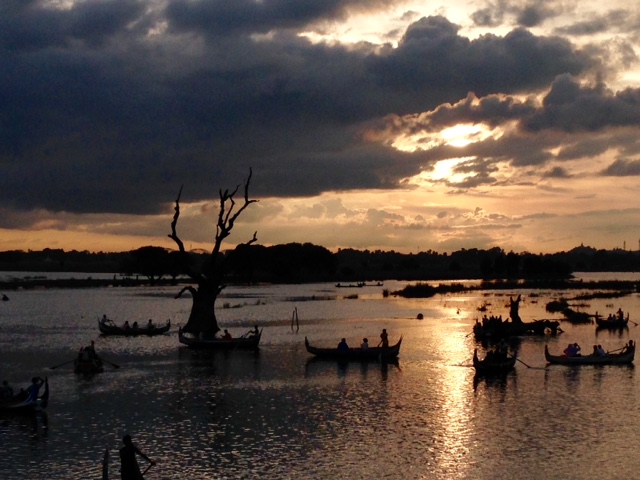 I am wrapping up five weeks in southeast Asia.  The bulk of that time I spent in Myanmar (Burma) where I conducted back to back assignments. The first was to give a series of marketing lessons to poultry farmers in Mandalay.  Some of you may know of this city by virtue of Rudyard Kipling’s famous poem, “The Road to Mandalay.”

By the old Moulmein Pagoda, lookin’ eastward to the sea,

There’s a Burma girl a-settin’, and I know she thinks o’ me;

For the wind is in the palm-trees, and the temple-bells they say:

Worth noting is that Kipling never visited Mandalay. The first stanza is the give-away. Mandalay is inland, 400 hundred miles from the sea.

Now back to the marketing lessons:  As is customary on the road to Mandalay, one removes his shoes when entering the classroom.  For the first time in my life I taught class barefoot. The feeling is one of great freedom and is quite a necessity in an unairconditioned classroom in 90 degree heat and 90% humidity.

After the chicken farmers I moved on to Nyaung Shwe which means Banyan Tree of Gold.  There is a village a few miles away named Shwe Nyaung (Golden Banyan Tree.) Nyaung Shwe, Shwe Nyaung: this is all very confusing – – unless you are dyslexic, then I assume it is quite helpful. Easier to grasp are many of the Burmese names.  They are two-part and repetitive.  Some of the people I worked with were Myint Myint, Hnin Hnin, Htut Htut, Su Su, Moe Moe, and Aung Aung.  I am not making this up.  Now the beauty of such a system is that if you forget one of the name parts all you need to do is recall the other part, then double it.

In March, I had conducted market research around Nyaung Shwe on the demand for handcrafted natural soap.  We concluded that there was indeed high demand among the tourist hotels, spas, and souvenir shops in that town. Consequently, my NGO (Winrock International) sent two craft soap makers here to train women’s self help groups in eight nearby villages.  After the soapmaking lessons they decided that I should return to provide lessons on how to market their new product.

Special note for my female readers: Soap is little more than oil, water, and lye, for hardening.  One can add fragrances and scented herbs as the soapmakers of Nyaung Shwe do.  While I was teaching marketing, parallel training on lotion making was taking place.  Lotion is similar to soap but eliminates the lye hardening agent and adds a thickening ingredient such as bee’s wax to yield a creamy consistency.  I attended several of the lotion making sessions and as a result my hands are now baby soft.

Special note for my male readers: Next blog post I will discuss power tools and NFL player trades.

After my work in Myanmar I chose to visit Hanoi, Vietnam.  Hanoi is a beautiful blend of Asian and French Colonial styles.  Sidewalk cafes abound.  I even found one selling coffee for $12 a (tiny) cup.  I suspect this price exceeds even Starbucks’ Salted Caramel Mocha latte double venti superioso.  Now I am a pretty cheap guy, but out of curiosity I decided to try the $12 cup.  It was not just any coffee, it was Civet Coffee.  The civet cat, native to tropical Asia, apparently eats coffee beans.  The beans pass through its alimentary tract undigested but altered in some way by the civet’s stomach acids.  So, picture this: the coffee grower feeds coffee beans to a civet, collects them at the other end, washes them very, VERY well, roasts the bean, brews a cup of coffee, and serves it to tourists with more money than sense.

I do not have a refined palate.  I could not taste the difference between a normal cup and the civet cup.  I imagined I was drinking a basic cup of coffee. But my wallet told me otherwise.  At least I did not select the Wild Civet Coffee option at $46 per cup.  Really.

To get to the civet coffee cafe, I took an Uber.  In Hanoi, with nearly four million motorbikes, my Uber that day was an Uber-moto.  Very inexpensive and quite agile at avoiding traffic jams; there were some scary moments however.  My driver began the journey consulting his iPhone map.  One handed motorcycle driving with eyes on a tiny screen is not a safe practice.  At least he gave me a helmet to wear.

He weaved through the traffic like a broken field runner on the gridiron.  I even imagined I was reliving my glory days as second string quarterback on my freshman high school football team.  If only I had gotten into a game.

We zigged and zagged and shucked and jived and passed a bus on the curb side and nearly got run out of bounds by the bus. While he was executing his zig zag driving the other four million moto drivers on the road were doing the same.

Imagine four million second string QBs all running for their moment of glory that day.

5 thoughts on “Civet Cats and Coffee”