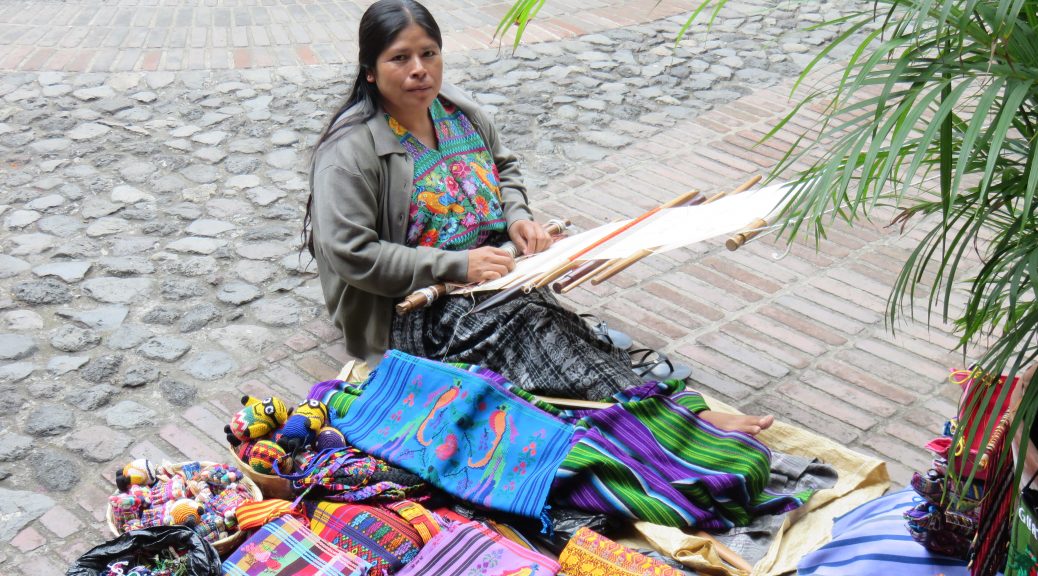 This time we start with a quiz.  Which fruit is consumed in the greatest quantity worldwide?  I guarantee the answer will surprise you.  Do not skip ahead or I will block you from receiving this blog.

Guatemala has 1.5 million artisans in a country of 15 million people. That’s one of every ten citizens who makes a living or contributes to their family via their hands and their artistic creativity.  Just walk through any market and tightly woven bright fabric, colorful needlework, artistic clay pots, striking wood carvings, and gold, silver, and jade jewelry will grab your eye.  I was particularly interested in such craftsmanship because my latest assignment, just now wrapping up, deals with budding artistic talent.

The artisans reside mostly in the countryside.  In the country’s capital, Guatemala City, few young children learn much about their country’s artistic heritage.  My client, DIDART, teaches children, ages 4 – 16, about the country’s craftsmanship.  DIDART does this by running school-based workshops for the students.  The youngsters are taught how to make crafts: for example, clay pots for the youngest and least dexterous fingers, painted gourds for the 8 – 10 year olds, and wooden earrings for the older, more sophisticated students.  My task was to make as many clay pots as possible during my three week assignment.

Actually my task was to help DIDART come up with a growth plan to reach as many schools and students as possible.  And also to draw in socially minded businesses willing to contribute to the cost of delivering the workshops to public schools in poor parts of the city – – schools that otherwise could not afford to pay the cost of materials and trainers to present the workshops.

In order for me to better understand the DIDART process I went on a day trip, a 90 minute twisting ride north of the capital to Chinautla to meet clay artisans.  As mentioned above, this is a great program for young kids, because fine motor skills are not essential for clay forming. In this particular town pottery dominates, there were a dozen or so pottery makers presenting their crafts on display shelves in front of their shops.

Two young women, 19 and 20, from this village later came to my client’s house in the capital to demonstrate how they run a crafts workshop for children.  They coached me through the construction, not of clay pottery because my fine motor skills were of a slightly higher caliber, but instead of a PULSERA de PINO – – a bracelet made of pine needles.  I was shown to form the pine needles in a circle, then wrap colorful string round and round the needles. Initially it seemed that my dexterity indeed matched that of a six year old, but I eventually caught on and now have a fine PULSERA de PINO to show for it.  Stop by my house sometime and I will take it out of the safe and show it to you.

As a thank you to my clients and to the young ladies giving me the pulsera lesson I prepared my signature dish: Enchiladas Maravillosas Hechas por Guillermo.  Look it up in Google translate if you can’t figure it out.

El Fuego was easily visible from my hotel room.  This live volcano was constantly smoking.  We even received an ash warning one day, my first, but the impact was miles away and didn’t affect us in the capital.  Sort of like a bogus winter storm warning in Boston.  Later, in the charming colonial capital, Antigua, we saw El Fuego erupt and spew fire into the sky and roll glowing lava down its slopes.  But again far enough away that the sight was a visual treat and not a personal threat…unless perhaps one had been climbing the volcano.

My good friend, Gregg Johnson, arrived at the end of my work period to join me in a bit of exploring the Guatemalan countryside.  This included a climb of Santa Maria volcano outside of Quetzaltenango, Guatemala’s second city.  We ascended about 1,500 feet (halfway up) then hiked 1.5 hours horizontally around the cone to a vantage point looking down on Santiaguito, a live volcano.  As luck would have it, Santiaguito was smoking when we arrived and honored us with an eruption of more smoke, ash, and rumblings just 15 minutes later.  Also, as luck would have it, the wind carried the ash and volcanic gasses in the direction opposite from our viewing point.  Consequently, you are now reading this blog instead of my obituary.

Another highlight of our exploration was a tour of a “finca de café” or coffee plantation to you gringos.  Coffee growing and processing is a labor intensive exercise.  Entire families participate in the harvest of the coffee bean.  The country’s school vacation has been set (December and January) to coincide with the harvest so that children can join their parents in the field.  A family can collectively pick enough coffee – – and get paid by weight – – to earn $10-15 per day.  This may not seem like a great wage, but in a poor country like Guatemala it is well above the extreme poverty cutoff of $1.90 per day. However, the $10-15 is only good for a few months during the harvest, then the kids go back to school and the parents must find other sources of income. Maybe handicrafts??

So now it’s time to reveal the most consumed fruit in the world.  It is not soursop, golden kiwis, cloudberries, Chinese gooseberries, or even pomegranates, although I suspect any of the preceding would have surprised you.  Nor is it apples or oranges.  Neither olives nor tomatoes, which botanically speaking are fruits, but we think of them as vegetables, not fruits.

When that poor Guatemalan family in the plantation picks the coffee berry they are picking the most consumed fruit in the world.  We just happen to drink the roasted seed not the surrounding fruit.  I think you can make money in the bar with this bit of trivia.  Or get beat up.

13 thoughts on “Lots of Fruit”