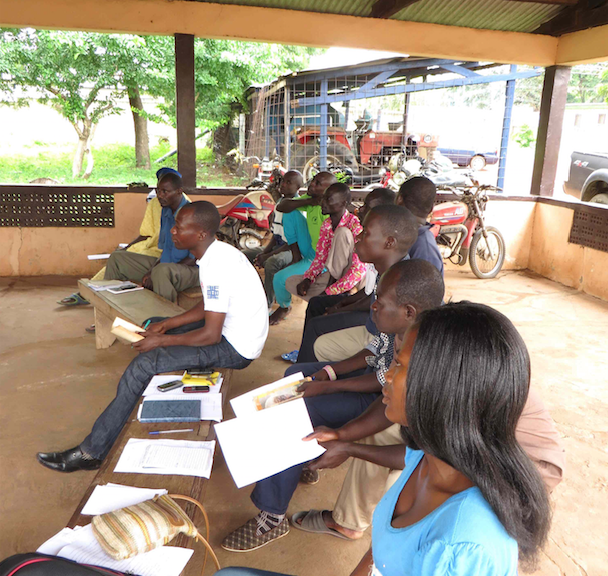 Just before training began a clearly nursing mother with three little kids in tow walked into the classroom.  My NGO colleagues chased the goats out by throwing rocks at them.  Later I caught another goat eating a book.  And then training began.

Our classroom was an open sided carport that we shared with two very dirty non-operational motorcycles.  I taught the executive team of Yemyoliya Farmers’ Cooperative three topics: management, leadership, and marketing.  Yemyoliya means spreading knowledge and that is what I was trying to do.

I taught in English to 15 senior executives of the co-op. Many of them understood much of what I said. But of course the goal was for all of them to understand all of what I said.  To get closer to that goal, Mahama Alhassan, my co-op counterpart, translated into Dagbani, the local tongue and one of the 56 languages spoken in Ghana.  Just so you know, the G in Dagbani is silent but serves to make the subsequent B “plosive.”  Whatever that means.  Linguists please weigh in here.

This was my third trip to Ghana, each time has been to a different region and thus a different language.  This time to Tamale (Ta-ma-LAY), the capital of Ghana’s Northern Region.  Not to brag, but I am pretty much fluent in all three languages I have encountered here – – at least as far as good morning, please, and thank you are concerned.  Except for the first two languages which I have long since forgotten.

In order to learn and remember I suggested to my class that they take notes.  But not everyone took notes and I thought this was a bad sign, of say, indifference to learning or antipathy toward the instructor.  But later, on the daily sign in sheet, I noticed that several had signed in using a thumbprint not a signature.  They were illiterate and note taking was not in their repertoire of skills.

I offered one lesson bloc on problem solving.  (First ensure that the stated problem is the real problem.  For example, it would be foolish to try to solve lack of note taking when the real problem was illiteracy.)  At the end of this bloc many in the audience asked me to solve their problems.  I generally was able to turn the queries back to the assembled class for them to resolve.  Examples:

I never walked in the street.  Tamale has a population approaching one million and its traffic is Africanesque, which is to say, the traffic is thick and fast and pedestrians have no rights. But I am not sure I was any safer on the sidewalk. Bicycles and motorcycles often chose the sidewalk because they too feared the cars. Anyway I never got hit – – which was a good thing because the doctors were on strike the entire time I was in Ghana.  Hospital emergency rooms were shuttered.

At the completion of my assignment I decided to visit a neighboring country. The bus to Cotonou, the commercial capital of the small West African country of Benin, took twelve hours.  Just as the bus started to move an itinerant preacher stood up in the aisle and, with a bus company supplied microphone, began to deliver a Christian sermon.  I am uncertain how the non-Christians on the bus – – and there were plenty of Muslims and a few Hindus on board – – felt about this. But such spontaneous sermonizing is relatively commonplace in Ghana.

Imagine in the US if someone took an over-amped mike on the Greyhound and spent the first twenty five minutes of the journey delivering a sermon to a truly captive audience?  But apparently many appreciated this unexpected Saturday morning sermon. “Hallelujahs” punctuated his presentation and I observed many willing contributions to the passed collection envelope. I doubt many knew which church he represented (if any) and who might benefit from their tithe (other than perhaps the preacher himself.)

My fellow travelers and I were also a captive audience for the blaring television which hung from the bus ceiling. We had several hours of Nigerian soap operas forced upon us, then over the last four hours of our journey we were entertained by a World Wrestling Federation Smackdown marathon.  Over four nonstop hours I witnessed every hold and throw known to the WWF: full nelson, airplane spin, double knee facebreaker, gorilla press gut buster, pump handle fallaway slam, dragon screw legwhip, chickenwing over the shoulder crossface, rope hung figure-four armlock.  I am not making this up.

There were body slam flips off the top rope.  Folding chairs were smashed into backs and heads.    Men fought men, wrestlers fought spectators, spectators fought referees, women fought women, and women even fought men. And thanks to four straight hours, I will never need to watch Smackdown again.

In retrospect the forced sermon wasn’t so bad.  It was shorter and a lot less violent.