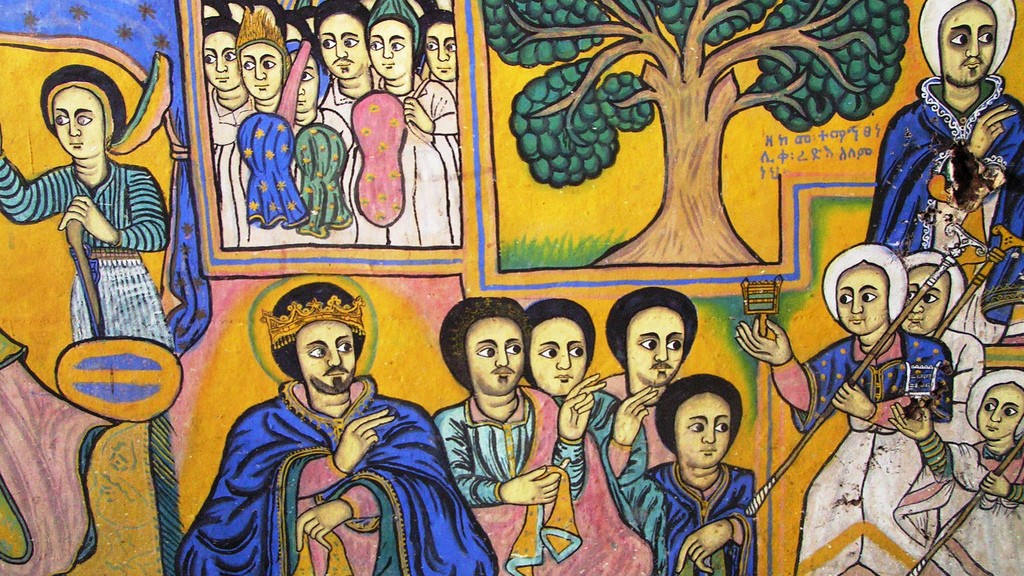 Worku and I went to Chale (Cha-lay), due east from Addis, on Friday to check on the health and welfare of Solar Energy Foundation’s six person installation team who live in that remote (off the grid) village.

As usual we got an early start, 6 AM, so that we could battle the early morning truckers and their eye stinging, lung searing, unfiltered exhaust. I hate to think what a lifetime breathing this polluted air will do to one’s health. In my case, it merely felt as if I had smoked a pack of cigarettes.

However, when we stopped for breakfast 1.5 hours later in Mojo, I had found my mojo. The traffic had thinned, the air was fresher. We turned off the paved highway and continued on a dirt road, sometimes smooth (40 mph) and sometimes very rough (15 mph.)

The donkey to car ratio increased, as did the horse cart to car ratio. Collective this is referred to as the beast of burden ratio. After a couple of hours we arrived at the edge of a deep valley. As we made our way down the 1000 foot escarpment into Africa’s Great Rift Valley, the air grew hotter and dryer. On the valley floor camels joined the parade. Most were laden down with wood, bags of grain, or large plastic containers of water. More about water later.

Yet anther 1.5 hours brought us to Chale, a small village where SEF has installed solar systems on 55 homes in the past month. They have several dozen additional orders to fulfill in the coming weeks.

The final 10 miles to Chale was on what could at best be called a beaten path. Save our own 4×4, we saw no other vehicles on this stretch. We played dodge ‘em with the local pedestrians, donkeys, camels, heard of goats and cows.

We stopped to talk to one friendly villager. Friendly, except he did have a rifle slung over his shoulder. It appeared to be a near-antique – – a single shot, bolt action piece. However, I assumed it worked, so I was especially charming towards this guy. I dispensed with my usual line of Emperor Haile Selassie jokes.

When we got to the living quarters of the SEF installation team, I was shocked: no electricity (but of course that is why they are in Chale), no running water, and all six installers (4 male, 2 female) live in a single room. About 12 x 10 feet with mattresses covering virtually every square foot of the floor space. The room had a door, but no windows.

I gently inquired about the adequacy of their living arrangement. They were universally upbeat, joking about dorm life. It turns out that all come from rural backgrounds and large families. They seemed to be one happy family now.

They cook outside on the dirt yard in front of their home.. They take bucket showers and there is an outhouse somewhere nearby.20 They rent their McMansion for $4 per month. Ah, the joys of country living.

But there was a problem, a big problem. This being the dry season, the nearest source of potable water was a 15 mile roundtrip to the closest market town. And they have no vehicle.

So, today we drove them and their large collection of five gallon plastic containers to town. There they guided us to the local water merchant: some guy who has a well, a pump, and a hose. It took a full hour to fill their containers. We then manhandled the now heavy containers back into our vehicle and retraced our route to their charming villa, now made even more attractive by the presence of a one week water supply.

Since the installation team cannot count on an SEF vehicle visiting them from Addis regularly, they are seeking other ways to solve their water challenge. They have investigated hiring a donkey or a camel, leading it to town, then walking back with full containers on the back of the animal. Downside: 15 miles roundtrip on foot, plus water filling time, takes the better part of a day. And a single beast of burden, even a large camel, can carry only a couple days of water in containers.

But the resourceful installation team may have come up with a workable solution. Each Saturday morning a truck driver from Areti, the market town, drives his empty truck to Chale to pick up farmers and their produce, and takes them to the Saturday market in Areti. The SEF installation team plans to provide him with a week’s worth of empty containers which he will fill on Saturday morning and bring to Chale in his empty truck. He will return to Areti with the farmers, crops, and another week worth of empties. All that remains to be done is to agree on the payment amount.

Mercifully, the rainy season will begin in another month and then there will be sufficient clean water – – until the dry season returns in mid September.