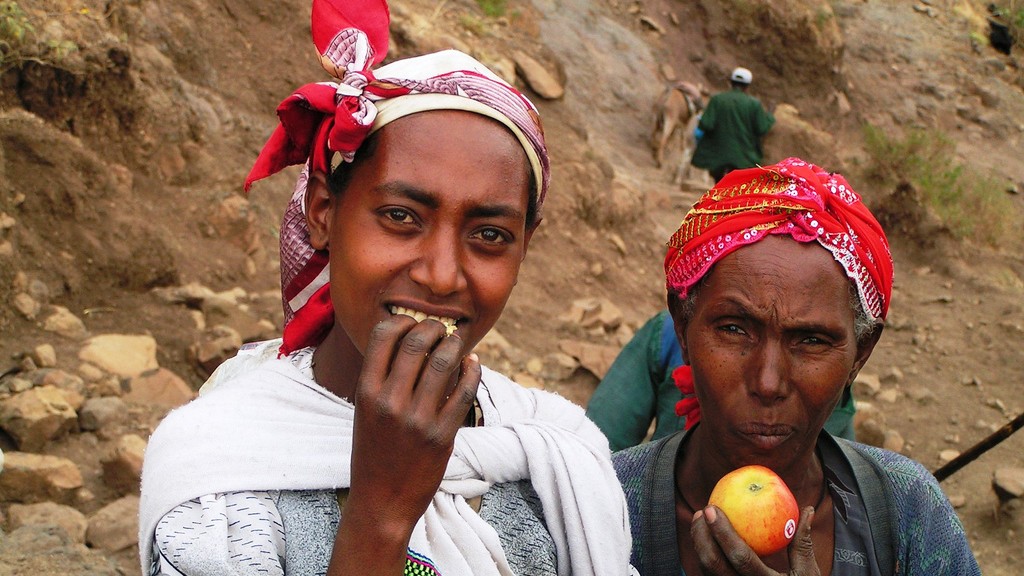 On Saturday, seven of us loaded into two vehicles for the six hour journey north to Rema. We were two Ethiopians, two Swiss, one German, one Brit, and I. All I can say about the long (and dusty) drive of endlessly changing vistas is that it now ranks in my top ten all-time list: Open plains with grazing cattle, sheer volcanic drop-offs, vertiginous mountain switchbacks, flat bottom river valleys, red, white, and tan colored buttes – – studded with eucalyptus trees, human sized prickly pear, and other assorted greenery. All along the way was the usual menagerie of donkeys, mules, horse carts, long horn cattle, and goats, all tended by the local people.

In some countries they would make this a national park. In Ethiopia it is, well, just the countryside.

We arrived at our destination late in the afternoon, just as the Saturday animal market was breaking down. Herders drove their unsold cows and goats down the mountain road out of Rema. From the center of town – – and the daily necessities market – – shoppers from surrounding villages made their way home carrying a week’s worth of produce or grain or cooking oil or kerosene. The outlying villages are off the electrical grid and they do not have solar, thus they are consigned to lighting with expensive and smoky kerosene.

But Rema does have solar. It is the model project for Solar Energy Foundation. Instead of selling the systems to residents here (as they are doing elsewhere in Ethiopia) they have given a solar system to each of the 2,500 households in the town. SEF has established a solar training center in Rema. The center brings aspiring solar technicians from all over Ethiopia to spend six months learning the trade: three months in the classroom and three months installing and maintaining systems in Rema. After six months they return to their home regions to join an SEF installation team there.

SEF tests its new products in Rema and tries out new ideas, like street lights. Not surprisingly, the local people are absolutely thrilled with the benefits that SEF has brought to the town. Apparently they associate any western visitor with the largesse of SEF. Consequently when our group of five foreigners – – three of whom were involved in SEF’s past generosity – – walked down the street we were greeted warmly by nearly everyone. “Salam” (hello) from all; and an outstretched hand from perhaps 25% of the people. I must have shaken hands with 200 people during my walk through the community. (I may go back later and ask for their votes.)

Samson, the Ethiopian director of SEF, took us into several homes to show us the installed solar lighting. Most homes – – typically two rooms in size – – had two or three LED bulbs hanging from the ceiling. The light from one of these bulbs is equivalent to a 20 watt incandescent light bulb – – quite dim when one considers that in our homes a 60 watt bulb is the smallest we generally use. However, quite bright when the townsfolk compare to their recent past: total, absolute darkness at night.

Then there were the kids. They just can’t get enough of foreign visitors. Our group looked like a collective Pied Piper as we walked through town followed by a gaggle of 20 – 50 kids at any given time. The shy kids would run up, touch my white skin and run away giggling. The brave ones, and most were brave, would say “salam” and want to shake hands. Even the little ones with dirty faces, runny noses, and flies around their eyes – – just like on TV. I shook hands with all of them, then washed my own hands with soap and water before dinner.

Rema has another claim to fame: Bill Clinton visited the town last year as part of the Clinton Initiative. He wanted to view Africa’s first solar town. Interestingly, most locals did not know who he was. Some thought he was a wealthy German philanthropist behind SEF. (SEF is a German-based foundation.) Others had no clue. Realize that most adults are illiterate farmers with no formal education and no link to the outside world. Rema is off the grid. Even those who have a few years of schooling have studied basic reading, writing, health care, and agriculture, not geo politics.