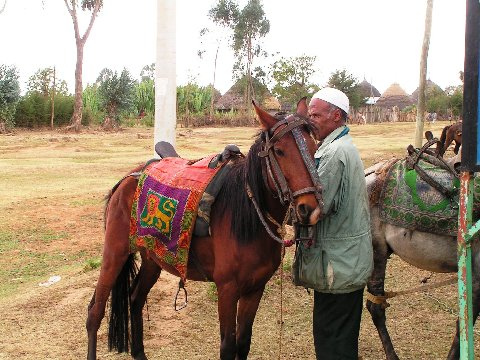 The remaining cardinal direction from Addis that I had not visited was west. So Robin and I planned a day trip to the town of Ambo and nearby waterfalls. Two hours west via bus… but that doesn’t count the taxi ride to the wrong bus station, the city bus ride to the correct station, then the wait on board the correct bus before it left.

Robin and I were the first to take our seats and we chose two in the front row so that we would have an unobstructed view out the front windshield. We knew the bus would not depart until all seats were filled – – they don’t run on a schedule here, they run on capacity maximization. What we didn’t know until we departed nearly two hours later was that it would take nearly two hours to fill the bus. We also didn’t know that the view from our front row seats would be obstructed by several last minute passengers who took the SRO positions in the aisle and bus door stairwell directly between us and the front windshield.

Anyway, the two hour drive to Ambo was fine. But our full journey, counting all our missteps, had consumed five hours, door to door. And when we arrived it was still raining cats and dogs, just like when we started. Along the route the beautiful green fields had rivulets of mud-red water coursing through them.

We had intended to hike from Ambo to a series of scenic waterfalls. However, our later than planned arrival (remember five hours door to door) pretty much precluded this possibility. And besides, who wants to hike through the forest under an umbrella in ankle deep mud? Instead we retired to a local restaurant where, after lunch, we joined an American Peace Corps volunteer and three Ethiopian women for coffee and conversation. The locals roasted raw coffee beans on an open charcoal fire, then crushed them with a mortar and pestle, before brewing the beverage. We sat in a circle on handmade wooden stools for our little kaffee klatch. Not quite as much exercise as a hike to the waterfalls, but a lot less muddy.

In preparation for the Ethiopian New Year, one of the women showed us how to execute the famous Ethiopian shoulder shaking dance – – famous if you have been hanging around Ethiopia for a while. Ask me to demonstrate when I return home.

After our coffee break and shoulder shaking lesson, we boarded a return bus so as to arrive in Addis before dark. A winding Ethiopian highway is no place to be after dark, what with the plentiful pedestrians, donkeys, goats, etc wandering on the road. We had an uneventful, but scenic late afternoon ride back to Addis in a cozy eleven person minibus that was carrying 15 passengers and two very well behaved chickens.

The view from our fifth floor hotel room overlooks a small field that contains a ramshackle corrugated aluminum shack in one corner. The one room shack is inhabited by a mother, father, three children and a grandmother. It is pretty obvious that these are poor people, even by Ethiopian standards. So Robin decided to divert a few of the toys and school materials she had brought for her volunteer teaching job, to our poor neighbors in the field below us.

I accompanied her as she took a collection of stuffed animals, bracelets, pens, paper, and balls to them. The grandmother and kids were at home when we knocked on the metal fence surrounding the field and shack. We interrupted the grandmother who was sitting on a blanket sorting a large pile of barley. She was removing stones from the grain. The kids must have thought Santa had arrived; they seemed thrilled even though none of us could speak the other’s language. Robin even gave the grandmother a bracelet.

Our hotel manager informed us that a week earlier, a Danish couple staying in the hotel, had arrived with a suitcase of children’s clothing since they were adopting an Ethiopian orphan. They too had looked out their hotel room window and then diverted some of their stash to the poor family in the shack. Now I figure that family must be the richest poor family in all of Ethiopia.