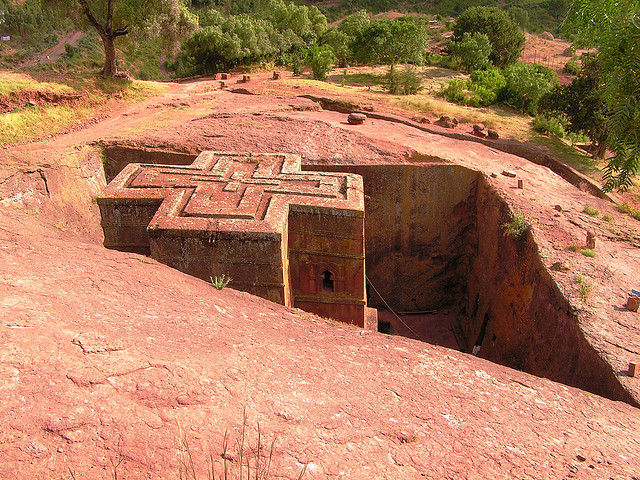 I have just begun my final tour with the Solar Energy Foundation in Ethiopia.

I flew in to Addis Ababa on Monday. Since I am working for a non-profit organization, cheap flights not efficient routing, is the order of the day. Consequently, I departed Boston at 6 AM, heading to Washington, DC where I made my first stop. Six hours later, onboard Ethiopian Airlines, I was high above Boston again, flying (and it looked about the same at noon as it had earlier in the morning) the opposite direction towards Rome and on to Addis. Personally, I think it is crazy to fly the wrong direction to get on a plane flying the right direction, but like I said, efficient routing is not the order of the day.

But all is well that ends well. After 21 hours in transit, I arrived at my hotel in Addis, took a short nap, and then walked to the SEF office. When I arrived, the office was a beehive of activity. Most of our field technicians (solar installers) were there. They had come in from all points on the compass to cake care of home office business before departing for nearly two weeks vacation. And all took the same two weeks: the run up to the Ethiopian New Year on September 11. On that date, by the Ethiopian calendar, 2001 will tip into 2002. And the change will be preceded by – – according to one of my Ethiopian colleagues – – dancing, drinking and eating…raw meat. Not that again. Anyway, raw meat aside, I look forward to their celebration.

I knew I was back in Addis when I encountered a goatherd near my office driving his goats down the city street. He snapped a homemade whip, a two foot long stick topped with a three foot rawhide strip. He also talked on his cell phone. Traditional meets modern in Ethiopia.

My girlfriend, Robin, has joined me for this final three week stint. While I am working she will be teaching English at an Ethiopian school. She has volunteered to work with first through fourth graders there. At the end of our concurrent three week sessions we will travel around the country for two additional weeks.

Ethiopia is nearing the end of its three month rainy season and the countryside showed it. Flying in, I observed the fields: a kaleidoscope of greens… depending on the crops planted in each. Even in the dry season the Ethiopian highlands retain some green, but these colors were striking: pale lime to bright emerald. Also, the rivers and streams were flowing briskly and the ponds and lakes had ballooned in size. Wild flowers were everywhere.

They say this is the best time of year to be in Ethiopia. And it probably is. Except for the raw meat.