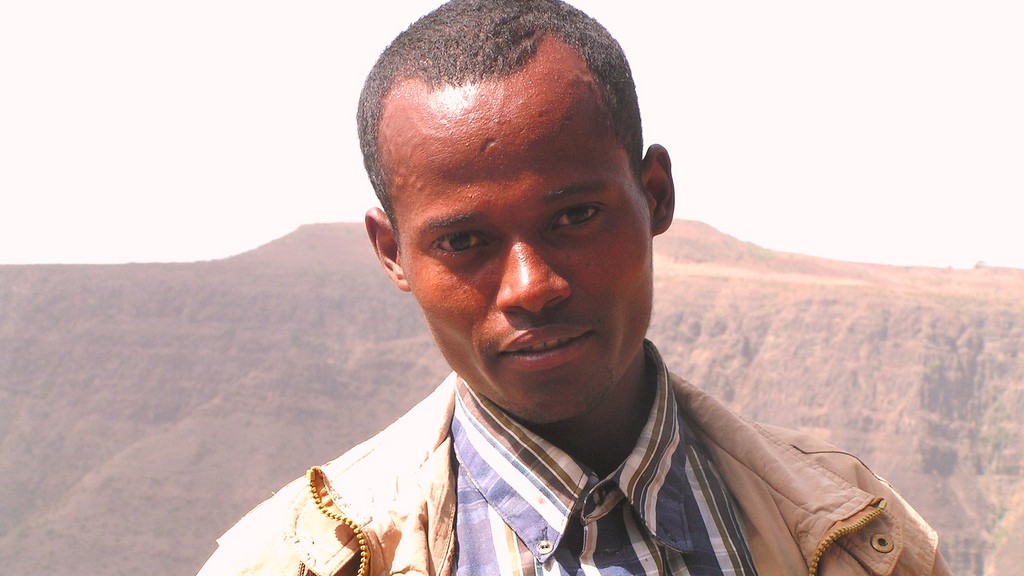 You may recall – – if you have been a regular reader of this space – – that SEF has a Solar Training Center in the town of Rema, to the north of Addis. On Thursday we made the long six hour drive there over what I had previously described as one of my top ten driving routes (anywhere). The journey still ranks up there. This time, courtesy of the rainy season, the view was imminently greener than before and just as eye catching. A new addition to the view was farmers, each plowing his rain softened field behind a team of oxen. Just like we did as kids.

Shortly after arrival, we took a sunset walking tour of Rema. As before, the kids swarmed us, wanting to shake hands with every foreigner in our group (two Germans plus me.) To gain respite from the well meaning, but relentless onslaught, we took refuge in a local bar. The barkeeper barred the kids and served each of us a solar cooled beer. Actually, the sun indirectly cooled the beer – – by powering a refrigerator. Before SEF, tepid beer, warm coke, room temperature water was the norm.

After the sun had set we walked back to the Solar Training Center. It was very dark on the return path, allowing us to see the Milky Way spilling across the sky above. But at house level, from virtually every home, a soft light emitted. Remember, every house in this town of 2500 families, has a solar home system.

The residents can actually conduct activities at night. They used to eat dinner at dusk – – around 6:30, then go to bed by 7:30 when it was totally dark. Now with solar powered lights they can eat after the sun has set. The school kids can play in the afternoon, then do their homework by light. Tailors can work in the cooler evening air. Some say Rema is the luckiest town in Ethiopia. No other town in the country has free, non polluting power in every home. And all of it was given to them by SEF.

The reason I went to Rema was to conduct a training workshop for 19 SEF personnel: systems installers, supervisors, and home office staff. Working under the belief that we all must be a sales person for the organization…and with the observation that SEF personnel were not yet well honed public speakers…I designed a full day of sales presentation training for this group. Theoretically all spoke English – – however that premise was mostly theory. My presentation was in the simplest language I could devise. For example I edited, “All sales people interact with their customers” to “All of you talk to customers.” But often that was not nearly simple enough.

In preparation we had to consider poor country logistical constraints. We had planned to purchase a metal flipchart stand to use in the training. But SEF found the price too expensive so we instead applied third world technology by using electrical wire to hang the flipchart pad from random, but fortuitously placed nails in the wall. We didn’t have to worry about power outage though: at SEF’s training center everything is powered by solar batteries well charged by plentiful sunshine

At one point we broke into small teams to practice our presentations. The door to one breakout room was locked and the key was not to be found. (My bad – always check all logistics before the session begins.) Anyway, that team met instead in a storage shed and took it all in stride. They are used to this sort of improvisation.

There was one slightly disruptive episode when some local kids brought their donkeys into the courtyard in front of the classroom to water them at the training center cistern.

I taught my class the basics: stand up so they can see you, speak up so they can hear you, sit down before you bore them. (I learned that gem of wisdom in the Army.) I taught them to sell the benefits of their solar systems, not just the features. E.g. Feature: This is a 10 watt solar system. Benefit: A 10 watt system can power four lights (in different rooms if you wish) and also a radio.

Initially, the group was quite reticent to answer my questions. Several did not understand my simple English and even if they understood, they couldn’t formulate a response in English. Many had never spoken in front of a group before. However when we broke into smaller teams of six people most of them flourished. They learned how to make an “elevator speech.” For those of you unfamiliar with this business term, it means a short speech or explanation that you can deliver in the time it takes an elevator to lift you from the ground floor to your office in the skyscraper.

But we couldn’t use the term elevator speech, it would not translate culturally. There are very few buildings in Ethiopia tall enough to warrant an elevator and some that are tall enough can’t afford one. I am pretty certain that some of my training class had never ridden in an elevator. (Nor in a Mercedes, an airplane, or a ski lift.) We described this short speech as a “60 Second Speech.” Each student ultimately delivered one in English. And several of them I actually understood.

At a sales training session in the US, I had seen one company award $1000 to the individual who gave the best sales presentation. I suggested this incentive to SEF management, scaled in size to the local economy, of course. The winner here received $30 and she was just as thrilled as the $1000 recipient in the US.

The training session ended with a self graded quiz…a very simple self graded quiz that some had difficultly with. Here is a sample question that was challenging for them to understand:

1. Which direction should you face when presenting from a flip chart?
a. Face the chart
b. Face the audience
c. Face the door

But despite the problems I have described, the session was a success. Samson, CEO, and Worku, CFO, were thrilled with the progress of their staff. And your humble trainer was also quite pleased.

After the session, Worku took me to visit a traditional round wooden church just outside Rema. The church guard was very poor. He was barefoot, wore shorts and a ragged blanket around his shoulders. A sort of modified Mahatma Gandhi look. For his troubles to open the locked church gate for us, I offered him 2 birr (18 cents.) He refused, correctly sizing up that I was not a local, he said, “Your country is so far away; you need this money more than I do.” First time in Ethiopia that someone tried to give money back. (I insisted and he reluctantly accepted.)

Back in Addis on Sunday I took a walk to the Shola Market, a very large and active market of open stalls selling food, clothing, shoes, furniture, fabric, and much else. I took the obligatory photos of the spice and grain shops displaying baskets piled high with multihued lentils, grains of every shade, ground chili, and red, yellow, and orange curry. Very colorful. In the market, I passed an open area filled with 20 foosball tables, nearly every one in use and surrounded by spectators. Most of the tables were barely functional, missing miniature players designed to kick the ball and missing handles designed to grip the flipping bar. But the players were enthusiastic nevertheless.

On my walk back to the hotel I stopped to watch a real football (soccer) game in a vacant lot. The soccer pitch was a challenging combination of wet mud holes surrounded by sun baked mud that had hardened into semi-concrete divots. Adding to the challenge for the players was the lack of uniforms – – unaffordable to the teams. They wore whatever shirt they owned. Watching a red shirted attacker guarded by a red shirted defender, confused me and I wasn’t even on the field. I had no idea whose side the green and blue shirted players were on. So I left.

You may recall my blog entry several weeks ago about the women firewood carriers, the ones who labored all day to bring very heavy loads of wood from the forest back into Addis. Well today I saw a sign for the “Former Women’s Fuelwood Carriers Association.” Someone has organized these women, taught them to make saleable crafts so that they can earn money – – more money than by lugging backbreaking loads of firewood for less than $2 per day. Less wear and tear on the body too. I doubt that I could carry loads as heavy as these women do. Anyway, this sounds like a good organization bringing benefits to these women.

I learned a new word today. Previously I reported that the Ethiopian term for foreigner is “farengi.” Well, their own term for an Ethiopian is “habesha” which means literally, “burnt face.” This is meant to connote that Ethiopians are darker than farengi, but lighter skinned that other sub-Saharan Africans. They take great pride in being different – – both in shade and in culture – – than the rest of Africa.

Tomorrow I will make the 24 hour journey back to Boston for six weeks of personal battery recharging. I will return in September for my final stint with SEF and with the habesha.