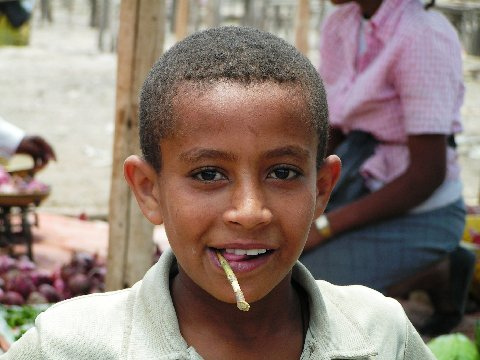 One observes the run up to the Ethiopian New Year on September 11 (only coincidentally a date seared in Americans’ minds) in the few days prior. Shops and restaurant scatter fresh cut long stem grass on the sidewalk, at their doorways and even inside on the floor. I think it gives them a rural village feel. The ubiquitous street vendors have added celebratory bottle rockets to their product line. Women (and their daughters) begin appearing in traditional white thick gauzy fabric dresses bordered with multicolored patterns around the hem, waist and sometimes shoulders. And for the first time I have been in Ethiopia, I observe men in traditional outfit as well: white trousers, shirt, and shawl of a similar fabric to that of women.

Depending on one’s economic class, the traditional New Year’s feast is meat. In the last few days leading up to the big date, more people than usual are on the street taking home live meat: chickens held upside down by the feet, goats carried over the shoulder, sheep led by a rope around the neck. I even observed more oxen in the streets around my (urban) office. People from the surrounding countryside drive their small herds into the city in increasing numbers just before September 11 to take advantage of the peak in demand for feasting meat.

Robin observed employees of a small company killing, butchering, grilling, and feasting on what had been a live goat. It took the entire New Year’s Eve afternoon. And in a related note, the next morning we spotted, for the first time, two vultures on a perch above the butchering area. I suspect they smelled the blood. Unfortunately for the vultures the only carrion left was goat heads.

Early on New Year Eve I went to the gym to get my weekly yoga fix. Afterwards in the gym parking lot I discovered that the gym management had set up a bonfire for gym patrons (including Robin and me) to celebrate the coming year.

About 50 of us gathered to participate. Each man was given a 10 foot long bundle of straw – – dampened to control the burn rate. We each lit our bundle from a small fire in the center of our gathering, we then tossed the burning straw onto the central fire creating a larger flaming tribute, a bonfire, to the coming year. As soon as all straw bundles had been dropped on the central bonfire, the gym staff began circulating in the crowd, offering helpings of roasted meat: mutton, beef, maybe others. None of which could be considered haute cuisine, and all of which, should be considered quite tough and chewy.

A couple large bowls of popcorn and cups of steaming espresso wrapped up the early New Year’s Eve celebration. Then we were off to our main event. The day prior Robin had met an American jazz band from Philadelphia that was staying in our hotel. They were scheduled to play at a venue on New Year’s Eve and had invited Robin (and me by proxy) to stop by. As Robin had understood, the venue was the Yugo Center – – the former Yugoslavia Cultural Center.

However, when we arrived we discovered the venue was actually the You Go Bible Study Center and the anticipated jazz was instead, gospel music. Only after we were seated inside did we realize that we had joined the Ethiopian version of an American tent revival meeting. Three thousand people inside swayed to the gospel music, shouted halleluiah and amen to the preacher’s exhortations. Frequently members of the audience would raise a hand (or both) and sway from side to side with eyes closed as if in rapture. But we knew we weren’t in Kansas anymore when audience members began to ululate and the gospel singers on stage began to leap vertically into the air – – a not uncommon African tribal dance ritual. The Masai in Kenya do this for example. Except for the Philadelphia band members, we were the only westerners in the 3000 person meeting hall.

Regardless of one’s religious inclination, this was a very moving experience…except that there were too many long sermons in Amharic between the musical numbers. Multiple preachers offered their guidance to the congregation. We left after 1.5 hours. The full revival ran from 6 PM until 4 AM – – 10 straight hours of religion – – and I suspect many of the 3000 Ethiopians stayed for all of it.

To wrap up the long New Year’s weekend we took a Sunday day trip to Ziway Lake, about two hours SE of Addis. We hired a row boat with driver (rower?) to visit two of the lake’s islands: one with an abandoned small village (my first Ethiopian ghost town) and the other with hundreds of cacophonous water birds: Marabou storks, herons, ducks, black egrets.

But the highlight on the water was passing by a dozen swimming hippos. We had to stay at a safe distance, but thanks to the magic of telephoto lens, I have memorialized this experience. Hippos, despite being vegetarians, are very territorial and protective of their young. I have read that hippos kill more humans in Africa than do lions. But due to our New Year’s good luck, they didn’t get us.