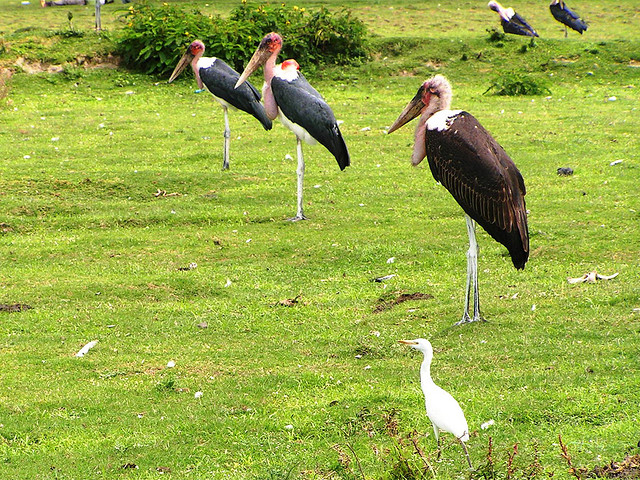 The small city of Harrar lies 13 hours by bus east from Addis. I opted for the 50 minute plane flight. Price for foreigners: $300; for residents of Ethiopia: $88. Didn’t seem quite fair to me, we both fill the same seat. But I lucked out. Since I flew into the country on Ethiopian Airlines, I automatically qualified for the resident rate. Quite fair after all.

We landed in the country’s eastern region, heavily Muslim, near Somalia. But not dangerously near – – still 180 miles or an eight hour drive to the border.

My guidebook described Harrar as the fourth most important city in Islam. For those of you keeping score: 1. Mecca, 2. Medina, 3. Jerusalem, 4. Harrar? Note: My daughter, Alison, who is well schooled in these matters, tells me #4 really is a town in Tunisia. And besides, she had never heard of Harrar.

Whatever its Islamic rank, Harrar is a fascinating place. It is a walled city (one of very few in sub-Saharan Africa) dating from the 1500s. One enters the old town through one of five city gates, then wanders, semi-lost and disoriented, around a labyrinth of winding alleys. These pedestrian pathways are mostly cobblestone and are flanked by whitewashed walls which keep prying eyes (mine) from the courtyards within. But with enough surreptitious glances as people entered and exited their homes, I caught a pretty good composite view of the flowery and attractively painted interior walls within the courtyards.

As picturesque as Harrar is, one would never mistake it for a quaint walled European city. This is the Ethiopian version: crowded, rundown, and more trash – – but fascinating all the same…and soon to be designed a UNESCO World Heritage Site.

Being an upmarket kind of guy, I chose the Belayneh Hotel, the nicest in town. And at $11.80 per night, quite a bargain. But nicest in town is a relative term. We had electricity in the hotel on just one of the three days I was there. Consequently I was able to stay in a romantic candlelit room. Showering was permitted two hours each morning and again two hours in the evening – – strictly controlled by a shower head that emitted water only at the designated times. And in an interesting application of bone headed plumbing, the toilet flushed only during official shower times.

Outside the city walls, in the so-called new town, I stopped under some shade trees to rest and to review my guide book. A nearby shop owner and a couple of his friends soon started up a conversation with me. It wasn’t much of a conversation though. They spoke little English and my few memorized Amharic phrases didn’t get us very far. Furthermore, their native tongue wasn’t even Amharic, it was Oromo. My guide book has a table that translates English into several of the significant Ethiopian languages. So, instead of conversing, we looked up words and phrases in English, Amharic, and Oromo and laughed as each person tried to read a word in a non-native tongue. I’m not sure what was so funny about that…but the simple joy of laughing (mostly) at ourselves was refreshing.

I later stumbled across the qat market. Pronounced chaat in Ethiopia, qat is a shrub with green, bitter leaves. The locals chew the leaves to release a stimulant which gives sort of a quadruple espresso buzz. Only thing is, later I saw numerous qat chewers semi-reclining along the old town alleyways each with a large pile of qat leaves. They didn’t seem hyper-caffeinated; they seemed kind of zoned out. They would spend several hours of the afternoon pursuing this time wasting, non-productive pastime. For the record, qat is legal in some developed countries (UK) and illegal in others (US.)

From my hotel balcony I had a bird’s eye view of the Christian Market. So called because it lies outside the city walls and most of Harrar’s Christians live outside. Inside the walls Muslims predominate and, not surprisingly, the main market there is called the Muslim Market. One observes both religions at both markets. Anyway, I overlooked the firewood section of the market. Teenage girls – – never boys for this task – – would pass my hotel having traveled several miles, each with a large bundle of firewood balanced on her head. Donkeys would bring in heavier loads. Over the course of the late afternoon the firewood market took shape with an ever growing supply of product arriving by female head or donkey back. Each girl could expect to receive $1.50 – $2.00 for the firewood she had likely spent the entire afternoon bringing to market.

Friday night seemed like a good time to watch Harrar’s Crazy Hyena Man (CHM) feed wild hyenas. For a $5 tourist contribution, CHM will feed raw meat to these very scary animals. They look mean with big heads, sloping hindquarters, and fearsome teeth. Hyenas will even occasionally ambush and kill a weak lion. Anyway, four hyenas showed up from the forested hills surrounding Harrar, lured by the smell of raw meat and the familiarity of CHM’s calls to them in the darkness. I had arrived at the feeding site by taxi and by design, the taxi driver stayed to shine his vehicle headlights on the feeding activity.

Crazy Hyena Man began by tossing pieces of meat to the four wild creatures. They snarled and snapped at the meat. Next he fed them by hand, actually by a 12 inch stick with meat hanging from it. But the coup de grace was when he held the stick in his mouth and offered the meaty end to wild, fearsome, unpredictable carnivores. Next he explained it was my turn.

I told him I didn’t eat raw meat. Of course he really meant it was my turn to have my hand and face within 12 inches of powerful hyena jaws. I read somewhere that hyenas have the most powerful jaws of any carnivore on earth. All the better to crush bones to get at their marrow. Since I cherish my hand and face marrow, I took a pass on this once-in-a-lifetime opportunity. I remained at a safe distance and snapped headlight-illuminated photos of CHM and his snarling, wild friends.

The next morning I hired Girma as my guide to take me to the Valley of Marbles. We began our journey at the bus station in Harrar, boarding the bus a few minutes before the designated departure time. But departure, despite what the schedule says, is dictated by filling the seats. So we waited…and waited while the driver attempted to Shanghai other eastbound travelers onto our bus. At several points, some passengers grew tired of waiting and attempted to exit the bus, Animated shouting would break out, some flagrant gesticulating, but no touching. After 45 minutes we left, pointed eastward toward the small market town of Babile and the Valley of Marbles a couple of miles beyond.
This region’s inhabitants are ethnic Somalis: same language, religion, dress of their cousins in the failed state. (We were still 150 miles from the border.) Some Somalis live in straw huts. Made from a type of reed, these homes resemble oversized witches hats minus the brim.

The Somali women love bright colors. Those who really pop wear a lace-fringed ankle length skirt, overlaid by a gaudily printed wrap-around to the calf (so that the lace shows below,) followed by an equally gaudy blouse with yet a different vibrant print, then a shawl, often a powerful yellow, orange, or green color. They cover the head (but not the face) with one, sometimes two, additional loud patterned scarves. All these layers are light and breezy as is appropriate in this hot climate. They are also loose fitting so as to obscure the female figure. These multiple competing layers scream for attention. But it all seems to work, unlike, say, when I wore a stripped shirt and plaid polyester pants in college.

The Valley of Marbles is a beautiful mountainous landscape of giant monolithic granite blocks, up to 40 feet in height. Many stand upright, some balancing atop the block (or blocks) beneath. On the rocky/sandy ground were scattered thumb size chunks of marble. Marble and granite are related minerals and are often found together. Scurrying over the granite blocks were rock hyraxes. A rock hyrax is a football sized mammal resembling an overgrown guinea pig. Oddly, it is the closest living relative to the elephant. If you have difficulty understanding how an overgrown guinea pig can be related to an elephant, take up your concerns with a taxonomist. I offer no further explanation.

On Sunday morning I again ventured inside the walls of the old city, destined for a row of sidewalk tailors manning their foot treadle sewing machines. An overzealous laundry lady at my hotel had torn a hole in my favorite micro fiber, wick ‘em away traveling trousers. I was seeking a tailor to make the repair.

I approached the first sidewalk tailor and inquired the price of an on-the-spot repair. “Three birr.” (27 cents) At this low price, I chose not to bargain and handed over the torn trousers. However, a local passerby elected to bargain for me. “No, only one birr.” (9 cents).

This intervention so enraged the tailor that he rose from behind his antique sewing machine and picked up his sharply pointed scissors. Before he could close on the uninvited bargainer, another local stepped in to restrain the scissor wielding, price gouging tailor. And before this situation could fully resolve itself, I collected my micro fiber pants from the now vacant sewing machine and beat a hasty retreat down the cobblestone alley. And besides, it looked as if the tailor was planning to use white thread on my favorite tan trou.

The entire weekend I spent in Harrar, I saw just one other westerner. Being (almost) the sole outsider, gave me a feeling of total immersion in the Harrari culture. The morning I left, I met a lawyer from NYC. He talked too much. The reason: lawyer? Or from NYC? You decide.