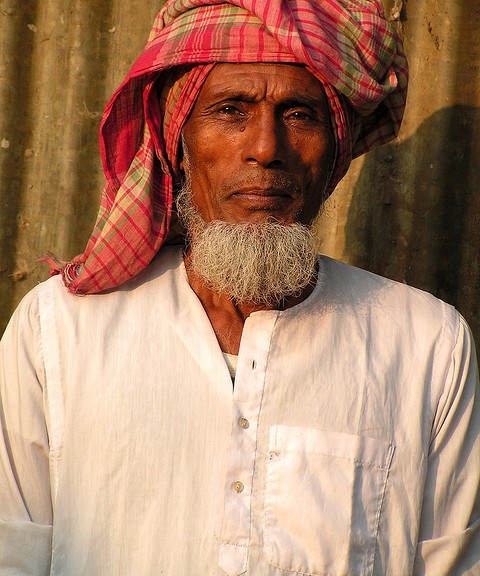 The Buriganga River runs through the capital. I went down to the docks of the teeming river port in Old Dhaka where dozens of river steamers and a few big paddle wheelers were moored, ready to take people all over the country. Remember the country is pretty much a giant river delta (the size of Iowa) and the roads are slow, so the rivers become an indispensible transportation network.

I took a boat trip, but only a short one, and on a small boat. I sat on the floor of a wooden taxi boat, just a few inches above water level. The taxi boat was propelled by a single large oar, wielded by a standing boatman. I was the only passenger. We dodged the big river steamers and the hundreds of competing taxi boats that were transporting people and goods across the broad river. My driver spoke virtually no English and I never did understand his name, but I will call him Bangla (which means Bengali.) Somehow we communicated enough that he knew to take me to far side of the river as my guidebook had suggested.

When we got to the far side he said something like, “Go shore,” which I interpreted to mean we would pull up on the far bank and take a walk. We came ashore next to a schoolyard where I instantly became the center of attention for five classes of elementary schoolgirls. They ran up to try out the three English phrases they had learned: How are you? What is your name? And, what name your country? (America turned out to be a popular answer.)

From the school, Bangla led me through a warren of alleyways, no more than two to three people wide. I thought he was just showing me around, but after 10 minutes of zigzagging through the area, he ducked under a three foot high doorway; I bent over to follow into a small courtyard with 10 single rooms opening onto it. Each room housed a family and all the families were a related extended family unit. We sat in Bangla’s 10×10 one-room home. His wife brought tea and cookies. His three young toddlers showed up on foot or in the arms of the grandma. The doorway and single window were soon crowded with extended relatives peering in at the unexpected stranger who had appeared with the boatman.

Throughout my third world travels this sort of home invitation has happened before and I still never know exactly why I have been led into someone’s home. In this instance, I didn’t know whether this visit was a ploy to get me to leave money for the extended family. If not, offering money for genuine hospitality would be a major insult. Or maybe it was just a thrill for Bangla to show me his home and to show his relatives his foreign customer. Anyway, once he took me back across the river to my starting point, I paid him our agreed upon fee, 100 Bangladeshi taka ($1.25) and then gave him a tip of 100 more, “for your good service and for your family.” I doubt he understood what I was saying, but he gratefully accepted the money.

On Wednesday I went to Kasherpar village with a business colleague, Muzammel. He had invited me to spend the night at his farm in the countryside so that I could observe renewable energy applications in rural areas. Kasherpar is 100 miles SE of Dhaka, near the eastern border with India. Bangladesh also has a northern and a western border with this all-encompassing neighbor.

To reach Muzammel’s village required five frightening hours to travel 100 miles on Bangladesh’s highways. In fact, this journey ranks among my top ten scariest highway drives of all time. It took two hour just to get out of traffic choked Dhaka where red lights seem to be a suggestion, not a command. Once on the highway I learned the rules of the road: Pedestrians (yes there are pedestrians on the highway) must give way to rickshaws. Surprisingly there are rickshaws too, and a pedal powered rickshaw moving at 8 mph is quite an impediment to a car flying up behind at 60 mph. This is not a safe highway situation. So the rickshaws in turn yield to cars which are supplicant to trucks. But the large cross country buses lord it over all of us.

Now let’s put this into practice on the two lane highway. Our driver begins his passing maneuver, overtaking a slower moving car, but here comes a rickshaw head on – – it will swerve to the shoulder. We are bigger. Now back in our driving lane we spot a large bus passing a truck, thus both lanes are filled with multi-ton vehicles bearing down on us, head on. Theoretically we have the right of way – – we are in the correct driving lane. But the bus, is still coming straight at us, its driver makes no effort to return to his proper lane. So we do what the rickshaw did earlier, we slam on our brakes and veer to the shoulder. Catastrophe avoided. But my heart rate has increased and it never subsided. We repeated this drill every other mile on the way to our destination (or about 50 times over 100 miles.) The last hour of our drive was in the dark and I discovered that the majority of vehicles at night drive with their lights on.

The final half mile was pleasant though. That’s when we turned off the highway to Muzammel’s village. Down a twisting, tree lined road, past a few small shops, homes, rice paddies, and a country mosque, lay Muzammel’s farm – – a most idyllic sanctuary. He uses this as a retreat from hectic city life (and I would guess a retreat from frightening highway traffic as well.) By the way, the return trip was equally harrowing and ranks among my 11 scariest rides ever.

The 70 year old farm house has been in his family for 70 years. He has created a sustainable farm that runs on renewable energy – – a real benefit in a poor country that can’t afford to import enough oil and natural gas to supply uninterrupted electricity. The farm has solar panels for home lighting. It also has a biodigester which turns cow manure into methane gas to fuel the kitchen stove. As well, the biodigester processes the manure into high quality fertilizer for his fruit trees and vegetable gardens. He can even feed it to the tilapia in his fish pond. Muzammel keeps cows for milk, and goats, pigeons, ducks, and chickens for meat. Every meal we ate there came from fresh, organic farm produce. My delicious and healthy breakfast consisted of fresh grated coconut meat with homemade date syrup poured over, then eaten with a type of Bangladeshi pancake. Oh so good.