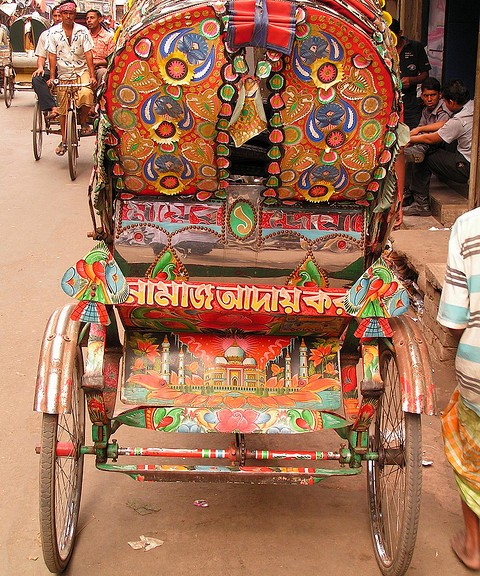 The food here is pretty good. Sort of like the Indian food we find in restaurants in the States. Just not as diverse; but one can still find chicken biryani or jalfreezi, curried fish, spicy vegetables, and breads: paratha, roti, naan.

But rice is the main staple. Put chicken or fish right on top of a mound of rice, add some sauce, then with your right hand only (no utensils), roll up a large marble-sized ball of the combo and pop it straight into your mouth. The Bangladeshis are so dexterous at this. I, on the other hand, can create the round bite, but I can’t effectively move it to my mouth. It usually seems I have created an exploding ball. White rice, soaked in sauce with bits of chicken, flies all over the place…including onto my shirt. The only time I don’t end up with chicken on my shirt is when I order fish.

Rickshaws in the dark are tough to see. No running lights and no reflectors makes them nearly invisible at night. And since the soft sound of pedaling is drowned out by traffic noise, they are essentially silent; so in the evening when I step off the curb into the path of a fast pedaling wallah, I have not seen him coming, I have not heard him coming. At the last minute he will ring his little bell, giving me a fraction of a second to recover to the sidewalk. And in turn, the rickshaws are equally threatened by cars: the drivers can’t see unilluminated rickshaws. And many streets do not have functioning streetlights…not enough electricity to go around. I have vowed never to ride in a rickshaw at night. Just too risky.

I did take my first rickshaw ride last week in the daytime though. Actually felt kind of guilty at first. Here I am, an able bodied man and I hop in behind a skinny little rickshaw wallah and have him pedal me around town. I would have preferred to pedal myself, but that just isn’t the way things are done around here. I did note that hundreds of thousands of local people were filling the hundreds of thousands of rickshaws and this is a very practical way to get around. Non polluting. Takes up less space than a car. Cheaper than a taxi: 14 cents vs. $1. Ultimately, I enjoyed the ride. Fast enough to get around, slow enough to see things, and a fresh breeze on my face. Maybe not a fresh breeze, but at least city air blowing across my face. Only the bus to my right and the lorry to my left made me feel slightly vulnerable. But never at night.

The national sport is cricket. So is the national passion. When I walk past a dirt lot or a pocket park I spot multiple pick up cricket matches underway. In a country that has a paucity of land and a plentitude of people, there are usually more matches in play that common sense and space would allow. Hard rubber balls are flying everywhere. Just like my rice at lunch. Even though I lived in London for three years, I don’t know much about cricket, never really followed it. I do know that it is about as deliberate as baseball. Someone once timed the true action in a baseball game. While it normally takes 3 – 3.5 hours to complete nine innings, the actual elapsed time when the ball is live and in play is a whopping nine minutes. And I’m not making this up. I read it somewhere so it must be true.

I went to a business conference in Dhaka where I discovered that Bangladeshis love their cell phones…and they just can’t seem to turn them off. While the Canadian Ambassador and the Bangladesh Director of Infrastructure and other luminaries were speaking, phones were ringing in the audience. And ruder yet, audience members were answering…and talking. Fortunately for me, one row behind, a guy talking loudly on his cell was engaged in a conversation far more interesting than the Ambassador’s presentation that he was drowning out.

At this conference I also learned that Bangladesh has a vibrant business media. Swarms of reporters and cameramen attended and they packed the space between the speaker and the audience. Half the media trained their cameras on the speaker, the other half aimed their cameras and bright lights at the audience. So many cameramen and such bright lights that I couldn’t see the speaker. But didn’t matter, I couldn’t hear him over the cell phone chatter anyway.

One thought on “The Rickshaw Risk”