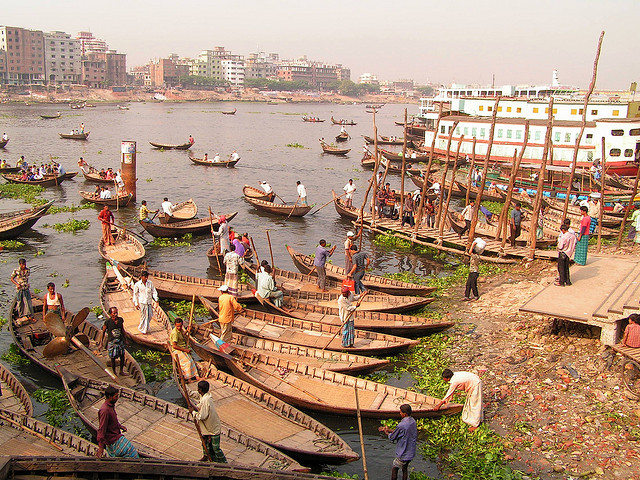 I am in Dhaka, the capital of Bangladesh, where I will spend two weeks evaluating the viability of a new renewable energy venture for a client. Bangladesh is nearly halfway around the globe from Boston so it took a long time to get here, 29 hours door to door. Really confuses the ol’ body clock, but nothing like a good night sleep to get one back on track.

Bangladesh has a lot of people, 156 million, making it the seventh most populous nation on Earth. But it is relatively small, about the size of Iowa. Imagine taking every other person in America and jamming them into Iowa. If you did you would understand why Bangladesh is the globe’s most densely populated country. (I have excluded tiny island nations like Singapore or other odd jobs like Monaco or the Vatican.) But as far as “normal” countries go, it’s the most crowded. And when you factor in the water – – this country is basically a giant river delta where three massive rivers (Ganges, Brahmaputra, and Meghna) and countless smaller ones merge – – you don’t have a lot of land left to crowd onto. There is barely room to move on the sidewalks.

Nor is there much room for the vehicles. Traffic is dense and ill mannered. Drivers weave in and out, just get a nose in front and you can cut off the guy next to you. Horns are always beeping, at night high beams flash an additional admonition to fellow drivers. Vehicles of all types constantly vie for position. Dilapidated buses, fume spewing trucks, beat up cars, overcrowded taxis, and golf-cart-like tuk tuks. But in addition there are several hundred thousand (yes, several hundred thousand) pedal powered rickshaws. These three wheelers are driven by a rickshaw wallah. At crowded intersections, hundreds of them cause traffic jams in their own right, even without the help of the other vehicles mentioned above. And a most colorful traffic jam at that. Every inch of available rickshaw surface – – sides, back, cover, seat – – has been decorated by the wallah with the gaudiest art imaginable. Because Islam has some kind of restriction on depicting living objects, most designs are bright geometric and curlicue shapes.

Traffic jams are a good opportunity for street vendors to peddle their wares. When everything moving grinds to a halt, the peddlers flood into the street, weaving between the jammed vehicles, thrusting their wares up to car windows in hopes that a passenger, in a moment of weakness, will purchase a bag of popcorn, sack of peanuts, bunch of flowers, bath towel , dried noodles, books, and more. One book vendor stood next to the passenger window of my immobile car and displayed his entire library of 30 books, one by one, even though I had waved him away before he had even started. Perhaps he thought I would eventually cave in and purchase. And like many in the third world who admire our new U.S. President, he saved the best for last, The Audacity of Hope. Even though I voted for the guy, I still didn’t buy his book…to the chagrin of the relentless vendor. Still he wouldn’t go away. Only the movement of traffic eventually freed me from the unwanted book presentation through my closed window.

The language is Bengali. 200 million speakers make Bengali the seventh most common native tongue on Earth. (The rankings for you linguaphiles: 1. Mandarin, 2. Hindi, 3. Spanish, 4. English, 5.Arabic, 6.Portuguese, 7.Bengali.) But very few of them speak English, despite Bangladesh being a former British Colony. And Bengali uses the Sanskrit alphabet which looks more like artwork than letters to me. At least I paid attention in yoga class when the instructor announced positions using the Sanskrit term. As a result, about the only thing I know how to say is down dog. The business people I come in contact with are well schooled in English, but I can’t communicate much with the man in the street.

And it is mostly men in the street in this predominantly Muslim country (85% Muslim, 10% Hindu, 5% all other.) Even though Bangladesh follows a relatively secular strain of Islam, women tend to stay home. Those who do come out are dressed in a most colorful, but conservative, sari and cover their hair, but not their face with a shear scarf. Very, very few are veiled.

This is a poor country. Bangladesh ranks 196 in GDP/capita out of the 229 countries tracked by the CIA. (And no, I’m not in the CIA. I just looked up their easily accessible database. You can too.) Because of the poverty, there are beggars and very persistent ones at that; like the lady who stood beside my immobile vehicle (did I mention the traffic jams?) tapping non-stop and irritatingly on my window. That’s when I realized the book vendor wasn’t so bad after all.