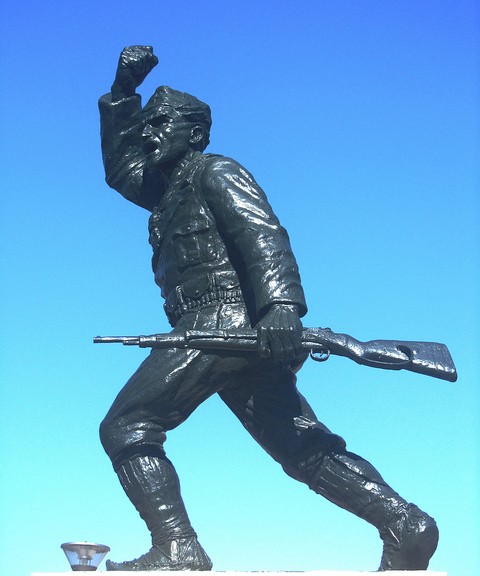 You can’t tell by looking, but Albania is a predominantly Muslim country. (70% Muslim, 20% Orthodox Christian, 10% Catholic.) As in many Muslim countries, men wear no distinctive clothing that provides a clue to the individual’s religion.  However, in most places the dress of the women is a clear give away.  But not here.  Young women of all religions wear tight revealing clothing, sort of like in Italy, but not quite to that extreme.  Pork appears on most every restaurant menu, as do alcoholic beverages.  Night clubs and bars pulsate.  I have yet to see a veiled woman and the number of headscarves I have seen can be tallied on one hand.  White domed mosques paired with graceful minarets are scattered about…but I don’t see too many people going to them.

For over a decade in the midst of Dictator Enver Hoxha’s autocratic rule, Albania went through a period of forced atheism.  Religious practice was absolutely forbidden.  Perhaps that is why even today Muslim is more of a heritage or cultural artifact than a rigid guide to living one’s life.  I suspect Albanian Christianity is likewise.

The cuisine here is not world class, but it is pretty good.  Traditional Balkan food includes lots of grilled meats, varieties of feta cheese, and plentiful fruits and vegetables.  In Adriatic-hugging Albania one can find a fine selection of fresh fish as well.  Due to Albania’s Mediterranean climate – – we are on the same latitude as Italy’s heel – – at this time of year the open markets brim with oranges, tangerines, pomegranates, kiwis.  And just climb one thousand feet in altitude and one finds more temperate fruit: apples and pears.  So, while I pretty much avoid the heavy meat portion of the menu, I can find much that appeals to my palate.  Including, of course, many Italian-inspired pasta dishes. The Italians were good enough to bring their food with them during their many occupations of neighboring Albania.  Augustus Caesar was here (but rushed home upon news of Julius’ assassination on the Ides of March.)  Mussolini sent his fascist troops as well.  Fortunately, today big Italy and little Albania are good friends.

The Italians were not the only invaders, we can include the Germans, the Greeks, the Bulgarians, and especially Turkey and its Ottoman Empire.  They controlled the country for 500 years leading up to World War I.   All these invasions could bring on paranoia – – who is coming next?  Well, Enver Hoxha, a master of paranoia, wanted to make sure that the next invaders were properly greeted.  Consequently he ordered 700,000 steel and concrete bunkers built.  This is 700,000 bunkers in a country of just 3.6 million people.  Safe to say that most ever family had one. These one-person bunkers were, and still are, scattered all over the country, but especially along anticipated invasion routes.   I have seen them on every trip I have taken outside of Tirana.

They are a solid round shell, about five feet in diameter.  Perhaps four feet is buried in the earth, the top foot or so, along with a small slit window, pokes above ground.  Every able bodied man was expected to collect a rifle and retire to his bunker when the invasion came.  Well, the invasion never came.  Hoxha passed away, communism collapsed, but 700,000 bunkers remained.  Unfortunately they are too small to turn into anything useful, like a disco or a snack bar, unless you like dancing and dining alone – – or much of anything else for that matter.  So they remain, like large concrete mushrooms poking through the earth, to remind Albanians and tourists of a confusing time in the middle of the 20th century.

My hotel stands on the edge of an area in downtown Tirana called “The Block.”  During Hoxha’s rule (we just can’t seem to get away from his legacy) The Block was a closed zone, closed to everyday people.  Only ranking communist officials could enter the area.  Their homes were here, as were shops that carried items the rest of the population could not get.  Today the block is the most happening area of Tirana.  It is packed with restaurants, bars, cafes, shops, and offices.  My office is here.   The area is lively from early in the morning to well past my bedtime.  After a busy day at work, I stroll around The Block, to pick out my restaurant.  I can always find a good menu that won’t set me back more that $10 – $15 max.

And now, back to Hoxha:  During his time private ownership of cars was not allowed; private business was forbidden.  Even such basic services as barber shops, cafes, shoe shines were all government run.  And not surprisingly, inefficiently run.

One of my Albania work colleagues grew up in the 1970s – – right in the middle of the communist era.  She told me that furniture factories turned out one style, and only one style, of each item.  Consequently, her family owned the same coffee table, the same sofa, and so on, as every one of their neighbors.  If by mistake, she stumbled into a friend’s home, she might not initially realize she was in the wrong place.  Presumably the friend’s mother looked different than her own mother.  If someone lucked out and was able to purchase a TV, all the neighbors would show up with boxes of chocolates to offer their congratulations…and also, I suppose, to jockey for an invitation to watch TV.  But they didn’t get “All in the Family.”  Hoxha wouldn’t allow that.