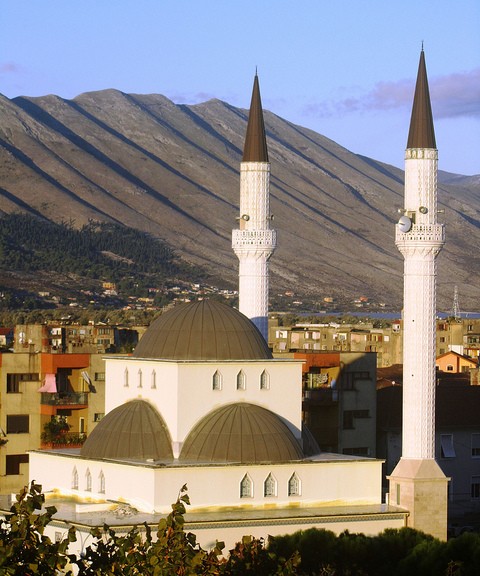 Albania is small, about the size of Maryland; with a population of 3.6 million, similar to metro Seattle.  And poor: ranks 42 of 47 countries in Europe in GDP per capita.  I am here for the month of October to help Albania – – or at least its footwear industry – – become just a little bit wealthier.  I am working on a USAID-funded project to bring modern sales and marketing tools to Albania’s inward looking footwear manufacturers.

Albania is in the western Balkans, north of Greece, south of Montenegro, west of Kosovo and Macedonia, and across the Adriatic Sea from Italy.  In fact, if Italy cocked its boot back any farther, its heel would thump Albania in the stomach.

I arrived on Tuesday to find a hybrid country.  At first blush, Tirana (the capital) looks much like the rest of Europe: modern steel and glass office buildings, up to date malls, vibrant cafes and restaurants, traffic jams.  But looking deeper I saw the signs of a still emerging economy: haphazardly strung electrical wires, cigarettes, gum, shoe shines sold by sidewalk vendors, open markets with piles of second hand shoes and clothing for sale, also used hand tools and cell phone chargers.  Hubcaps sold streetside.  There are plenty of local fresh fruits and vegetables in the markets, but also unrefrigerated butchered meat on display and homemade cooking oil sold in recycled plastic bottles of varying sizes.  And still crumbling, communist-era concrete block buildings. So Albania is clearly a mixed bag.

The country (and its industry) is still emerging from a half century of gross mismanagement by Enver Hoxha, Albania’s late paranoid communist dictator.  In fact following World War II until the early 1990s, Albania was Europe’s version of North Korea.

I am based in the capital, Tirana, but will take several trips to provincial towns elsewhere in the country where shoe factories are found.  In my first week I traveled to Shkodra in the far north near the border with the aforementioned, Montenegro – – a country so new (2006) some of you might not even know it exists.  I have already visited four shoe factories, and as an added bonus, one underwear factory.  I think my hosts threw that in because they heard I liked underwear.

I am working in an office headed by an American, but staffed with 13 Albanians…all of whom speak remarkably good English.  I speak remarkably little Albanian.  The language forms its own branch on the Indo-European language tree.  This means it is distantly related to English, Spanish, Russian, Farsi, but has no close cousins (like Spanish and Italian.)  One of the first things a student looks for in a new language is cognates, words that are recognizable from language to language.

I discovered some cognates on the menu during my first restaurant meal:  okotpod = octopus, birre = beer.  Other words were a bit more difficult to recognize: xaxiq = sour cream with cucumber, berxolle gici = Piggy chop. (Sounds too cuddly to eat.) One item was translated as “white cheese with aluminum.”  (Eat your trace minerals, children.)  The Republic of Albania is a partial cognate, Republika e Shqiperise.  The Albanian part, the non-cognate, is also totally unpronounceable.

Saturday was my first day off.  I walked around Tirana for a while to get the lay of the land and then took a taxi (seldom more than $5 anywhere in town) to the cable car on the outskirts of the city.  There I was whisked a thousand or so feet upward, high on the flank of Mount Dajti, spectacularly overlooking Tirana and its plain, then further west 30 miles  to the Adriatic.  I decided to hike to the actual mountain peak, nearly two hours above, to take in the scenery and to get some exercise.  I had had no exercise the previous two days, unless one counts watching shoes move along the assembly line.

I hiked uphill for two hours through what I thought was a national park…except that I saw no other hikers during the entire time. This seemed strange for a national park near a city of 700,000 to draw no hikers.  I began to realize I was not in the national park when the two rifle toting soldiers approached me.  An animated conversation in Albanian broke out.  They were animated and they spoke Albanian.  I mostly stood there dumbfounded, occasionally offering my two best Albanian phrases: “I don’t speak Albanian” and “Sorry.”

I gathered that I had been hiking in a restricted military area and the guards weren’t too keen on this.  However, eventually we became friends and they pointed me in the most direct way out and back to the cable car.  I wanted to take photos of them but thought it not wise to push my luck at this point.  But, they did have handsome uniforms.

On my way back to town I realized that I would actually make a very good secret agent with the ability to infiltrate restricted zones and then bluff my way past guards.  I have seen James Bond do this several times.  So maybe on my next gig…