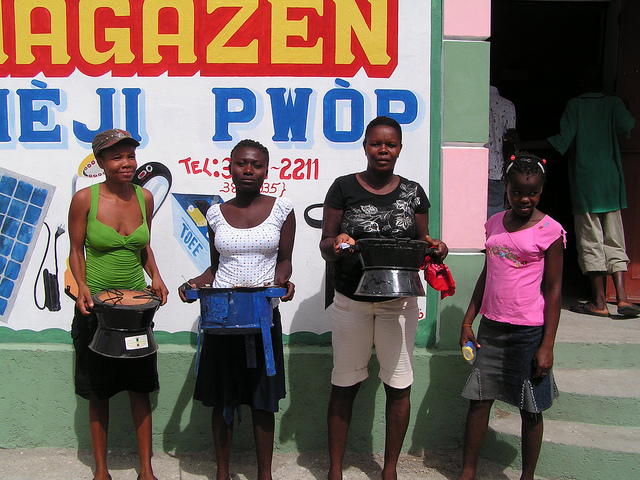 Farmers outside Les Anglais, this rural town of 5,000, are self employed. But in town, very few people have jobs and almost all are very poor. There are a few “ma & pa” stores that employ the owner and perhaps a family member part time. Such a store might be 10 feet by 10 feet in size and would sell daily necessities: soap, batteries, candles, bouillon cubes, etc. The largest (and perhaps only) employer in town runs the combined hotel, restaurant, internet café, flour mill, popsicle maker. He employs 10 people. Our new clean energy store will soon be a relatively large employer: 3 people and growing.

Unemployment is unmeasured, but it must be around 70%; consequently, there is a lot of sitting around on the sidewalk, especially in a shady spot during the heat of the day. I suspect most people exist on aid (e.g. Catholic Relief Services) and on remittances sent from Haitians working abroad. Despite the crushing poverty there are virtually no beggars in this rural area. But there are a few opportunists. I have been hit up to fund a motorcycle purchase, as well as a law school degree. I passed on both contribution opportunities.

We launched the Clean Energy Store on Wednesday. We started the day with a booth at the weekly market. Thousands of townspeople as well as countryside dwellers showed up Wednesday morning to buy their weekly food supplies, used clothing, plastic shoes, woven palm frond donkey saddle bags, and so on. Our booth drew a crowd to watch demonstrations of our efficient cook stoves and to consume the food produced. (Produced tastefully and efficiently, I should add.) We had a DJ who selected a music genre that appealed to young teenagers – – not exactly the target market for cook stoves and solar home systems – – but at least we drew a crowd.

That evening we brought in a group from Port au Prince called Sinema anba Zetwal (Cinema under the Stars.) They set up a large screen in the town square to show a variety of short environmentally themed films…and a few cartoons for the kids. Between films we interviewed local townspeople abut their energy use, we gave out information about our products, and then we raffled off a few of them.

This being a poor country, we didn’t’ sell the raffle tickets, but gave out the tickets in exchange for the entrant’s cell phone number. With residents’ cell numbers we can build a data base of prospective clients to text store updates to in the future.

Thursday morning we opened the doors of the store. The first customers who showed up held the winning raffle tickets from the night before. We did have a few paying customers as well…so now the Magazen Eneji Pwop is off and running. Keep your eyes on this remote tip of Haiti as charcoal use plummets and solar lighting begins to brighten the homes.

And now to wrap up, a few random observations:

The little kids call us rare visiting Americans, “blanc,” which means white. So as I walk down the street the young ones will shout out “blanc, blanc,” always in a friendly, good natured way.

Being a guy, I don’t travel with a mirror. The room where I stayed had no mirror, nor did the bathroom, nor the living room.  I later found that there was a mirror elsewhere in our host’s home; but at one point, I actually went eight straight days without seeing my reflection.  This doesn’t count using my cell phone screen to see a hazy view of a small, very regionalized part of my face.  Going without a mirror for over one week is quite liberating in a strange sort of way.  I was a baby the last time I went so long without seeing my reflection.  You should try it sometime.  It will help you to avoid one of the seven deadly sins, that of vanity.

One day I was laid low by a brief bout of food poisoning. Our hosts were very concerned about my health. They also spent some time discussing the likely cause. Ultimately, local folk wisdom settled on the culprit: I had gone on a bike ride that was followed by drinking hot chocolate. So much for believable folk wisdom.

The Haitians are devoutly religious, mostly Catholic. At each of the meetings we held with the local board of our store, the Haitians would begin and end with a prayer. But the most beautiful part of this was they also included an acapella hymn with each prayer. Really sweet music, from a really sweet people.

So now, with good feelings about my experience here, I will depart tomorrow. Thus ends my reporting from Haiti. This blog will go into suspended animation until I find my next special international opportunity.