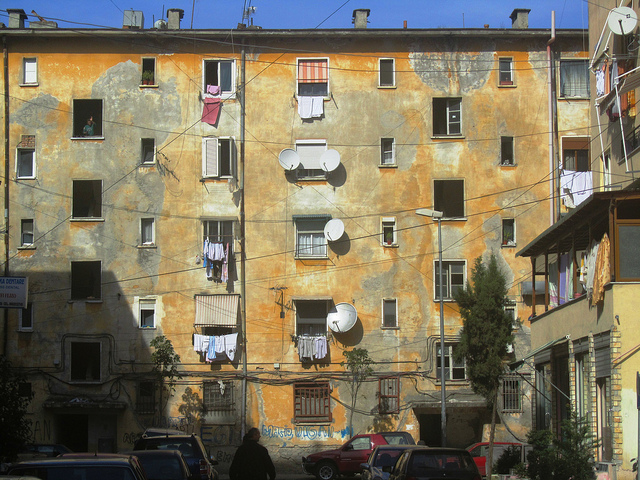 You may know the late John Belushi for his iconic role in Animal House.  You may also know his actor brother, Jim Belushi , and of course Regis Philbin, TV personality.  All are of Albanian descent.  But the most famous Albanian of them all was Mother Teresa.  Actually she was born in Macedonia, but at the time (1912) Macedonia was controlled by the Ottoman Empire and was administered by them as Greater Albania.  That’s enough for modern day Albanians to claim her as their own…and name streets and squares after her, erect statues, and hang giant posters.  I occasionally see elderly women with white head scarves, a la Mother Teresa.   They are very proud of her.

They are less proud of their Gypsy (Roma) population.  Albania is poor by European standards, but not by world standards.  The only people I ever see begging are Roma mothers, sitting on a busy sidewalk with young children draped over them.  It appears to me that such begging is more a lifestyle choice, that a poverty-induced requirement.  Young Roma boys hang around crowded streets in the evening.  As a car begins to back into a parallel parking space, a boy will make a show of directing the driver into the space…then stand near the driver’s door until the driver emerges and hands over a few coins for a service he didn’t ask for and didn’t need.  But wise just to part with the coins anyway.  This disenfranchised population – – and not just in Albania, but in many European countries – – needs to be integrated into society, but no one knows just how.

I have finished my footwear factory tour, taking in eight factories around the country.  Shoe factories are a big deal here, they employ 100,000 people – – a lot in a small country, and they account for 18% of GDP, again a big number.  Such factories provide needed employment and especially for women.  Few men work in the factories, perhaps because of tasks that are required – – cutting, stitching, sewing – – are traditionally viewed as women’s work.  And Albania, especially rural Albania where many of the factories are located, is very traditional.  Factories adjust their schedules so that their mostly female workforce can leave work in mid afternoon, shop for groceries, then arrive home in time to put a hot meal on the table for hubby.  Factories never run a second shift because that would require their female workers to be at work in the evening leaving father and children to fend for themselves.

Tirana is a mix of old and the new.  Old means decrepit, crumbling buildings from the communist era.  New means bright, shiny new buildings.  But not everyone can afford a bright shiny new building, so they do the next best thing: they paint over the old crumbling buildings.  And they paint with the loudest, gaudiest, most clashing colors available.  It is a visual treat to walk around town comparing the old, the new, and the painted-over.  Check out my newest photos.

I have had a very heavy work schedule here.  For most of my assignment I have been going 60 mph with my hair on fire.  Consequently, I decided that I deserved a break so I found a place to get a one hour massage at the relatively affordable price of $36.  By luck of the draw I ended up with a Philappina woman.  She was an excellent masseuse.  At least until she jumped up onto the massage table with me, then jammed her hands and knees into my lower back, balancing there as her bony joints dug into me.   In order to mask the sound of my spine rupturing, I began a conversation that I often use with foreigners.  “Are there any good Philippino restaurants in Tirana?”  (I knew there weren’t.)

A few days later I found myself at a birthday party in a private apartment with fifteen Philippinos – – one guy, fourteen women, and me, eating the finest Philippino food in all of Albania.  Based on the food alone, I think I’d like to work in the Philippines next.  And since my Albanian adventure ends tomorrow, who knows what will be next?  Stay tuned.