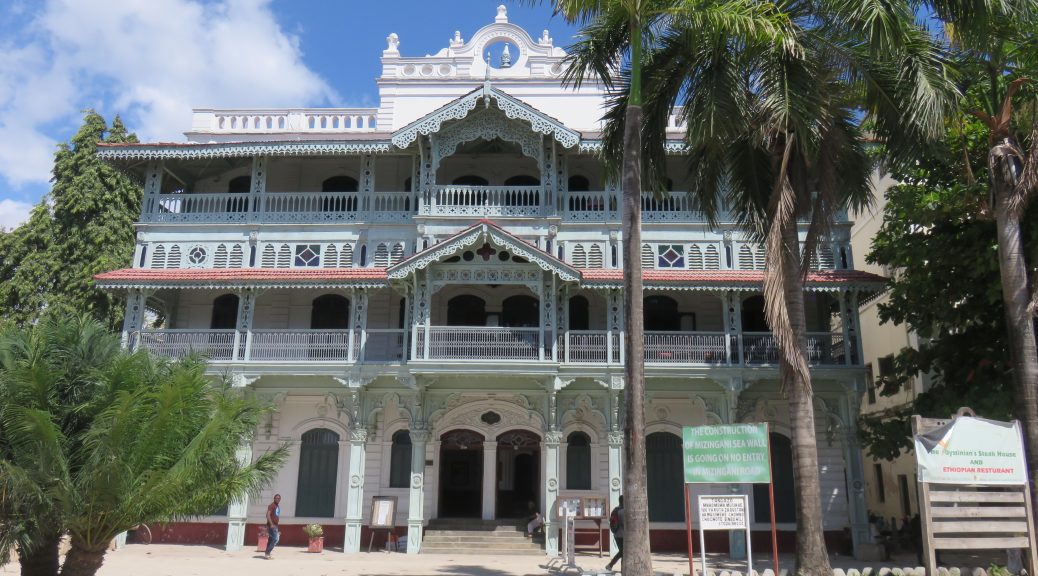 The last time I worked in Tanzania was five years ago. When recently offered another volunteer assignment in the country I gladly accepted.  I have spent nearly four weeks here working in two very different locations: Iringa, in the southern highlands near two big game parks, and Zanzibar, the country’s famous island just off the mainland in the Indian Ocean.  Zanzibar is a semi-autonomous region of Tanzania.

Starting in 1698 Zanzibar fell under control of the Sultan of Oman.  He eventually moved his capital to the island. But by 1890 the British had wrested control from the Omanis. For those of you who specialize in African place names, you will know that Zanzibar joined with Tanganyika shortly after the latter gained independence from Britain, its colonial overlord.  The amalgam of the current name, Tanzania, is derived from the two previously separate entities, Tanganyika and Zanzibar.  But more interesting than a blend of the names is the blend of cultures. Zanzibar is where Africa meets Arabia and India – – by sea, of course.  I would describe Zanzibar as a sort of poorer and more run-down Marrakech.  But fascinating.  Anyone visiting East Africa would be remiss to neglect Zanzibar.

The “Enabling Growth Through Investment and Enterprise” program or ENGINE is run jointly by an American and a Canadian NGO. I am here to offer training in basic marketing, promotion, marketing plans, and digital communication.  That last topic, digital communications, is better suited to my children’s generation than to mine.  But my children weren’t available for the assignment so I had to bone up on my knowledge and stay one day ahead of the class.

A local taxi driver asked the name of my (temporary) employer. When I answered, ENGINE, he thought I was an engineer.  Although years ago I did study civil engineering, I explained I was not an engineer, so he focused on the acronym, ENGINE.  He told me he was a great mechanic, and could I get him a job repairing engines? Communication across cultures and languages is often entertaining.

So is riding a bicycle in a poor country.  I had a free Sunday in Zanzibar and I signed on for a bike ride in a rural area complete with a visit to a spice farm.  Note: Zanzibar and nearby islands are sometimes called the Spice Islands…but, more commonly, so are the Molucca Islands in Indonesia.  But I digress.

My guide arrived at my hotel pedalling one bike while controlling a second bike by the handlebars.  Upon mounting the second bike I discovered the handlebars to be in good shape.  Not so, the height of the seat.  My knees were in my teeth and the seat frozen in the lowest position. Osman, the guide, said, “Don’t worry. We’ll get the engineer to look at it.” It turned out that he meant following the ride, after I no longer cared about the seat.  Two hours of up and downhill riding with knees in my teeth was really fatiguing.  My multi-hour ride turned out to be an extended extreme workout instead of an efficient way to tour the countryside – – and to visit a spice farm. Many other bicyclists passed me, especially on the uphill.  I actually overtook a few going downhill.  Reason: the average American, such as I, weighs about 20 pounds more than the average Zanzibari.  Gravity is a big assist on the down slope. I even passed a few donkey carts guided by drivers standing Ben Hur style.  I really hope you recall Charlton Heston in the Oscar winning 1959 movie.  But I digress again.

Eventually, covered in sweat, we reached the spice farm. The proprietors there gave me different leaves, roots, and barks and asked me to identify each by scent. But I do not have a strong sense of smell.  I had no idea what was held under my nose.  So I just kept guessing cumin.  Eventually I got one right.

Who knew cumin and curcumin were non-related spices?  Cumin comes from the ground seed of the cumin plant – – a parsley relative – – and curcumin from the dried root of the turmeric plant. Or that rubbing fresh lemon grass on your skin will repel mosquitos? Sort of. Another digression, sorry.

In both Zanzibar and Iringa, my other training site, I delivered a week-long program of classroom training, small focus groups, and one-on-one consultations.

One-on-one topics were selected by the service providers and generally covered subjects related to the marketing lessons I had presented. Some examples:

I think that last bit of advice was the best I gave all week.