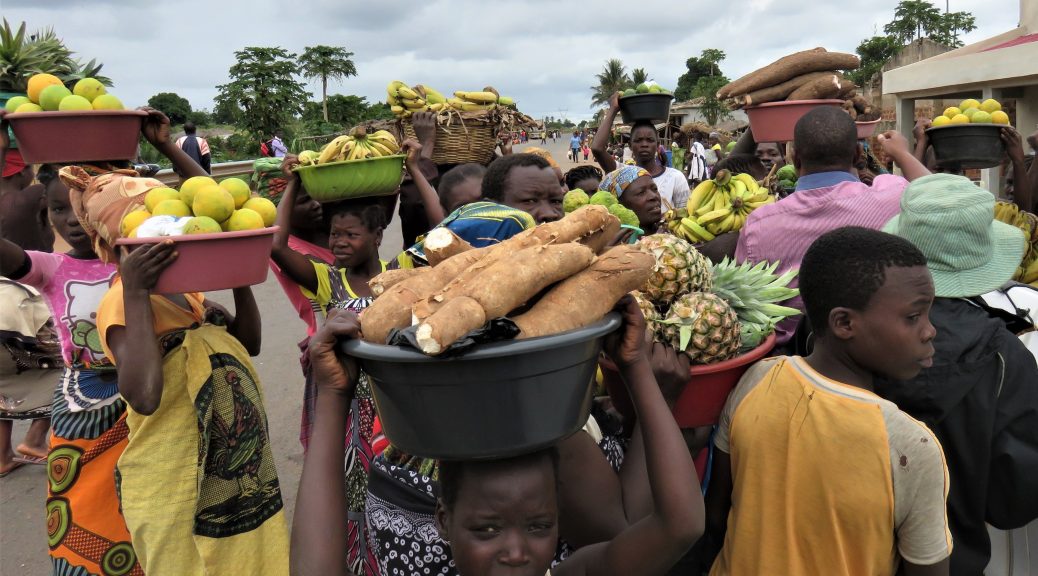 One of my NGOs, Winrock International, sent me on a three week assignment in northern Mozambique.  Our effort has been to develop a market intelligence system that will inform small holder farmers the current price levels for their crops.  At present, the farmer has little access to such information and thus relies on hearsay regarding prices. Often a crop trader will show up at his farm gate to purchase the crops.  The trader knows that the farmer is poorly informed and thus will offer a lowball price. The farmer will not know if other prices in the market are higher than the offer at farmgate…so he will accept the lowball price.

Our idea is to set up a price gathering system that is accessible by mobile phone.  Surprisingly, most farmers – – even poor farmers – – have cell phones.  With this system the farmer will be able to check current prices in his region and at major trading centers. He will not be at the whim of the crop trader to learn the price. Living the life of a small holder farmer is difficult enough without also being subjected to unreasonably low prices.

We gathered opinions about what sort of market intelligence the farmers wanted so as to allow them to make more informed decisions. We set up a series of interviews with farmers, grain transporters, wholesalers, and exporters.  Interestingly, most of the people we spoke to in the agricultural trade did not initially address price information as their greatest need.  Almost universally they said they wanted a governmental authority to regulate crop prices. By this they mean they want the fixed prices once offered by the Soviet-leaning government of the 1980’s and the Portuguese colonizers (until 1975) before then.  We explained that fixed prices are not likely to be instituted. The world has changed.  We operate in a market economy, not a command economy. And we now live in a globally interconnected world where the price paid by large importers of crops, like India, will influence the price small farmers receive at farmgate.  And besides, the government is too poor to provide a price guarantee.

Imagine that you are driving down a country road in Iowa and decide to stop to talk to a corn farmer.  But in order that you may converse you must first visit the county seat to get approval to hold a discussion.  This happened to us in Mozambique.

Before we could wander the countryside to talk to farmers we were required to report to the County Agriculture Manager to get permission.  The agricultural manager was out of the office and neither of his two lieutenants was willing to grant us authorization.  So we waited for the manager to return.  Once he appeared we explained our quest – – merely talk to several individuals in the county.  He decided that we needed permission from his boss, the County Commissioner. So we piled into our vehicles and drove across town to another office.  Again after waiting, we were ushered into the Commissioner’s office.  He and I discovered that we both had served in the army: Mozambican and US, respectively. Consequently we bonded and our team received permission to talk to people.

Later we also had to seek authorization to talk to traders in a farmers’ market…from not one, but two individuals: the business manager and the security manager. It seems bureaucracy is alive and well in Mozambique.  Fun fact: the first official we met, the Agricultural Manager, is the son of the second official we met, the County Commissioner…and was appointed by his dad. So nepotism is thriving here too.

After braving all this bureaucracy and a splash of nepotism, I needed a break. So, I went for a late afternoon jog past a high school that was just letting out.  A stranger jogging through the ranks of the students seemed to interest them.  I was enthusiastically greeted by shouts of “Americano,” “Branco” (white man), and also, “Mexico.” The Mexico greeting befuddled me, but had they inserted the adjective New in front of Mexico they would have covered my nationality, ethnicity, and state heritage within just a few strides.

The next day we interviewed Stefano Justin, a small scale maize trader.  He transports 330 pounds of maize in three large bags on his bicycle: two bags behind the seat and one bag in the bike frame above the pedals.  How he is able to ride this way was not clear to me, but he makes two trips daily across the nearby border with Malawi to sell the product in that neighboring country.  The customs officials turn a blind eye to small scale businessmen like him crossing the border. Stefano can earn $5 each day through his trading activities.  Now $5 dollars per day may not sound like a lot of money, but he assured us that he is able to support his family on this income.  This is well above the rate of extreme poverty, pegged at $1.90 per day. But, by the worn state of his clothing and the rickety repair of his bicycle one would never guess that he was earning a robust living at a level twice that of extreme poverty.

Traveling in rural Mozambique is always a visual treat. Alongside the highway were homes of sun dried mud brick topped with grass roofs.  So picturesque. The highway itself had few cars, but many, many bicyclists and pedestrians: school kids in uniform, farmers hoisting hoes on their shoulders, and rural vendors flashing small offerings of fruits, vegetables, nuts, and grains.  Bags of charcoal and bundles of grass roofing thatch were displayed.   The most eye catching of all were the poultry sellers.  They stood beside the road holding a live chicken upside down by the legs.  As our car passed they would swing the bird right side up causing it to flap its wings vigorously.  Passersby could not miss this advertisement – – more eye catching than a neon sign – – Eat Fresh Chicken Tonight.