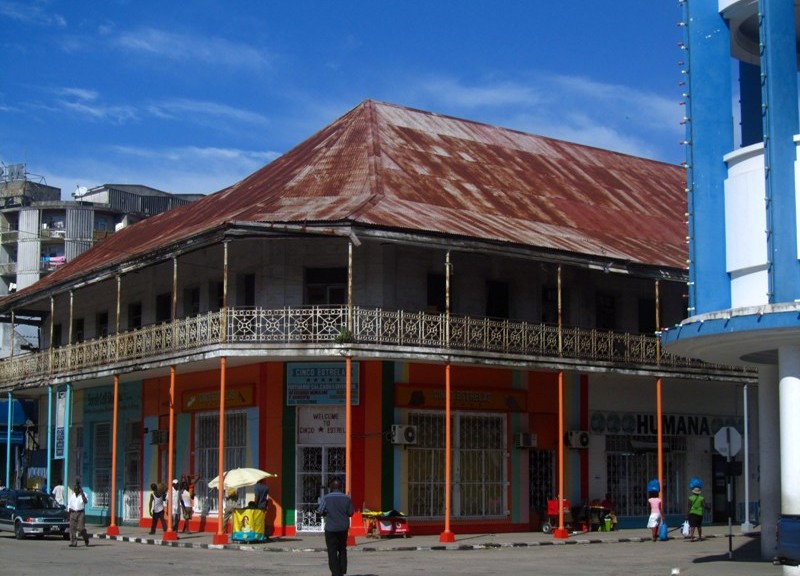 I have just started a new volunteer business assignment in Africa.  As with my recent work in Malawi I will be working on a USAID-funded assignment, managed by CNFA, the same Washington DC based NGO that sent me to Malawi.  In an effort to cover all the M countries in southeastern Africa before moving on, I will be working this time in Mozambique.  To find Mozambique, go to South Africa, then move one country north along the Indian Ocean.

I started in Beira, a major port, serving central Mozambique and landlocked Zimbabwe to the west.  Flying in on Monday I saw a patchwork of small fields around the city.  Rice was growing in many fields – – this part of the country is tropical, hot, and humid.  However, mercifully I have arrived at the beginning of the dry season and now it is quite pleasant…sunny and warm but not so hot.

Portugal colonized Mozambique and didn’t give up their colony until relatively recently: 1975.  Mozambique then fell into the Soviet orbit and suffered 17 years of the failed communist experiment.  But today it is a relatively successful developing country with a rapidly growing economy and a reasonably functioning democracy.  But poor: ranks 217 out of 229 countries tracked.

Walking around Beira I observed three eras of architecture:  1) Portuguese colonial style – – quite stately but somewhat faded, sometimes even dilapidated… not unusual in a poor developing country.  2) Some of the finest concrete-block buildings inspired by the Soviet Union.  Several buildings look as if the architect for the proverbial Moscow Hilton (ca 1960) was invited here to offer his bland rectangular grey concrete design.  3) And finally structures from the current era – -some quite chic and modern.  But scattered throughout all three eras of architecture (and far greater in number) are poor, ramshackle African homes and buildings.

After my work introduction in coastal Beira I have moved 120 miles inland to Chimoio, Mozambique’s fifth largest city (237,000) and capital of Manica province.  This highland region hugs Mozambique’s western border with Zimbabwe.  Before moving on, a quick aside about Zimbabwe:

Zimbabwe has been run into the ground by hero freedom fighter turned brutal dictator, Robert Mugabe.  His boneheaded policies have led to world record inflation, an inflation so rampant that Zimbabwe printed a 100 trillion dollar bill…written Z$100,000,000,000,000.  That’s a one followed by 14 zeros.  Now imagine trying to negotiate in a local handicrafts market for a carved wooden hippo.  Try to divide quickly in your head by 100 trillion to figure out the dollar price.  The Z$100 trillion bill was worth 30 cents (US) shortly before Zimbabwe eliminated its worthless currency and now uses only US dollars, Euros, and South African Rand.

But I own one of these Z$100 trillion bills (from an earlier trip) and recently tried to pass it off in my hometown bank by holding my thumb over “Zimbabwe” and  showing just the $100 trillion part.  The teller didn’t fall for it.  I think the image of Robert Mugabe instead of Abraham Lincoln spoiled my scam.  But I’m hanging on to it.  If ever the Zimbabwe dollar becomes legal tender again, I’ll be set for life.  But back to Mozambique…

I will spend the next couple of weeks in the highlands around Chimoio helping a farmers association develop a business plan designed to grow the size of their business.  If any of you need a good source of corn, soy, or sesame, please let me know.

To get a feel for this country, you should know that Mozambique is about 10% larger than Texas in land mass, but has a population slightly smaller – – around 23 million here.  This translates into a sparsely populated country with lots of open space, quite similar to Texas in this regard.  However, one major difference is that people here don’t often wear expensive cowboy hats.  There are other differences too.  Some of these will unfold over the course of my ensuing reports.