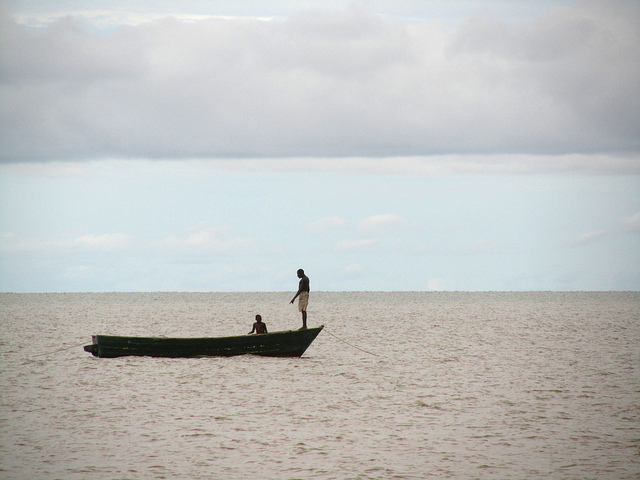 I have been on the job for one week now, working in Dwangwa, an agricultural trading center of about 20,000 people. This town is located in the central part of the country near the western shore of Lake Malawi. I am working with Tendai Poultry Feed. TPF is a very small company (five employees) that grinds corn, soy, and other grains, then mixes the grains along with vitamins into small pellets as feed for broiler chickens. They also make mash, sort of like muesli, as feed for laying hens. They sell this product in large 120 pound bags to local poultry farmers.

As in past international business gigs, my assignment is to introduce more modern business tools. In my first week I have helped TPF to track its sales and expenses in order to create a monthly income statement. Now for the first time they are able to discover at the end of each month if they have made a profit in the preceding 30 days.

And in order to increase the likelihood that they do make a profit, I have also helped TPF with a variety of marketing and sales activities. Together we have designed a small highway billboard. (While the highway is indeed small, I am referring to the billboard in this case.) We have also put together a program to distribute 2 pound sample bags of feed to prospective customers and have designed an appropriate accompanying label. In addition, we have created English and Chichewa handbills to post on telephone poles in the area.

One day last week, my translator and I rode a public minibus to the district capital to meet with the local radio station. We are crafting a radio ad. Any of you who have listened to rural radio in America’s heartland will know the tone of poultry feed ads: “Poultry farmers looking for high quality feed should know about Tendai Poultry Feed. We offer starter, grower, and finisher feed for broilers…” Those of you who have access to 101.9 FM in Malawi should listen to our new ad. You will need to have a basic understanding of Chichewa to fully appreciate it, however.

My translator’s name is Blessings Banda. While most people speak a modicum of English, for me to discuss topics beyond the social niceties, Chichewa is essential. And that’s where Blessings comes in. He also negotiates purchases for me so that I pay closer to the Malawian rate rather than the foreigner’s rate. And he is highly adept with document design software so that our handbills and sample bag labels look almost professional. For me, he is truly a blessing.

One experience I like to have on each of my assignments is to get a haircut. I don’t really know why I find this experience so enjoyable, but I do. Blessings took me to a barbershop on Dwangwa’s main street and passed on my instructions: clean up the back of the neck and around the ears; take no more than one quarter inch off the top and sides. The young barber seemed thrilled with his first white man’s haircut. Up until then he had cut only Malawian hair and virtually all Malawian men wear Michael Jordan-length hair. This is not my hairstyle. The young barber began joking and showing off to the ladies’ stylist, swooping the buzzing clippers over – – but slightly above – – my head. I felt obliged to ask Blessings to remind the theatrical barber to limit his removal to just one quarter inch. (Actually, I said one half centimeter – – about the same.) Fortunately, and somewhat surprisingly, the finished haircut was a fine one…perhaps in the top quartile of haircuts I have received during my lifetime. Beginners luck? And regarding value, at roughly 40 cents, easily in the top decile

And now a riddle: How many Malawians does it take to fill the back of a pick up truck? Let me answer that riddle in a round about way. After a productive first week, including a successful haircut, I treated myself to a weekend at nearby Ngala Beach Resort. Without my own transportation I elected to ride public transport along the highway alighting not more than a quarter mile from my weekend hotel destination. Public transport comes in many forms: comfortable large busses, crowded minibuses, and the alfresco ride in the back of a pickup truck. At the time I left, only the pick up truck option was available. At 86 cents for the 12 mile ride, I was quickly on board. (Compare that to the $55 taxi ride from my house to Boston’s Logan airport – – also 12 miles.)

I was among the first passengers to board so I chose a coveted seated position along the wall of the pick up bed. There were no benches so the other passengers and I perched ourselves on the narrow metal wall. Sort of uncomfortable, but still a seat, and my seat was next to the cab so that I would be able to enjoy the view as we motored along. As experienced elsewhere in the developing world, we waited until the pick up truck was full before departing. After 20 minutes waiting, and sitting on that narrow metal wall, my butt was getting pretty sore, but at least I had a coveted seat and the truck was nearing capacity.

The late arriving passengers could find no seat so they stood in the center of the bed. Now I want you to picture the first standing rider positioned next to the cab, he held on to the top of the cab. The next stander held on to him. The next in line held the passenger to his front, and so on. Ultimately we had a conga line of five standers. At highway speed, with the driver dodging the ubiquitous pedestrians and bicyclists, the final stander would essentially play a life and death version of crack-the-whip. Eventually, the truck could take no more, it was packed – – actually beyond capacity. So the answer to the riddle is that it takes 16 Malawians to fill the bed of a pick up truck. (Technically, 15 Malawians and one American.) We also had to fit in the contents of a small grocery store. One of the passengers had purchased enough foodstuffs in Dwanga to stock his store in Ngala.

The bed was so crowded that my body was bent in an unnatural position and my legs were twisted in a most uncomfortable way. But at least I had a coveted seated position. However, it turns out that 16 is not the correct answer to my riddle. Along the way we picked up more passengers. And a second grocery store. The number of passengers climbed. Some sitting on the metal sides, some perched on the bags and boxes of food, five forming the standing conga line, one mother on the pick up bed seated between standing legs while nursing her baby. It was so crowded that I was immobile and my twisted and tortured body could find no movement for relief. The only thing that took my mind off my increasing pain was the large bug that smacked into my cheek; I played the role of windshield for that bug. After my cheek stopped stinging my body pain returned.

In the developing world, low cost transportation is in great demand. And in case you are still curious, the correct answer to the riddle is 22. And that doesn’t count the two women and one infant in the cab with the driver. I think I’ll opt for the $55 cab ride next time.