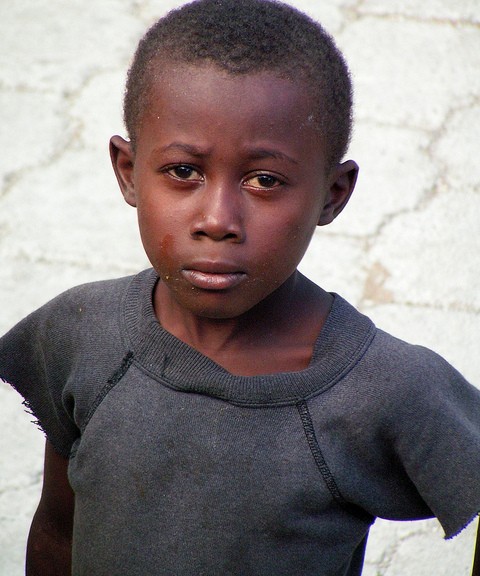 Haiti occupies the western half of the island of Hispaniola between Cuba and Puerto Rico.  (The Dominican Republic occupies the eastern half.)  Haiti is shaped like a backwards letter “C”, pointing westward.

Our six hour drive to Les Anglais took us to the far southwestern tip of the backwards C…through the massive damage in Port au Prince, through the earthquake’s epicenter several miles west of PAP.  There the paved road showed signs of earthquake stress: odd rills and ridges in the asphalt as if Mother Nature had held the roadway at either end and had shaken and twisted it.

But the most precarious part of the drive was when the pavement ran out, about 1.5 hours short of Les Anglais.  The dirt road clung to a bluff overlooking the Caribbean Sea to our left.  Water which sporadically rushes down seasonal rivers and gullies had washed out stretches of the dirt road.  This required us to creep along a two lane, reduced-to-one-lane road along an irregular precipice on our left plunging to the sea below.  Just glad that Rene, our driver was up to the challenge.

As it was we forded half a dozen rivers before reaching Les Anglais.  The final river was the largest and most challenging: maybe 50 yards wide, hub cap deep at the ford but deeper elsewhere, and flowing briskly.  Enterprising local river guides were waiting for us near the river.  By then it was too dark to discern the hub cap deep passage from the deeper car swallowing passages.  One of the river guides waded to the far side in front of our vehicle leading us across a known safe passage.

Our lodging for the next two weeks is at the home of Madame Alexander, the elderly mother of one of EarthSpark’s vendors.  Her home may be the nicest in this town of 5,000 people.  It is a relatively new concrete three bedroom construction.  My EarthSpark colleague, Allison, and I each have our own rooms, Madame Alexander, the other.  The house is spotlessly clean – – a small army of helpers sweeps, cleans, washes (and cooks) for her daily.

However her house does lack what most every house in Les Anglais lacks: running water and electricity.  I am already accustomed to bucket showers and bedtime preparation by flashlight.  Fortunately EarthSpark is in the clean energy business so my ES solar flashlight never needs replacement batteries.

Sleeping is damn hot though.  The temperature seldom dips much below 80 degrees, the humidity likewise rarely falls below 80%.  My bed is below the level of the high bedroom windows so a refreshing breeze never reaches me.  The mosquito netting around my bed protects me from potential malarial pests, but also traps body heat.  After a cool bucket shower, I slide slowly into bed and lie perfectly still to avoid generating additional body heat.  But that’s just life at the tip of the C.

Finally, the food:  lots of white bread, white rice, and processed cheese – – not my favorite cuisine – – but also fresh tropical fruits and fresh fish, so it all sort of balances out.