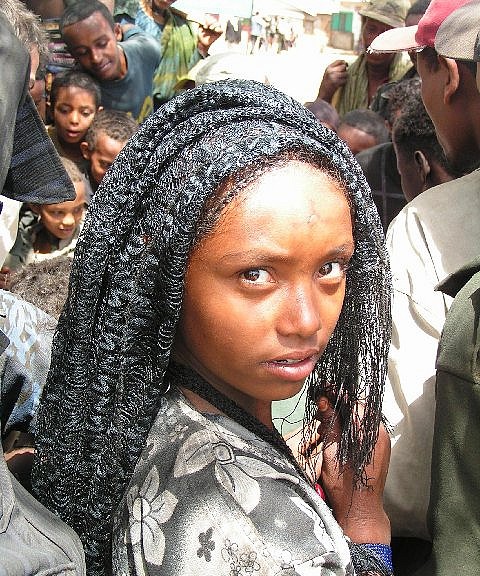 With perhaps the possible exception of Haile Selassie, Ethiopia’s most famous historical figure is Lucy, the 3.5 million year old hominid. Our suspected human ancestor is displayed in the National Museum in Addis. Actually, a copy of her skull is displayed. When you come to Addis be sure to check out her noggin.

Last Thursday I traveled with the SEF country director, Samson, and his executive assistant, Yikanu, to the Southern Peoples State. The name brings Mississippi to mind, doesn’t it? But this was not a trip to Mississippi; in fact this journey was a repeat of the first trip I took with SEF two months ago to observe our sales process to home owners in this southern region. The sales efforts were successful; we will install around 100 solar home systems. This recent trip was to check on the health and welfare of our 10-person installation team in the village of Abasuja and to visit two local families who had each had a solar system installed a fortnight earlier. Everyone was happy: the installation team had three rooms to sleep in at the local school, plus one more room to cook in. The locals were thrilled with light in their homes for the first time since Lucy.

But I wasn’t happy. We departed Abasuja after dark and got hopelessly lost on cattle trails (no road signs here) that wound tortuously from the village for nearly 20 miles back to the main road. In the pitch black African darkness, it was impossible to see the natural landmarks that had marked our arrival in the late afternoon. We had arrived too late, stayed too long, and departed after nightfall. Only spectacular flashes of lightening provided fleeting illumination of rural (very rural) Ethiopia. But we did make it back, eventually, to Addis Ababa where I caught a Friday night flight to Bahir Dar, around 300 miles north of the capital.

Bahir Dar sits on the shore of the Lake Tana, Ethiopia’s largest. The lake is more or less round, about 50 miles in diameter. At my charming, but rundown lakeside hotel, I discovered that several independent travelers had banded together to hire a boat to visit the lake and its ancient, but still active, monasteries. I joined them on a five hour excursion to three monasteries dating back four centuries. The first one, Kibran Gebriel, sits on a hilltop on a small island in the lake. Women are forbidden from entering this monastery for fear of putting impure thoughts into the minds of the 20 monastic male residents. (Sorry, I don’t make the rules.) So the several women in our group visited the nunnery at a nearby island, while the more macho contingent checked out the male-only island.

Out of respect for monastery rules, I would like to ask all female readers to stop reading now. You may pick up again one paragraph down.

Well, the monastery itself was closed on the day of our visit, so the women didn’t miss much. (Ladies, please!) However the head monk – – I am a bit unclear on Orthodox ecclesiastic titles – – escorted us to the storeroom where monastic treasures were safeguarded. He showed us an antique book of the Gospels written on goatskin, which he said was 900 years old. It was written in Ge’ez, the predecessor language of Amharic, and is still used in the Orthodox Church – – not unlike Latin in traditional Catholic churches. He removed this fragile volume from a shelf and then thumbed through the increasingly brittle and worn centuries-old pages. At most other places such a historical treasure would be under glass. Other valuable items included ornate crosses of various styles and also crowns, some donated by Ethiopian Emperors over the past few centuries.

Nearly all of Ethiopia’s Orthodox churches, including those at the three monasteries we visited, are built in the round…actually, more like hexagonal. Roofs are made of long juniper poles, cross hatched with smaller twigs, all ties together with goatskin strips and then overlaid with grass thatch. The outer walls surround an internal hexagon covered with orthodox art (similar to Russian Orthodox art) showing scenes from the bible (climbing Jacob’s ladder, Moses parting the Red Sea) or the activities of saints (St George slaying the dragon.)

After the monasteries, our boat driver took us to a river outlet on the lake’s edge: special because this is the source of the Blue Nile. (Which meets the White Nile in Khartoum…but we covered this geography lesson in an earlier posting.) We motored a few hundred yards into the river to a spot where purportedly one could observe hippos and crocodiles. The animals didn’t make a showing that day, but merely motoring out of Lake Tana into the upper reaches of the Nile was satisfaction enough for a geo-freak. And I consider myself one of these.

I attended a wedding in Bahir Dar. I wasn’t actually invited, but the event took place in the courtyard garden of my hotel – – not 20 feet from my room. So, I sat on the veranda in front of my room and pretended to read while the celebration took place. The bride wore bright blue (traditional color?) and her attendants had on eye catching peach dresses. Groom and groomsmen were sharply attired in well tailored tan suites. This was clearly an upper socio-economic class affair. The well turned out guests serenaded the union with, to my ear, very beautiful a cappella Amharic songs accompanied by handclapping – – theirs, not mine – – and also some celebratory ululating. I always love that sound.

I couldn’t bring myself to surreptitiously snap photos, but I thought about it. Tacky and intrusive was my ultimate judgment.

On Sunday I joined a German woman and a Belgian man, like me, both solo travelers, on a half day trip to the Blue Nile Falls. When at its best, some claim these falls rival the famous Victoria Falls in southern Africa. While picturesque, the Blue Nile Falls have not been at their best for over a decade. Ethiopia’s quest for electricity has greatly compromised the water flow. Above the falls the Blue Nile River has been side-channeled to a hydro power plant, reducing the current over the cataract by at least 90%. It is as if the impressive breadth of Niagara was shrunk to about 20 yards.

But the two hour hike to and from the dehydrated falls was a treat all the same. We crossed the 400 year old Portuguese Bridge, dating from Portugal’s brief and unsuccessful run at colonizing Ethiopia in the 1500s. (In fact, no country has ever colonized this nation. Mussolini invaded and occupied it for a few years during WWII, but Italy never colonized the country.)

We hiked through small farming villages with their picturesque thatched roof homes, past numerous shepherds, waded across two tributaries of the Nile, and were included in a photo shoot with some Ethiopian college students celebrating their recent graduation. All in all, not much water, but a fulfilling half day trip.

I had Sunday afternoon free to explore Bahir Dar so I rented a bike. At 64 cents per hour, the rental fee struck me as quite a bargain. I did wonder how a bike rental firm can pay back the $300 or so purchase price of a mountain bike at 64 cents per hour. Well, one way is to scrimp on maintenance. The front brake was non-functional: no break pads. The rear brake coasted the bike to a stop over half a block. Any quicker stop required the addition of foot dragging. The 18 gears had frozen into one, somewhere in the midrange of the gearing. And the tires leaked. I had to pay 27 cents at a sidewalk tire shop to refill the tires, then pedal like crazy back to the hotel before they ran flat again. And to those who love me, no, I did not wear a helmet. I don’t think they have them in Ethiopia.

To recap: the Blue Nile Falls don’t really flow, I didn’t see hippos, I wasn’t invited to the wedding, the bike really didn’t work…but at least I visited a monastery that no woman on earth has ever set foot in. So there.