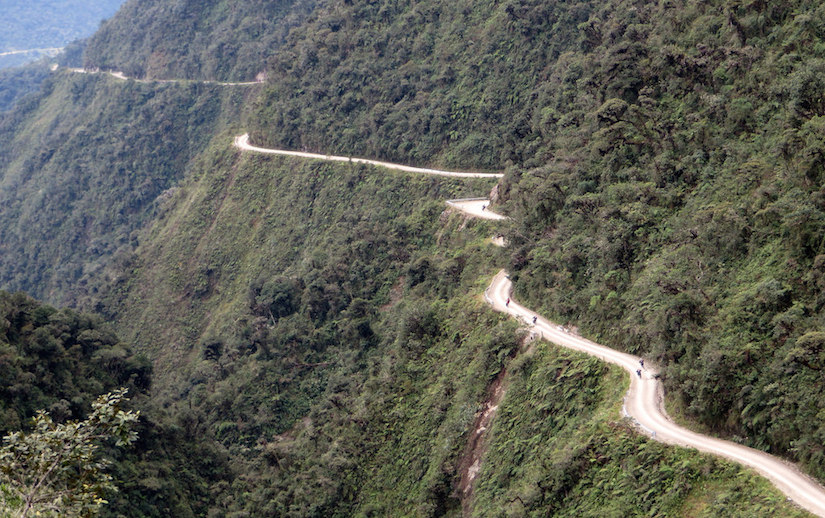 In 1995 the winding road from La Paz to Coroico was christened by the Inter-American Development Bank as the “world’s most dangerous road.” But since that moniker is sort of long and unwieldy, it is known locally as El Camino del Muerte: The Road of Death. I biked down it last weekend and survived to write this post.

But first, let´s talk business. I am nearing the end of my first month of work in La Paz; in a few days I will head home for Thanksgiving and Christmas, then return to Bolivia in January for a final month of work. Walisuma, the upmarket retailer of fine Bolivian crafts wishes to grow so that the increased proceeds from this non-profit organization can be channeled back to poor artisan producers in the countryside. The management of Walisuma is highly talented – – talented enough to ask for outside assistance to help them craft their growth strategy.

Last week we held a half day meeting to sketch the outline of just such a strategy. But before moderating this meeting I needed to understand what sort of artisan suppliers they relied on for product. The craft producers are typically quite small: A husband and wife duo make silver jewelry in their home. A five person leather workshop turns out fine purses, bags, and briefcases using simple cutting and stitching machines.

Only the textile producers who make alpaca sweaters employ more people. But they don´t employ them in a workshop. Instead they conduct “outwork” whereby they provide indigenous Aymara women with alpaca yarn, patterns, and simple looms. These outworkers produce the sweaters at home, while tending to their children and to their traditional domestic chores. The weavers bring the finished sweaters to their employers upon completion. The employers, in turn, deliver these products to Walisuma for sale (by consignment) in the Walisuma store.

With just enough newly acquired knowledge of how Walisuma works with its suppliers, I convened the half-day strategic planning meeting. We have tentatively decided to pursue four initiatives:
1. Add a mid-price product range aimed primarily at Bolivian clients – – those who cannot afford the current high prices.
2. Enter the international market with a focused product range
3. Add a web business
4. Open new outlets in Bolivia

The details of just how we will address this rather ambitious menu will be worked out when I return in January.

My weekends are free so I do my best to explore my current temporary home. A bike ride down the Road of Death seemed like suitable exploration. Early Saturday morning Gravity Assisted Biking, a tour company with a stellar safety record, bused 14 of us tourists from La Paz to a 15,400 foot high pass outside of town. There we received our $2,500 mountain bikes with hydraulic disc brakes. Since the Road of Death descends nearly 12,000 feet on a steep switchback lane over just 30 miles, top quality bikes with true stopping power were a must.

We descended from the high altiplano wearing layers of clothing topped off with warm foul-weather pants and jackets. We shed layers as we descended, arriving about six hours later in the Yungas cloud forest wearing shorts and tee shirts. The Yungas is in the upper reaches of Boliva´s Amazon Basin.

Now, going downhill doesn´t require a lot of exertion, just concentration. We had to share a one lane dirt and rock road with upward bound vehicles. By convention, downhill traffic (we bikers) had to ride on the outside – – the chasm side. And we were usually three feet from the edge. Not to worry, we all wore helments. But I doubt they would have helped much had we gone off the 1000 foot drop. Some drops, however were not so profound, just a few hundred feet of sheer cliff.

With disc brakes we were taught never to grip the front brake hard. The bike will stop abruptly and its rear wheel will somersault over the front. Well, the 22 year old Dutch lady hit a small rock, bounced a bit, and panicked. She threw on her front brake full force and found herself and her bike flying head over heels through the air. She landed on her back three feet from the cliff edge, bruised and likely chastened. Her bike was less fortunate. It somersaulted into the abyss.

But this story has a happy ending. The $2,500 bike hung up on a small tree jutting out from the cliff, about 20 feet below the lip. Our two guides used a saftey rope to rappel down to the bike and recover it.

I suspect the Dutch lady will never again slam on her front brake. I know I won´t.

4 thoughts on “World’s Most Dangerous Road”