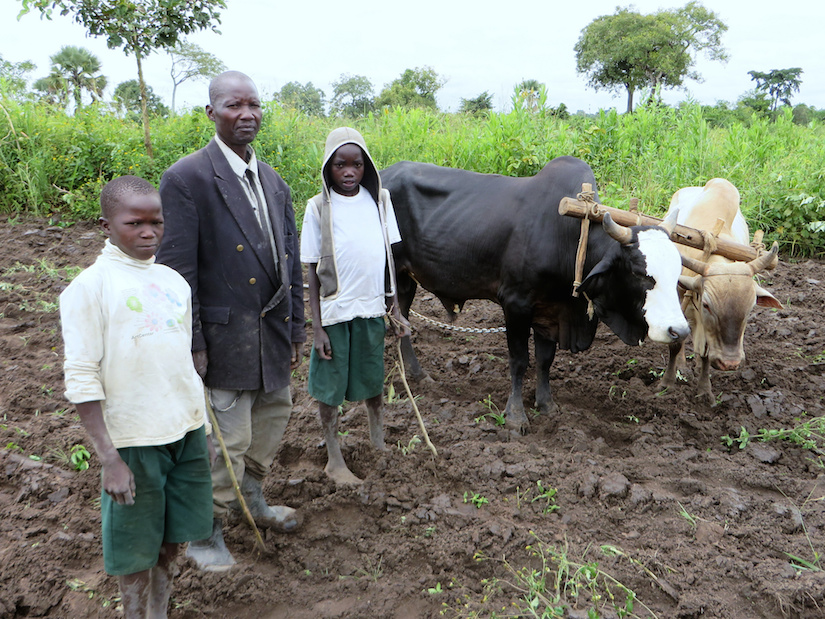 Back in Africa, I am just now wrapping up a 2.5 week assignment in Uganda.

Heading north from Kampala, the capital, we passed through rolling green hills, fertile fields of grain, bananas, coconuts, and vegetables, and crossed the Nile at Karuma Falls (more like rapids than a bona fide waterfall) before reaching Lira. Uganda sits astride the equator in East Africa and I am working not quite astride the equator near Lira a sizable northern regional town of 100,000. My clients are grain and legume farmers, growing corn, millet, soy, sesame, peanuts, and more.

I am providing leadership skills training to the management team of a rural farmers’ cooperative. We have covered co-op organization, ways to run effective meetings, the key elements of a business plan, internal communication, and conflict resolution. I am also teaching the rank and file members of the co-op the finer points of business communication so that they will be better able to engage with their customers.

At the first training session, I asked the farmers how they communicated with the buyers of their crops. One farmer raised his hand and answered, “Prices are too low.” Not exactly a response to my question. So I asked again how they currently communicate with buyers. Another farmer had the reply, “Prices are too low.” Still not getting the essence of my question, I asked once more and received the same response: “Prices are too low.” So, on the fly I adjusted my business communication class to include negotiation skills – – in the hope that better negotiation ability will increase the likelihood of receiving a fair price for their crops. And also in the hope that this topic would shut them up about those damn prices.

As usual, I spent the first couple of days of my assignment – – before starting the training – – by meeting a sampling of leaders and farmers to conduct a needs assessment. Otherwise, how would I know what I should cover in my training classes? During this needs assessment stage I visited the members of a Village Savings and Loan Association (VSLA.) They were meeting in a farmer’s well swept dirt compound under a large shade tree.

The thirty members of this VSLA meet weekly to set aside money for the future. They each bring their passbook to be stamped with the number of shares they save each week. Each share costs 3000 Ugandan shillings (about $1.15.) They are permitted to purchase up to five shares weekly. Thus the maximum would be nearly $6 savings per week – – a princely sum for a poor farmer. Their savings are pooled and they may borrow from their communal kitty for any need: seeds, fertilizer, children’s school fees, bicycle, cow. In fact, they are required to take out a loan from their VSLA each year. And they must repay the loan, plus 10% interest, before the end of the year.

There are no nearby banks in this rural area. And besides, the amounts saved would be below the minimum account requirement of most banks. So, the VSLA members secure their cash in a lock box that has three padlocks. Three different members each hold a key. Of course only one member will take the cash filled box home with him for safe storage…and then bring it back for the following week’s meeting. I would feel very vulnerable if the lock box were at my home, especially in December after a year’s worth of savings – – even with three padlocks.

At the end of the year the cumulative value of each member’s savings, plus the 10% interest earned from loan repayment, is returned to the members. But not quite 10%. The interest must be reduced by the amount of bad loans – – there are deadbeats in every group. If someone does not repay his loan, the VSLA will attempt to confiscate something of equivalent value from the deadbeat. Like his bicycle or his cow. Such is village justice in rural Uganda.

Following class one afternoon I learned that the farmers like to get together after a hard day of work in their fields to share the local equivalent of a cold beer. Late in the afternoon, while passing by a convivial group of 15 farmers, I was invited to join them seated in a circle around a large cast iron pot. In the pot was MARUA, a fermented millet alcoholic beverage. Six hollow reeds, three feet long, served as straws. They passed these six shared straws around the group so that all revelers could take sips of the hooch. One of the lengthy reeds came to me. (NB – the nearest Ebola case is still at least 2000 miles away.) Drawing a beverage up a three-foot long straw takes quite a pull. By the time it reached my mouth I was anticipating refreshment. It was lukewarm, slightly alcoholic, a little bit thick, and decidedly unpalatable – – easily ranking in the lower decile on my lifetime beverage list. But like the good soldier (that I once was) I swallowed it with a smile and passed the straw to the stranger next to me.