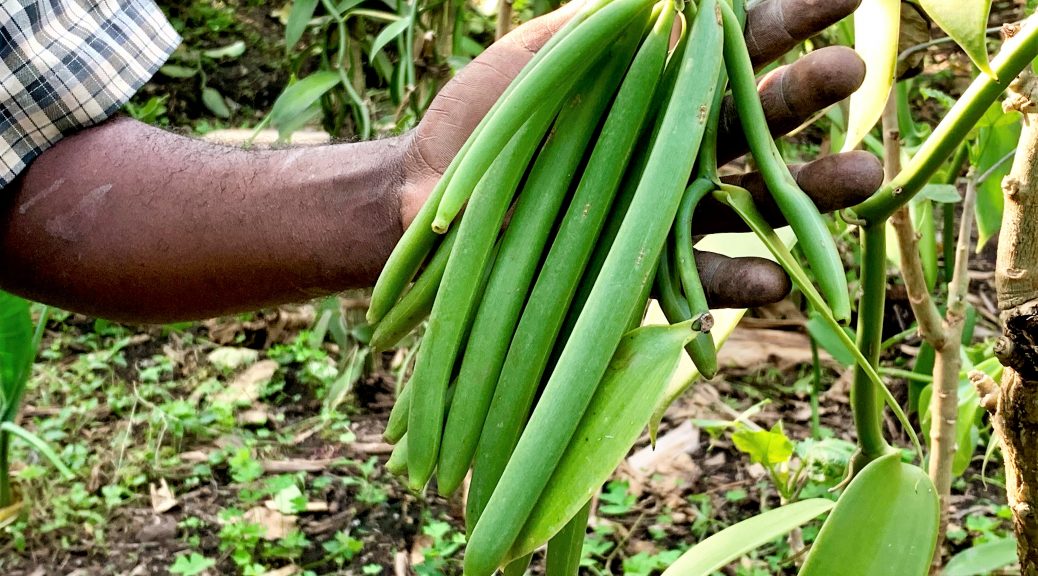 I have recently returned from an assignment in Kasese, western Uganda. My client for this work was Rwenzori Farmers’ Cooperative Union, a collection of over 3,600 farmers growing coffee, cocoa, and vanilla.  They asked me to assist them in developing a marketing plan that will guide them to greater sales of their crops, especially coffee and cocoa.  And they are focusing on those two crops because they have grown frustrated with the perils producing vanilla.

Vanilla is highly labor-intensive, causing it to be the second most expensive spice in the world (after saffron). It grows in pods, similar to oversized green beans.  Because it is high value and small, thieves have taken to sneaking into the vanilla fields and making off with the end product of the farmers’ eighteen months of cultivation (planting to harvest. ) In less than one hour, a croplifter can make off with nearly the entire crop.  Consequently, many of the farmers have shifted their efforts to coffee and cocoa.  Not nearly as valuable but also not readily susceptible to thievery.  For example, coffee picking requires the harvester to move bush to bush over several acres to pluck only the ripe red berries.  Then to return on a later day to pick the next round of ripening berries.  No thief wants to work that hard.

Vanilla hails originally from Mexico where the vanilla vines are pollinated by Melipona bees.  Once the vines were exported to and cultivated in Asia, Polynesia, and Africa, farmers discovered a problem: No Melipona bees to perform pollination.  Some ingenious guy – – reputed to be a young slave in Reunion Island in the Indian Ocean – – figured out how to hand pollinate the plant.  The plant offers just a 24 hour window when the flowers are open for pollination.  So, the farmer must continuously roam his few acres to discover which flowers have just opened and are available for his deft fertilization touch. After his handiwork, the farmer must wait nine more months for the full 6- to 10-inch pod to develop.  Inside the pod are thousands of tiny spec-like vanilla seeds.  You have seen them in high quality vanilla ice cream. And outside the pods are any number of thieves roaming around ready to relieve the farmer of his hard work and valuable crop.

I met with a group of farmers to learn about their crops.  Since I came from America and also spoke nearly flawless English they assumed I was a crop expert.  I am not. They asked me which additional high value crops they should plant, making up for vanilla theft. I had no idea, but I didn’t want to disappoint them so I quickly ran through my mind all of the produce I like at Whole Foods that is even more expensive than everything else at Whole Foods.  With only a slight pause to think, I rattled off saffron, macadamia and cashew nuts, red and black pepper corns, cinnamon, passion fruit and mango.  Any of you agronomist readers might want to weigh in here on high value crops.  I also passed along the farmers’ query to the agricultural experts at my NGO since my answer was far from complete and farther yet from actionable.

At another session with farmers we brainstormed brand names for their coffee. We came up with some ideas that they will test with their customers and run by trademark lawyers. For example: Mountain Grown and Uplands Natural. They also wanted to consider some brand ideas in Lukonzo, their local language.  They particularly liked Enzururu and Abanya Kithwe.  The former means snow and the latter, native of the mountain.  I did my best to convince them that if they had aspirations of exporting their coffee brand to Europe or America, few westerners could remember or pronounce Enzururu and Abanya Kithwe.  This probably holds true for words from the other 40 languages spoken in Uganda.

Two nine-year-old boys overtook me on the street in Kasese, my assignment home base.  “Hello father. we are starting a football team.  Do you want to be our coach?”  Apparently they didn’t know that my football career peaked in 9th grade when I was the second string QB.  I averaged minus two yards per carry.  I threw one pass that season.  It was intercepted. The next year on the sophomore B team, I didn’t even rank second string.  Mercifully for the coach, and I guess for me too, I broke my ankle and did not complete the season.

But the boys were not curious about my American football experience.  Of course the football they were referring to was soccer, known everywhere in the world as football – – except in the U.S.  What these youngsters also didn’t realize was that I had never touched a soccer ball until college intramurals, never set foot on a soccer pitch until then, never saw a soccer match until college. I was woefully unprepared to be a soccer coach.  However, that didn’t stop me from writing a 9th grade essay comparing and contrasting football and soccer.  My major finding was teams in both sports field an 11-man squad. Profound.

Once I begged off the coaching invitation – – due to the fact I was scheduled to leave Kasese in two days – – they shifted their request from coaching to the purchase of a soccer ball.  In fact, I suspect this was their real goal all along. They just wanted to butter me up with the coaching request.

3 thoughts on “The Vanilla Thieves”